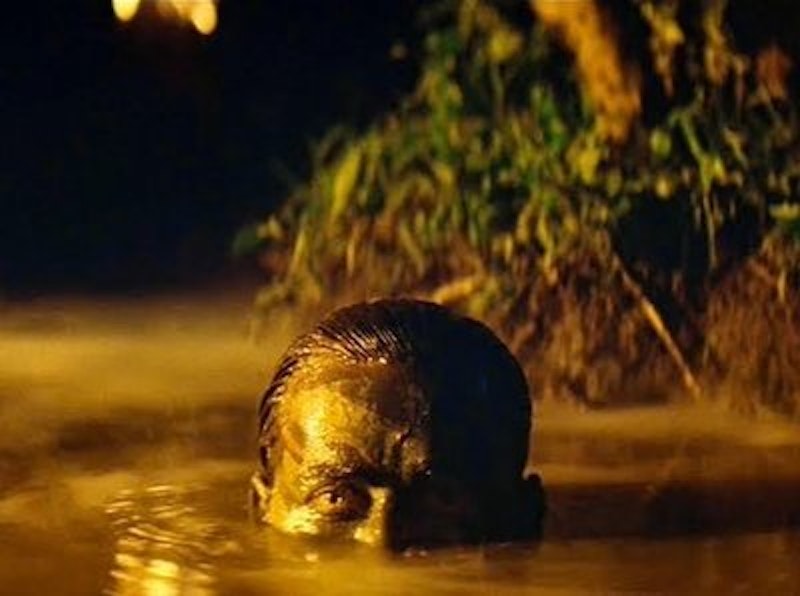 This is part of a series on latter-day U.S. colonial wars. The previous installment, on Predator, is here.

At the conclusion of Apocalypse Now, Captain Willard (Martin Sheen), covered in mud and blood and holding a saber, steps out onto a raised platform looking down at the Vietnamese montagnards gathered below. Willard has just killed the insane Commander Kurtz (Marlon Brando). Kurtz was, supposedly, beloved by the primitive, easily awed populace; you'd think they'd be pissed at the guy who just executed their hero. But to the gathered throng, one white man is as good as another; the Vietnamese do not attack Willard. Instead, after a pause, they inevitably drop to their knees, overawed by Willard's presence, or his destiny, or simply by his whiteness.

The scene is visually dramatic, not least because it is a racist cliché. Masses of natives showing obeisance is a stock pulp trope, from old serials through films like The Man Who Would Be King (1975) and Return of the Jedi (1983) and beyond. Apocalypse Now is sometimes touted as an anti-war movie, not least by its director Francis Ford Coppola. But its imagery doesn't challenge the logic of imperialism. Instead, it borrows liberally from stock iconography of savagery and colonial adventure. It cosigns and codifies the racist pre-conceptions that made America's involvement in Vietnam possible.

The logic of colonialism is based in binary logic. The colonizers are civilized; the colonized are not. Some justifications of colonialism (as in Kipling's "The White Man's Burden") claim it is the duty of colonizers to bring the virtues of civilization to the hinterlands. There’s a parallel discourse, however, in which the exciting barbarity of the backwaters is viewed as a kind of stimulating resource. The Western world is effete, boring, and staid. Real visceral excitement, in the form of violence, adventure and sex, is there in the dangerous, maddening wild. When Willard went home to America, he tells us, he dreamt of the jungle. His wife couldn’t satisfy him; they divorced, and he returned to the humid folds of the east, which (we are to believe) spread wide to receive him.

According to the putative plot, the Vietnamization of Americans is ugly and twisted. Willard’s commanded to kill Kurtz because Kurtz has gone insane, his methods are "unsound," and he has become murderous and untrustworthy. But while the film generals mouth condemnations, the director, and Willard himself, tell another story. Kurtz's passage upriver has not made him less fit or less sane—it has made him more honest and more authentic. Colonel William Kilgore (Robert Duvall) is as murderous as Kurtz and as callous; "I love the smell of napalm in the morning!" he famously booms. But Kilgore is not a danger to the brass—he plays Wagner as his helicopters swoop in, and he's obsessed with surfing. Kilgore in short is soft and ridiculous. His is the bland murderousness of civilization, in contrast to the earthy, sweaty murderousness of the bush.

Willard vocally praises Kurtz throughout the film, talking about his genius, dedication and honesty. That honesty is epitomized by his murder of four South Vietnamese officers who were apparently in the pay of the North Vietnamese. Kurtz can see deceit, and refuses to kowtow to diplomatic niceties when there's a war to win. To be authentic in Apocalypse Now means that one recognizes that all Vietnamese, South and North, are really the same. Kurtz recognizes that there are no real ideological differences between North and South Vietnamese. All are treacherous, bloodthirsty and silent. There’s virtually no Vietnamese person in the film with a speaking role, as critic Linh Dinh notes in a searing Guardian review.

But it's Apocalypse Now's much-praised visuals that really make the case for the excitement, realness, and vividness of the colonies. Going into the heart of Vietnam is pictured as a visceral descent into savagery. The captain of Willard's boat is killed by a thrown spear; the jungle itself is festooned with dead bodies hanging from trees and skulls. In one iconic scene, a soldier chatting about French cooking is set upon by a tiger. Kurtz himself is filmed in shadow, his face moving in and out of the primordial blackness.

To kill Kurtz, Willard plunges into the river, emerging completely covered in mud, which he wears as a kind of brown face. This scene is echoed in numerous other war films—Schwarzenegger caked in mud in Predator, or Stallone concealing himself in the jungle in the Rambo films. The colonizer becomes the colonized, turning more savage than the savages themselves.

The killing scene is perhaps the most celebrated moment in the film. Willard (with Kurtz's tacit approval) hacks Kurtz to death with a machete, while, outside, Vietnamese people ritually slaughter a live cow with blows from hacking blades. Willard's murderous assault is conflated with the practices of the Vietnamese; he is, supposedly, one with their ruthlessness and pre-civilized viciousness. Kurtz reminisces earlier about a (made up) Vietnamese atrocity, in which Viet Cong chopped off the arms of children inoculate with polio. If only he’d had such men under him, Kurtz mutters, he could have conquered Vietnam once and for all. Now Willard has become one of those deadly men, severed by his own sword blows from civilization with its weakness and its namby-pamby lies.

That's why the Vietnamese kneel to Willard at the end of the film. He has become one of them, and since he is a white guy, in becoming one of them he is automatically the ruler. Willard has gone into the heart of darkness and been transformed; he has become the jungle. In killing Kurtz he has found himself, the Great White ruler, baptized in blood and savagery and power.

Apocalypse Now is often cited as the Vietnam War film. Linh Dinh, for his part, questions whether Coppola's film is really about the war at all. Dinh is right: it’s precisely because Coppola doesn’t actually care about the war that his movie is the quintessential American vision of the conflict. The Vietnam War, in Apocalypse Now, is not a question of policy or even morality. It’s an opportunity for growth; a kind of spiritual extreme sports exercise. America is weak, boring, sunk in its bland ethics, civilized norms, and banal pastimes, like surfing and cooking French sauces. Of course, the Vietnam War is ugly. But what a beautiful, transcendent ugliness! Coppola asks you to worship Apocalypse Now as the Vietnamese worship Willard—because it’s violent, terrifying, "real," and white.