The joy of fainting masculinity in Bringing Up Baby. 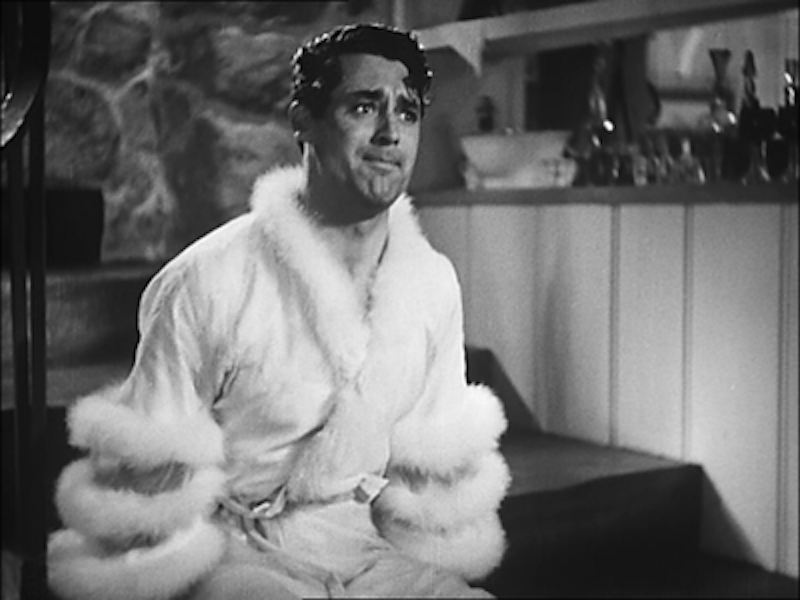 "I just went gay all of a sudden!' David Huxley (Cary Grant) declares in perhaps the single most famous line from Howard Hawks' 1938 comedy Bringing Up Baby. Grant says the line to facetiously explain why he's wearing a poofy, frilly woman's bathrobe. It's probably the first time "gay" was used to mean "homosexual" in a mainstream Hollywood film, and Grant milks it for all its worth. He delivers the words with an exasperated, flamboyant hop, as if the bathrobe cannot contain the camp that’s bursting out of him, like a fine spray of downy tassels.

David's enforced humiliating feminization is not a single-scene phenomenon. It's the whole point of the movie. From the first moment he steps on screen, David’s presented as an unmanly man; in the first dialogue of the film, David's fiancé, Alice (Virginia Walker), tells him they aren't going to have children or, it sounds like, sex after they're married. Screwball comedies are celebrated for their strong women characters, but what really sets Bringing Up Baby apart—even from other films in its genre—is its celebration of masculine weakness and femininity. Men on film, even today, rarely get to be dishmops; even nerdy sub-heroes like those in Dude Where's My Car end up doing heroic things via the miracles of karma and plotting. But David remains simpering and put upon to the last—and is all the more lovable for it.

David's non-maleness is connected to his profession; he's a paleontologist, obsessed with the finicky task of building a brontosaurus skeleton. In his effort to butter up a wealthy donor, Elizabeth Random (May Robson), he stumbles into her niece, the impetuous Susan Vance (Katherine Hepburn.) Susan falls in love with David, and sets out to derail his impending marriage. Hijinks, involving dinosaur bones, a dog, multiple leopards, and a confused sheriff, burst on the screen.

Most romantic comedies, from His Girl Friday (1940) to Say Anything (1989), have the boy chasing the girl, or (as in the 2004 Jennifer Crusie novel Bet Me) are built around mutual attraction and mutual reticence. It's hard to think of another film in which the initiative and driving force of the romance is so entirely on the woman. It's not just that Susan tricks David into taking her and adorable pet leopard to her aunt's estate, and it's not just that she keeps him there by stealing his clothes (forcing him to don that frilly bathrobe). It's that she's the only one of the pair who acts on not just love, but lust.

David does seem to feel lust; he tries to kiss his fiancé at the beginning of the film, and expresses mild disappointment when she rebuffs him and says they aren't ever going to have sex. But despite that initial flash of concupiscence, David is to all appearances completely and impressively immune to Katherine Hepburn's considerable charms. In It's a Wonderful Life, when George Bailey is confronted with a woman who has torn her clothes, he sees the lascivious possibilities immediately. "Hmmm… A man doesn't get in a situation like this every day," Jimmy Stewart mutters. But in Bringing Up Baby, David is moved only by an excess of embarrassed propriety when Susan rips open the back of her dress, exposing her underwear. For Groucho Marx, or virtually any other comic scriptwriter, a woman's wardrobe failure would just about contractually require innuendo. But stuttering, prudish David is pure of heart, thought and penis.

Susan isn't, though. When the two are hunting leopards on Susan's aunt’s grounds, David falls and smashes his glasses. Susan purrs delightedly, "David, you look very handsome without your glasses." David doesn't gaze; his eyes (and the camera) do not linger longingly on Susan, or frame her as desirable. But Susan does see; she objectifies David, not the other way around.

Usually Hollywood likes to bring feminized male heroes out of their nerdy shells, allowing them to perform heroic feats to win the leading lady. But Bringing Up Baby doesn't work like that. At the end of the film, Susan lassos and corrals the dangerous circus leopard, dragging it to the police station as it snarls and snaps. David does back the animal into a cage… but right after doing so, he passes out. "David, you fainted," Susan quips deadpan, her praise for his heroism dying on her lips. In the last scene of the film, David declares his love and admits he had a great time with Susan. But then she breaks his brontosaurus—a castration metaphor, considering that partway through the film she starts calling him "Mr. Bone." The movie ends, not with David signing on for more and greater adventures, but with him whining softly. He hasn't become the man he was always meant to be. He's just resigning himself to having been chased down.

According to Laura Mulvey's gaze theory, men are supposed to watch film in order to feel empowered; you identify with the main character as he conquers leopards and leading ladies alike, and feel with him the rush of narrative and erotic vim. The truth, though, is that all that vim can get old. When the man on-screen is always in control, snatching victory from the jaws of inadequacy—when even dopey nerds, like Shaun in Shaun of the Dead, somehow manage to heroically save the day— it's not just boring, it's oppressive. Most men aren't especially heroic; most don't experience the world as a narrative of triumph centered on their exploits. There aren't many Hollywood films for guys who are caught up in narratives they don't control, who lose their gold balls, tear their dinner jackets, and generally muddle through without notable bravery or distinction.

The reason, "I've just gone gay all of a sudden!" is so funny is that, while the line does traffic in stereotypes about gay effeminacy, the film as a whole doesn't actually judge David harshly for his lack of manly manliness.  Shaun in Shaun of the Dead is a loser and a drip for failing to live up to heroic narratives, but in Bringing Up Baby, neither director Howard Hawks nor anyone else in the film really expects David to face down dangerous leopards single-handedly. He's an ineffectual professor with a pretty face and a (mostly) good heart. For guys who aren't likely to ever defeat a villain, or face down a wildcat, it's nice to know that even those who faint in the face of danger can be captured by a happy ending, too.