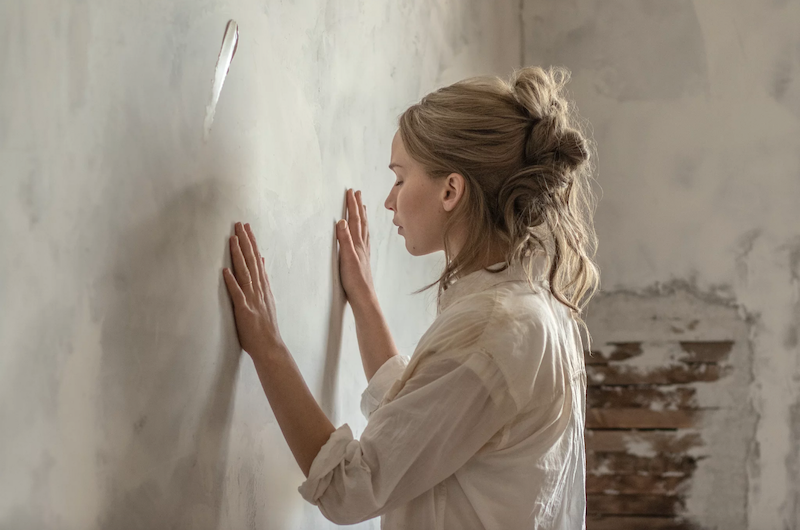 Darren Aronofsky’s mother! could be described with any number of words, but the best one is “batshit.” I mean that in the nicest way possible. It’s going to be divisive, and it’s going to set off some angry debates, but I found it delightful.

The film is an unsettling psychological thriller that goes for broke, and I admire it for both its unceasing momentum and stunning audacity. mother!, which Aronofsky wrote and directed, is set entirely within an old country house, of indeterminate physical location. Javier Bardem is a famous poet wracked with writer’s block, while Jennifer Lawrence plays his much younger wife, in the latter stages of restoring the home.

One day Ed Harris shows up, as a mysterious visitor, and then later Michelle Pfeiffer appears as his wife. Pfeiffer is so fantastic in this role—every word out of her mouth is so cutting. The 59-year-old Pfeiffer is rarely cast anymore—more famous in the last decade for appearing in song lyrics than for movies—but this is a welcome comeback. Lawrence, following a meteoric rise, has been on a losing streak, and the less said about last year’s Passengers, the better. But she’s strong here, playing different modes and convincing in all of them.

There are hints of mental illness—echoing the director’s Black Swan—as well as fears, from loneliness to isolation to the terror of disrespectful houseguests. It’s one of those films—I was reminded of The Devil’s Advocate, released 20 years ago next month—in which things get more and more ominous as the film goes on. But this time, the direction isn’t obvious. I’m just thankful that it doesn’t end like Psycho, with a five-10 minute exposition dump.

What’s the film “really” about? There’s no definitive answer, although I can think of one strong possibility. I’m not quite sure I buy the theory that it’s all one big allegory for Aronofsky and Lawrence’s real-life relationship, since Lawrence is the more famous of the two, and they supposedly didn’t get together until the start of production.

Aronofsky, known for meticulous and pored-over productions that often gestate for years—his previous film, the underwhelming 2015 biblical epic Noah, was a years-long undertaking—but mother! was written in days and filmed relatively simplistically (except for the part with dozens of stuntmen). This doesn’t quite touch the best films of his career—Black Swan and The Wrestler—but it’s certainly in the next tier.

mother! is not for everyone. But it’s going to set off a lot of passionate arguments—both about what’s really going on, and about whether they just watched was brilliant, or appalling.

The Rebel in the Rye Plagued by a Bad Script. C

The life of J.D. Salinger gets the relatively rote biopic treatment in The Rebel in the Rye, an impressively attractive and well-mounted production that nevertheless conveys just about no understanding of who Salinger was as a person or a writer.

Rebel follows Salinger from his youth in the 1930s through his disappearance from public life in the 1960s. It depicts the famous writer as a smug crusader against phoniness, much like his literary avatar Holden Caulfield. We see him struggling as a young writer, caught between two father figures: his distant actual father (Victor Garber) and his professor/mentor (Kevin Spacey).

The film’s general theory on Salinger is that his experiences in World War II scarred him irreparably, and likely had something to do with his disappearing from view, although it also shows him as generally arrogant all down the line. And beyond that, it doesn’t really care a great deal about Salinger’s actual literary work.

Filmmaking-wise, though, it’s top-notch. The midcentury photography and production design is impeccable. Nicholas Hoult nails Salinger’s cockiness and pique, and Spacey’s wonderful too; it’s been awhile since he was given anything to play besides menace. The Rebel in the Rye was written and directed by Danny Strong, who played the short guy who got fired on Mad Men, wrote all those political tick-tock movies on HBO (Recount, Game Change) and has been the showrunner for most of the run of Empire. The direction is fine: it’s the script that’s the problem.