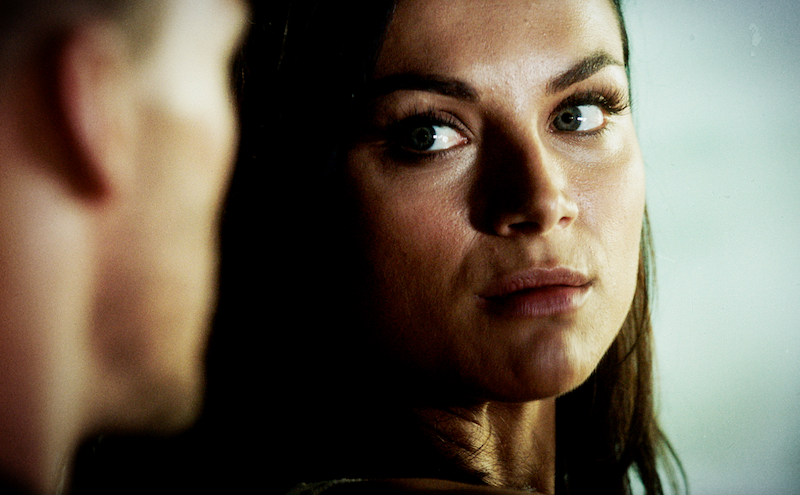 After an extended television season of gory deaths and rape fantasies, a sexbot attains sentience while the master meta-manipulator of the show's plot achieves quasi-salvation by orchestrating his apocalyptic end.

The above will read, to most TV viewers, as a thumbnail description of the critically acclaimed HBO series Westworld, in which people pay to participate in a fantasy western adventure populated by advanced robots. But the sex and blood and meta-entertainment conceit also fit Blood Drive, Syfy's insistently low quality sexploitation romp, which aired its final episode last week.

Blood Drive is ostentatiously crap. Set in a post-apocalyptic America in which racers drive cars fueled by blood across a blasted landscape, the show takes inspiration from 1970s and 80s exploitation cinema. Its best episode involves a diner in which the chefs secretly serve human meat; another episode features a mystical energy that turned all the characters into Cronenberg-esque sex zombies.

Yet, the things that mark Blood Drive as bottom drawer crap—the sex, blood, full frontal nudity—are the same tropes which make Westworld a highbrow critical darling. HBO shows are adult and serious because they show unflinching violence and unvarnished sex. Gruesome dismemberment and piles of bodies on Westworld are a demonstration that the show is committed to real issues. On Blood Drive, the same piles of bodies are presented as a gross-out appeal to the basest instincts. When a quirky sexbot rapes a cop on Blood Drive, it's supposed to be a queasy prurient S&M fantasy inducing giggles. When you get a glimpse of a woman torturing a sexbot in Westworld, it's also meant as a joke of sorts—but you're supposed to meditate on the ethical ramifications and admire the show's bold truth-telling.

Blood Drive is aware of the link between sexploitation and quality television. The tip-off is that its lowbrow imitation extends not just to the sex and blood, but to the meta-commentary. In Westworld, the park’s run by Dr. Ford (Anthony Hopkins), a godlike, ruthless designer who manipulates humans and robots alike in a complicated, layered, masterful scheme. Ford is a metaphor for both the TV showrunnners and God. As such, the very perfection of his plotting is a kind of meta-tribute to quality television itself, with its intricate arcs and complicated twists.

Blood Drive has a master showrunner too; the flamboyantly rotten-toothed Julian Slink (Colin Cunningham). Slink is the master of ceremonies of the Blood Drive race; he's in charge of recruiting racers, planning out plot arcs for the enjoyment of viewers watching at home, and blowing up the brains of racers who break the rules or finish last. Like Dr. Ford, he's a stand in for the showrunners.

Unlike Ford, Slink doesn't observe his plotting from a godlike perfect distance. Instead, Cunningham plays Slink with manic, paranoid camp. Ford is piously above the fray, and murders with a distanced noblesse oblige. Slink is joyously rabid and sadistically petty. In the final episode, he chortles with glee when he tells the protagonists that he's lied to them about the bomb, and they have five more minutes than they thought they did.

Slink's love of his job is also his vulnerability. Ford answers to no one… but Slink's Blood Drive is run by corporate executives at the sinister Heart Enterprises. Slink proposes story ideas—and Heart executives come back with lists of story notes, which Slink receives with sniveling resentment. One of the series' best set pieces involves Slink waiting outside the executive offices for the entire day, trying to get an appointment. Finally, convinced that the person waiting with him has been offered his job, Slink beats the poor guy to death with his briefcase, in a red spray of economic anxiety, creative frustration, and bodily fluids.

Westworld presents television as a quality format, offering its viewers an intricate, individual creative vision. Blood Drive presents television as a compromised mess. Slink sees himself as a creative visionary because he murders people in inventive ways. Meanwhile his bosses interfere for obscure reasons, or no reason at all, demoting him to janitor at random or trying to murder him. Literal corporate backstabbing—in which sharp objects are plunged through the bodies of other executives—is common. In order to climb the executive ladder, one ambitious woman has to fashion herself a bloody male skinsuit. Television on Blood Drive is messy, sexist, gross, stupid in intent, and stupider in execution. It's part of the corporate conglomerate that has hollowed out America's public institutions and turned the country into an amoral, brutalized and brutalizing wasteland.

Blood Drive isn’t a perfect show, and it’s not better than Westworld in every respect. The acting on the Syfy show (outside of Slink) is very dicey. The romance plots are unconvincing and the story's fascination with the moral struggles of good-guy cop Arthur Bailey is unaccountable and misguided.

But the missteps are, in a way, the point. Westworld, and quality television in general, present a slick surface of earnest meaningfulness; they encourage viewers to admire the beautiful mechanism. Blood Drive insists that the mechanism is made of meat. It wants you to consume your entertainment in full knowledge of how the bloody sausage was made.