The State Is the TV Event of the Year

A powerful look at ISIS and Islamic jihad. 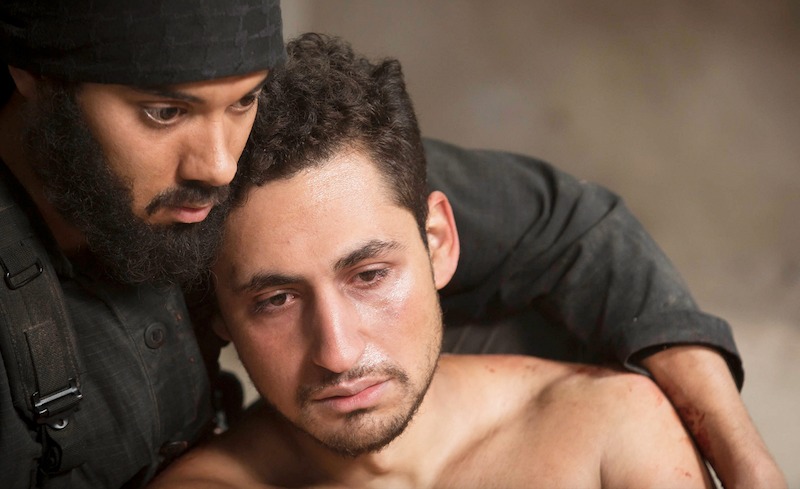 The State is a four-part drama about British migrants who flee the UK and travel illegally to Syria to join the ISIS caliphate in 2015. I haven’t agreed with the criticism I’ve read by British journalists, and as it’ll premiere in the US on September 18, I wonder what reaction it’ll have in Trump’s America, especially with the continued cultural wars between left and right. I think it’s the TV event of the year, but it’s variously described as “Islamophobic,” “irresponsible” and like a “Nazi propaganda film of the 1930’s.”

In reality, it has much in common with the Nazi drama Downfall and the recent sleeper hit Get Out, and is also a vital sociological document, which, when ISIS is eventually annihilated, future generations will refer to with reverence. That’s if—in the age of North Korean nuclear weapons and Islamic suicide attacks at pop concerts—we have a future.

The two leads, Sam Otto and Ony Uhiara, play the roles of very different characters. Both are extraordinary. Otto’s character, at heart, is motivated by love. His fate in the caliphate is fitting, tragic, and affecting. Uhiara is motivated, in an odd way by feminist ideology, and fanatical Islam. The final line is so perfectly timed: it reverses our perspective on the character it’s spoken to with such force and truth it could well convince many of the 35,000 Islamic fundamentalists living in the UK to repent. That certain critics have interpreted The State as dangerously sympathetic to ISIS, that it’s a de facto advertisement for travellers to Syria, is so deluded it makes me wonder about their intelligence.

Peter Kosminsky, the writer/director, spent 18 months with his research team (led by Ahmed Peerbux), and The State is a thrilling journalistic achievement.

What does ISIS eat? How do they spend their days? The filmmakers set out to faithfully recreate the caliphate, from its Sharia police, women clad in black with AK-47s on their shoulders, to the delight of a 10-year-old British boy at how “cool” it is to have to eat with you fingers before gradually being trained for the front lines, to ISIS beheading videos, to recent converts frolicking and playing in a swimming pool after training. It’s a dizzying achievement, and in these politically muddled times, something with this urgency and evident genius can be hard to take.

My dad, who wouldn’t read my novel, but loves my articles for Splice Today, refused to watch The State. But for the politically-motivated individual, a narrative this engaging, and put forth with such economy (this is TV, not film) and clarity, is also possibly difficult for the battle weary of the right and left, no matter how intelligent. It’s shockingly brutal, unbearably evil, but so clever and careful with its shocks, delivered with such empathy, that any hysterical critique indicates a fundamental misunderstanding.

I mentioned Get Out earlier, (which had muddled plot twists) and relate it to The State only in that it shares its ethnic camera. Whites in The State, as in Get Out, are curiosities: this is not shot from a white perspective. That Kosminsky himself is white may make this sound impossible. The State stars Muslim and black actors, and the token whites stand out. The American head of the female hostel, played with demonic sincerity by Jessica Gunning, thoroughly enjoying war-ravaged Syria and the Sharia, and a white British soldier played by Jack Greenlees joining the caliphate so he can fight Assad’s army, and is willing to give ISIS a chance in order to fight, are inspired supporting characters. As with many of the confused conversations, often with translations of Islamic words and subtitles, ISIS cherry picks the Qur’an to serve the death cult and the recruits find it harder and harder to justify their actions. There’s never a clear winner. This is place of madness and evil, with no logic.

“What you don’t think there’s slaves in the West?” Otto’s best friend (played by Ryan McKen) says, “What about zero hours? Or cleaners?” Another offers: “Better than flippin’ burgers, eh?”

Considering that many of the 35,000 Islamic fundamentalists currently living in the UK are unemployed, or have criminal records, it’s made clear that ISIS offers a purpose, and you get your own house and as many wives as you want. It’s also a place of deranged, monstrous violence, and as the drill sergeant says, “Most brothers do not last a year.”

You make an oath and your previous sins are wiped clean. The pledge scene in episode one reminded me of the glorious scene in American History X, where, shot like a music video, the Neo-Nazis beat the black guys at basketball and force them off the court. Brave and ironic, and open to misinterpretation. Ignore naysayers, this is the TV event of 2017.

—Andrew Moody is the author of SMOKING IS COOL.