Aronofsky’s mother! is a testament to his skill as a director and incompetence as a screenwriter. 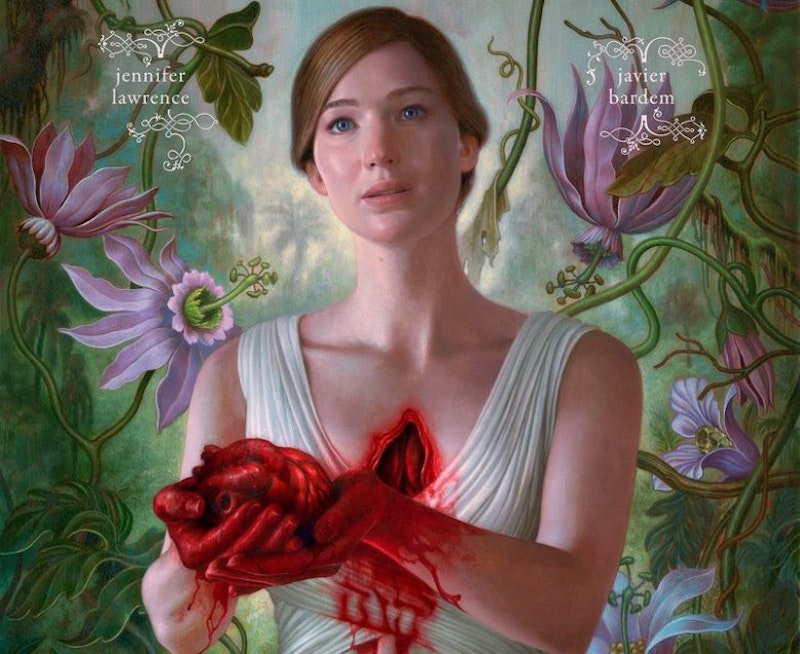 I never thought I’d side with Rex Reed, but Darren Aronofsky is an ambitious man, and he’s brought us together. Reed is one of the most bitter and hateful writers I’ve ever read—in any field—but he’s right on the money describing Aronofsky’s latest. “Nothing he’s done before to poison the ozone layer prepared me for mother!, an exercise in torture and hysteria so over the top that I didn’t know whether to scream or laugh out loud. Stealing ideas from Polanski, Fellini and Kubrick, he’s jerrybuilt an absurd Freudian nightmare that is more wet dream than bad dream, with the subtlety of a chainsaw.” Reed goes on to say that mother! is “the worst film of the century.” I wouldn’t go that far, but Aronofsky has proven that he’s one of the most pea-brained directors in the world.

Visually, sonically, and psychologically, mother! is compelling and well-executed. The lighting, atmospherics, constant close-ups of its sun-kissed star Jennifer Lawrence, immersive sound design, Gothic art direction and set design… it’s all extraordinary and meticulously plotted and arranged. We spend almost the entire movie in a labyrinthine house in the middle of the woods, occupied only by the “Mother” (Lawrence) and her husband, the “Poet” (Javier Bardem).

The film operates using dream logic and disposes of any realism early on as the dream turns sour and we sink into Lawrence’s nightmare. At the start, we learn that Lawrence and Bardem’s characters are recently married and eager to get started on their own respective projects: for Bardem, it’s breaking out of a suffocating bout of writer’s block, and for Lawrence, it’s repairing and rehabbing their house. The interiors of this movie are astonishing and horrifying: nothing’s finished, everything needs to be painted, braced, and secured, there’s dust everywhere, rooms lead to other rooms lead to other rooms lead to abyssal darkness that always threatens to pop out and engulf the place.

Lawrence is ostensibly repairing the house because it burned down before she married Bardem, and instead of starting over, she commits to rebuilding it as an act of supreme devotion and love to her husband. Enter the audience: fans of the Poet start showing up (Ed Harris, Michelle Pfeiffer), and they act as if Lawrence doesn’t exist. They ignore house rules, insult her, impose themselves, and quickly bring their own insane family psychodramas into this place of intended solitude. Things escalate: Bardem can’t refuse these guests that keep popping up out of nowhere, all of whom treat Lawrence as subhuman and proceed to trash the house she’s spent so much time fixing. Aronofsky nails the feeling you get in dreams when, try as you might, it becomes impossible to communicate with or be understood by others—you try to speak and scream, and find your throat choked by an invisible force. Eventually hundreds of people descend upon the house, searching for Bardem and his work and scavenging like animals for any scraps and souvenirs they can find.

mother! is a thrilling movie to experience, but its thematic focus is so arrogant and banal that it’s rendered useless, a testament to Aronofsky’s considerable abilities as a technical director and his ineptitude in writing his own scripts. The allegory of mother! is how hard it is to be an artist, and how hard it is to be an artist’s muse. Early in the film, we see a large crystal on display in Bardem’s office, a sacred totem and the only object that survived his house fire. Harris and Pfeiffer’s characters wander up there in spite of Lawrence’s insistence, and of course they break it. Bardem loses his mind and boards up the room, grabbing pieces of the shattered crystals and squeezing them deep into his hand until the floor runs red.

More and more people descend on the house, and for the majority of mother!’s two hours, we follow Lawrence in close-up as she tries in vain to contain the chaos around her. At one point, when the place looks like a frat party, some guy walks up and starts hitting on her. She refuses, he persists, but eventually gives up and deadpans “Forget it. You’re an arrogant cunt.” Soon after, we see a mob throw Lawrence to the ground and pummel her, yelling “FILTHY WHORE!” and “DISGUSTING CUNT!” as they rip her top off and rearrange her face.

Besides being intellectually daft and aggressively simple-minded, mother! resorts to shock tactics that are undeserved and gratuitous. Frank depictions of rape and violence against women aren’t inherently misogynistic, but here, they’re in the service of… what exactly? Aronofsky is asking the audience to sympathize with him and for permission to atone for his sins, all the people he’s hurt and discarded in the service of his art. Oh, please!

mother! is a nonstop onslaught of physical and psychological abuse most reminiscent of Justine by the Marquis de Sade, who at least was honest about his sadistic interests. Aronofsky peppers in some religious iconography to gussy up an otherwise daft allegory and distract from the boring and offensive misogyny of his primary conceit. At the end, Lawrence lights the house on fire and we see Bardem carrying her charred body upstairs, so that he can extract another crystal from his latest, used-up muse. In case you weren’t picking up on the neon-light symbolism of this movie, Aronofsky spells it out for you plainly in the last 10 minutes: Bardem is “starting over,” and after he pulls out a crystal from Lawrence’s charcoal abdomen, we return to the beginning, where an ersatz Lawrence wakes up to endure another year of torture.

No more movies about the creative process, or how hard it is to be an artist, or even more arrogantly, how hard it is to be an artist’s muse. No more cocksure directors building beautiful castles in the sand just to trap and impose upon the viewer how horribly smart and tormented they are. No more movies where the lead actress is dating the director (even Gerwig and Baumbach haven’t made anything this awful). mother! may not be the worst film of the century, or even the year, but it’s certainly more grist for the mill for people who rightfully complain about the lack of female directors and stories in Hollywood. Aronofsky needs to lay low and scan spec scripts for a while and direct someone else’s vision, because while he’s not a charlatan, he’s just unbelievably dumb.