Andy Muschietti’s It adaptation glosses over the scariest part of the book: the town. 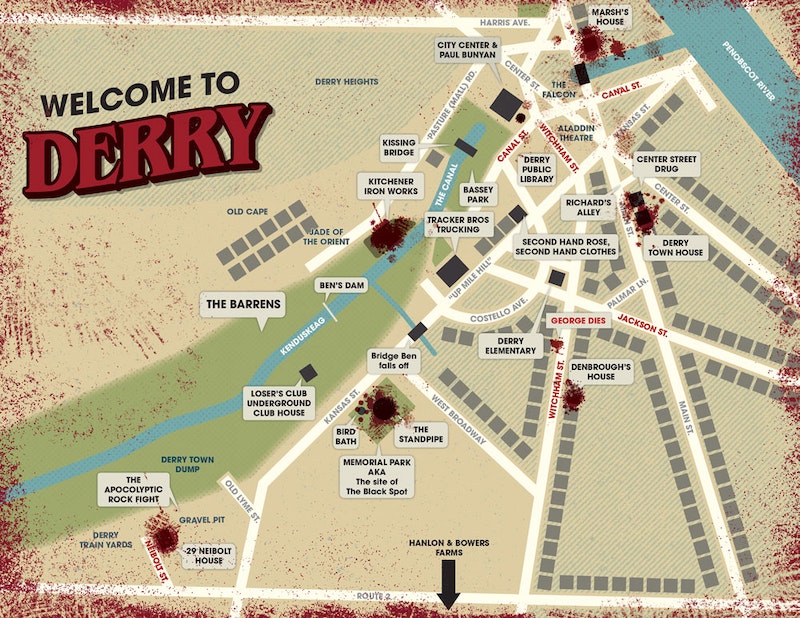 There’s no way to adapt an 1,100-page novel into a two-hour movie. Forget a sequel—they should’ve had Chapter Two ready to go in six months. Fans will have to wait two years for the second half of It, a new adaptation of one of Stephen King’s thickest books. The structure and length of It are more suited to a miniseries or a quick succession of films, but unfortunately, a miniseries was already done in 1990, when network television content restrictions demanded that the most disturbing elements of King’s novel be sanded down or excised completely. This should be a Netflix or HBO series, because to split the story up into childhood and adult sections ruins the rhythm and pacing of the book, and as a result, the film feels rushed and shallow, despite being a “great audience movie,” as Matt Zoller Seitz wrote the other night.

I had a similar experience: a packed theater that skewed young, everyone engaged and murmuring and reacting. No phones. It was great—but the novel is so much more than its set pieces and jump scares. Muschietti’s take on the material is excellent, and he nails so many gripping scenes from the book: Henry carving an “H” into Ben’s belly, the fetid sewers where dead children “float” beneath Derry, Beverly covered in blood that her father can’t see, the gray cruelty of the townspeople against the light of the Losers’ Club. But the scope of a feature film is too narrow to show what makes Derry so terrifying: the audience needs to ease up, sink in, take digressions and interludes about the town’s history, its history with It, the relationship between the children and the adults. If only they knew this film would make $117.2 million dollars in its opening weekend.

In a review for The Forward, Noah Berlatsky wrote, “An evil clown dismembering children is one thing. Real-world hatred, though, is not what people want when they put down that money for a horror film.” Berlatsky’s piece concerns Stanley Uris, the only Jewish kid in the Losers’ Club, whose religion makes him as much of an outsider in King’s novel as Bill’s stuttering, Ben’s weight, Eddie’s asthma, Beverly’s gender, and Mike’s race do to psychotic bullies like Henry Bowers. The film glosses over Stanley’s backstory and upbringing just as much as it glosses over the others, but more importantly, Muschietti’s adaptation sidelines the locus of evil in King’s novel: the town of Derry, Maine itself. “It,” the elusive and mutable force that reemerges in Derry every 27 years for fresh fear and young meat, is most frequently embodied by Pennywise the Dancing Clown, played here by Bill Skarsgård. But Muschietti wisely stuck close to King’s vision of It as an omnipresent, shape-shifting energy that takes the form of whatever its current victim is most afraid of: for Beverly, it’s blood spewing out of her bathroom sink as she anxiously avoids telling her abusive father that she’s started menstruating; for Bill, it’s the phantom of his dead brother Georgie still missing an arm and begging to be taken home out of the sewer. It is vanquished—for the time being, at least—when Bill bravely steps up to the Georgie imposters and shoots him in the head with a cattle-gun. It feeds on fear, and once the kids of the Losers’ Club confront their fear and face it, Pennywise deflates and falls away, scattered in the abyss until the kids must finish him off when they reach adulthood.

Muschietti did the best he could with the constraints of a feature film, and we’re lucky they got an R-rating—It could never work toned down, without graphic violence, swearing, and frequent intimations of physical and sexual abuse by parents. We don’t see enough of the adults in Derry, but those that we spend the most time with are properly disgusting—Beverly’s creepy father Alvin, played by Stephen Bogaert (a dead ringer for the late Scott Weiland); Eddie’s rotund and repulsive mother (Mollie Jane Atkinson), a sociopath who lies to her son and convinces him he has asthma; and Mr. Keene (Joe Bostick), the pharmacist in on the asthma scam and overly flirtatious with a barely pubescent Beverly. Assuming this cast of kids only returns for flashbacks in the sequel, the rest of It could be wildly different from Chapter One: slower, more reflection, decay, not as many clowns jumping out of dressers and sinks. But this one was fine for now, they understand and respect the material and are doing the best they can under the circumstances. Wow though, 45 minutes for the gangbang scene at the end? Damn. You don’t have to be that faithful to the source material.