The Almost-Old Internet of 2003 was all garbage, just as our current Internet is. 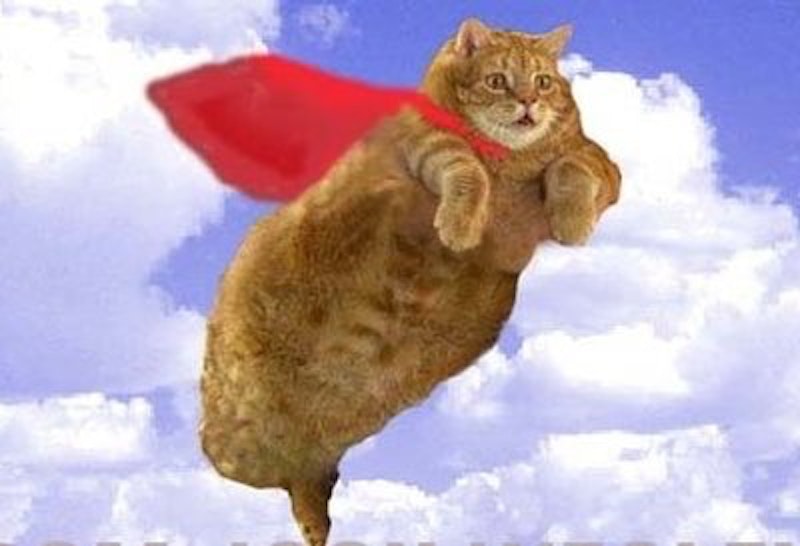 Now once upon a time, not too long ago, there was the Tubcat. The Tubcat, a real fat cat that became an even realer meme due to its bizarre tribute website, first appeared during the era of the Almost-Old Internet (the Really Auld Internet, a friend on Twitter explained recently, consisted of how-to guides for using CD-ROMs, bulletin boards for arguing about fanfiction, and a budding market for arbitrage in Beanie Baby securities).

I encountered the Tubcat site in 2003 and became obsessed with it. The Almost-Old Internet of 2003 was all garbage, just as our current Internet is, but it was poorly curated garbage, a social media-free rubbish heap of pages among which one could occasionally find rare gemstones. I stumbled upon and thereafter treasured my little pockets of life and hope: Mark Prindle’s record reviews, Homestar Runner, the Thorax Corporation, mIRC chat wars, Soulseek, and my friends’ half-hearted efforts to relaunch e-wrestling as a pretend sport. Tubcat entered the mix and quickly became my everything, though I have no idea why.

In 2003, I was lonely, living in my dad’s basement, either underemployed or funemployed, and always grasping at straws. This Almost-Old Internet, which was new to me back then, became a place of refuge. Most people still didn’t go there; most writing that appeared there remained separate from real discourse. Today the Internet is a first home for most Gen-Z’ers and their younger siblings; for me it was as well, but 15 years ago, you had a choice. You could live on the frontier, a Never Never Land of snarky masterminds you’d probably never meet, or you could live among the grown-ups, the people who seemed to know better, yet were dead inside.

So what did the Tubcat do for me? Well, I spent hours poring over the site, which existed to commemorate an actual fat cat but wasn’t maintained by the cat’s owner, because there was something to it that transcended mere language. The Tubcat site captured an aesthetic, the Almost-Old Internet aesthetic, that wasn’t quite like anything else: it was trash and it was humor, but it wasn’t necessarily laugh-out-loud funny or vicious. “i too wish for TUBCAT a lng and happy life!!! pls don't say i am cruel i just love this fat pussy k\ittie!!! okay?! no more hate male!” wrote the author of the site, in a style that foreshadows later work by social media meme manufacturers such as @dril and @dasharez0ne. These were words that made sense only in the context of an ad hoc world in which people communicated with each other through a developing medium every bit as clumsy and gross as we were.

The fatness of the Tubcat, which would be a bad thing in real life, worked perfectly on the web. The Internet was made for “fat pusses”; they were plush, pillow-bodied creatures with expressionless faces every bit as vacant as the vast, empty realm for which they served as de facto mascots. Tubcat, of whom little was actually known, paved the way for the emergence of subsequent tubcats such as Meow the Obese Cat, Sponge Bob the Obese Cat, and Skinny the Obese Cat. These cats were big news—Meow even found his way onto Anderson Cooper’s narrow lap—and in my early days as a blogger, back when people blogged, I duly chronicled their comings and goings.

I’m a historian by profession, and perhaps that’s why I can’t shake the feeling that I’ve lived my life entirely in retrospect. The Tubcat is gone from our active imaginations now, the way everything else that isn’t the crisis du jour seems to be (Szechuan sauce serving as the latest pitched battle in an ongoing culture war against something other). The site’s disappearance from view, then, is as much a fait accompli as the rest of it. I’m 34 and writing about the legacy of the Tubcat, but I might as well be 20 and whiling away my lonely hours staring at the pink background of the Tubcat site. The past is both an alien world and an old shoe; but how can it be both? I wrote essays in 2003, which were just “blogs” to the grown-ups who thought me full of hot air, and I’m writing this essay today, yet perhaps it’s no different. Then, as now, I was reckoning with the truth of the 21st century using rhetorical skills better suited to the 17th.

“Childhood is the kingdom where nobody dies,” wrote Edna St. Vincent Millay. “Nobody that matters, that is.” So the Tubcat website lives on, an undying and unchanging relic of my childhood, maintained by no one in particular for not very good reasons at all. The passage of time from 2003 to 2017 occurred in eyeblink yet took an eternity. There was more to life than Tubcat, but that life—of ballfields and running tracks and powerlifting gyms—happened offline, somewhere else, to a person a who looked much like me but wasn’t.  Meanwhile, the ghost of Oliver Bateman remains tangled amid the gossamer zeroes and ones of the world wide web, lost in space and meaning.