A Tapestry of Color and Motion

Cuphead is a solid platformer and a visual feast. 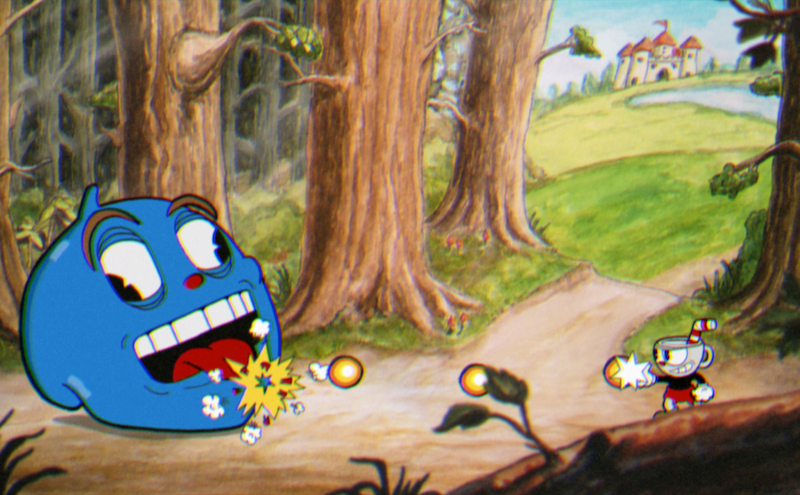 If you managed to bring old Fleischer Studios animators into the present day and introduce them to making video games, they would probably make Cuphead. The recently released run and gun platformer is mechanically similar to games like Mega Man or Contra, but possesses an aesthetic based on classic rubber hose animation. The jazz soundtrack meshes perfectly with the visuals, creating an astoundingly faithful recreation of the animated films that inspired it. This is underpinned by solid platforming mechanics and controls, but it is now known for its challenging gameplay.

The game focuses on boss battles, which are by far the strongest parts of its level design. Every boss has a unique personality, shown through their movement and character design. The sidescrolling platforming levels don't quite live up to this, feeling like they were placed with the sole purpose of giving players a way to get coins for upgrades. The mausoleum levels feel similarly utilitarian, serving as a way for the player to master the game's parry slap move. Though perhaps these levels even out the game and show the same level of visual flair of their boss battles, one wonders if they were included more out of perceived obligation.

Cuphead's animations are a masterclass in fluid motion and surrealist imagery. Watching the way that the bosses move is an absolute joy. Even small details such as cannons bending upon firing in a cartoony manner enriched the experience. Part of the anticipation in the game is getting to that next boss and seeing just what they're going to do in battle. All of this is put against watercolor backgrounds that feel truly authentic.

However, the game is also notoriously difficult. Some of this can be attributed to deliberate choices, such as the lack of checkpoints in the (thankfully short) platforming levels, the lack of health regaining power ups, and the volume of objects on screen that the player needs to keep track of. At times, it's that one stray projectile that can end a boss battle and it doesn't always feel fair. I found that sometimes I would win a boss fight simply by being in the right area of the screen at the right time. This also means that some people who want to enjoy the beautiful animations may end up watching playthroughs on YouTube instead of purchasing the game themselves.

That being said, I enjoyed my time spent with Cuphead. I feel like the 2D animated style is something we need to see more of in the future. For quite some time, I've wanted to see more 2D animation and games like Cuphead and Night in the Woods are showing audiences that there is still so much that can be done with this style.