Don't Be a Label Whore!

Target by any other name is still plain-old crappy Target. Don't be fooled by the name on the tag. 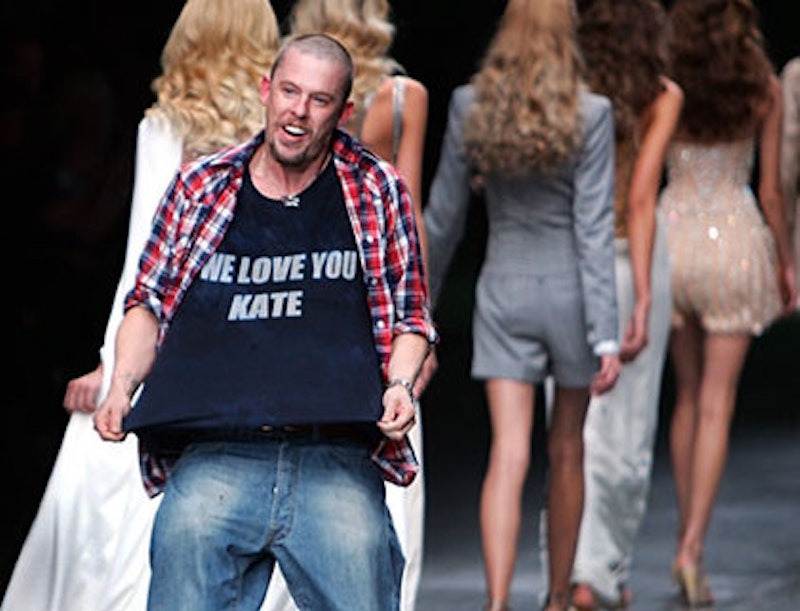 This, we kid you not, is Alexander McQueen. Do yourself a favor and go to design school.

I’m fiercely strutting into the Alexander McQueen boutique in the Meatpacking District in New York, my face completely cloaked in a pair of gigantic sunglasses, my “I’m really fierce. Don’t fuck with me,” Victoria Beckham pout fully on. After I press the button to enter the futuristic couture-zone, I go inside and realize that I’m out-Diva’d by none other than Austin Scarlett of Project Runway fame. All hail to the Queen. But because I’m already a celebrity in my own head, when I see her I don’t really say anything or act intimidated or whatever and I just keep cool.

As I peek around, I salivate over the kooky, beautifully made couture women’s dresses and coats. It’s like I’m directly inside Carrie Bradshaw’s vagina. And despite the fact that I am a boy, my inner Beyonce desperately wants to try on one of these $15,000 dresses. Not to like be a girl or anything—I do like my cock—but because the dresses are so glam. I don’t know if there’s anything in the store, for men or women, under $1000.   And $15,000 for a dress? Really-really? Who can afford that? Wouldn’t it be totally fierce if people could actually, you know, afford to buy some of McQueen’s art?

The following news is so good it might make women everywhere release a small stream of pee in their panties. According to WWD, Alexander McQueen is currently talking with Target to design a limited edition, one-off collection. Wow. Just WOW! McQueen has always been one of my favorite women’s wear designers. He’s avant-garde and unapologetically in your face. He’s so the Damien Hirst of the fashion world. Think of it this way: if you sit in the front row at a McQueen show you may get flogged, you know, as part of the experience.

The really interesting thing to me, though, is that Target is not H&M. When you think about hot, affordable fashion, you tend to think of places like Zara, UNIQLO (if you’re in New York) or Club Monaco on a really good day. But Target? Hmmm. Throughout its re-fiercerizing, Tarrrzzzhay has obviously tried to appeal to a fashion forward bunch, even though the superbox has always been the savvy one of the pack.

Because, you know, Target is basically Wal-Mart with some really bitchin’ make-up and a good weave, okaaaaay!

So by adding Alexander McQueen, who has been touted three times as the British “Designer of the Year,” to its roster of prestigious one-offs, the superbox is clearly making a statement about a specific approach to modern living: Luxury, however watered down it is, is the only religion to live by.

Hal Foster, one of my favorite cultural critics, once said in a little black book called Design and Crime that we are living in an age of “total design,” and I think he’s spot on.  Nowadays, everything from your water to your condoms to your reality shows is packaged around some kind of design aesthetic. Try and think of something, anything, that isn’t designed. You can’t.

But I would also like to throw in that we are living in an age of “total luxury.” Just think of art works by people like Hirst, Jeff Koons or Josephine Meckseper that are themed around luxury and money. Or what about the number of home improvement and modeling reality shows? And speaking of TV, so few shows even have a real storyline or plot, let alone a plot that doesn’t relate in some way to fashion/luxury/glamour. What Target knows, along with places like Apple, Ralph Lauren and Abercrombie and Fitch, is that you have to build a lifestyle around your brand. You have to promise your customers something outside of the product, and that promise is becoming more and more a promise of luxury, or at least the “pretense” of it.

This, I think, is the wider implication of these posh designer + superbox collabs. Don’t get me wrong: if ever Raf Simons or, OMFG, Hedi Slimane, designed a collection for H&M or Target I would seriously camp outside the store and fight each intervening queen for all the extra-smalls.

What worries me, though, is that these pairings totally brainwash people into thinking that the name means more than the quality of the piece. My cheap $9 H&M v-necks are totally major for like a month, and then they’re so stretched out that I have to keep re-buying them. The reason a McQueen or a Dior costs thousands of dollars is because they are well made, and you will own them forever. What Target is saying is, You may not be able to afford a real Alexander McQueen, but for $39.99 or whatever it is you can have a “real” garment with McQueen’s name on it. Because that’s all that really matters anyway—whether or not his name is on it.

Of course, the real winner in this potential collaboration is Target. Right? I mean yeah, McQueen will collect $900,000,000,000,000 just for jizzing out a collection. But Target collects the cache and the prestige for housing the one-off, and I doubt Target customers will suddenly become exclusive McQueen queens. It’s ostensibly about making luxury accessible to all when it’s actually a sly trick to get people loyal to the superbox. And once again, Target will completely obliterate the other yawnful superboxes. Well, work! I just don’t want us to be too luxury hungry. I don’t want us to passively allow the suits to pull the wool over our eyes. Because a cheap but fancily packaged outfit is still a cheap piece of shit.