The Wal-Mart of Fine Dining 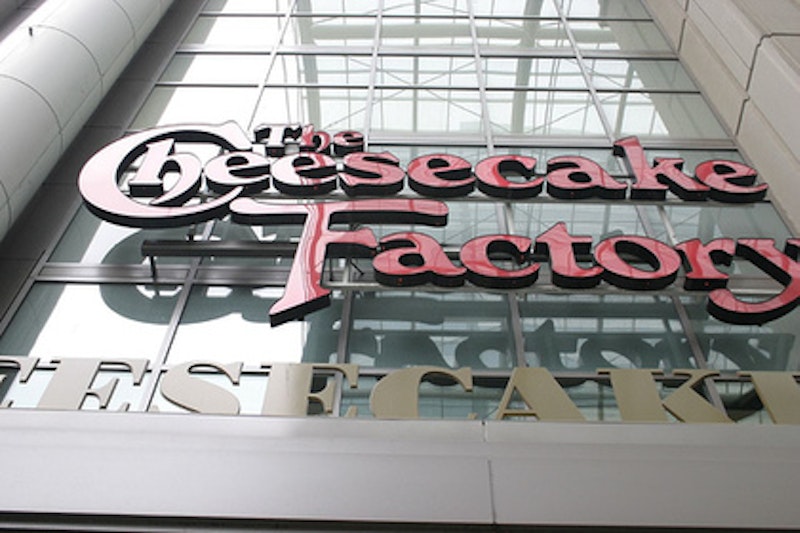 Photo by ishane, the Flickr page caption for which happens to be exemplary of this article's point.

This recession knows no mercy; my family’s local Bennigan’s has been torn down and replaced by high-rise condos. It was the Bennigan’s of my childhood, the place where I celebrated five birthdays, though it feels like I spent every one there. Fried cheese and brownie bottom pies filled my heart with joy and sent my cholesterol through the roof. For years the chain stood as a monument to dependable, unpretentious American middle-class dining. Now, Bennigan’s is more or less dead.

While my favorite childhood restaurant kicks around in a somewhat-difficult-to-watch death rattle, those fuckers over at The Cheesecake Factory are celebrating their 30th anniversary. I am going to write this in capital letters so you understand I am not screwing around: THE CHEESECAKE FACTORY SUCKS.

I used to be like you. I used to nod my head in hypnotized agreement every time some otherwise sane person would say things like, “You know, The Cheesecake Factory is really good” or “I hate most of that chain restaurant shit, but, man, Cheesecake is kind of bomb.” Any time “Cheesecake” was a potential dinner option, I always wholeheartedly agreed.

The “Cheesecake” in my town is right next to a movie theater. The next closest one is also right next to a movie theater. The closest one after that is right next to the aquarium. Anecdotal evidence from friends around the country has led me to believe this is a trend. There needs to be a distraction nearby that can occupy upwards of three hours, since that’s more or less the average waiting time to get a table at the restaurant. Three hours. I have seen it with my own eyes on several occasions. We’re not talking about Dorsia here; we’re talking about “Cheesecake.”

A standard Factory experience proceeds something like this: First, you have to choose at least two nearby restaurant backup plans because your first backup is usually filled up with the first batch of rejects from The Factory. Picking one restaurant is often difficult enough, but three is usually impossible.

Once contingency plans are worked out, you have to sit through that dreadful car trip. The anxiety in the cabin is palpable, as you wait for a moment of truth and finally see that line stretching out the front door and down the block. The driver flies through shortcuts and back roads hoping to catch that one nearby parking spot that could be the difference between dinner at The Factory and the walk of shame to the Pizzeria Uno, followed by the even worse indignity of resorting to the mall food court after seeing the line at Uno’s.

Even if you do get in quickly, I just don’t see the appeal. The menu is more intimidating than stepping on someone’s new sneaker and realizing you just crossed Kimbo Slice. Seriously, check out the menu. God, just look at that insane variation: pizza, steaks, omelettes, seafood, desserts, cheesecakes (a separate category), sandwiches. Within each category you find every culinary tradition represented: Japanese-influenced Ahi Tuna, Mexican fish tacos, and Cajun jambalaya. I am so freaked out by the menu that I order the same thing every time: the grilled cheese. There are too many options that don’t make any sense, and it just plain boggles me. A seafood restaurant specializes in seafood, so you know you’re getting the real thing. The Factory, on the other hand, has no culinary identity.

Let’s pause here for a moment. Who cares, right? But here’s the thing: The Factory may not have a food-based identity, but it does have an identity. The Cheesecake Factory has sold itself as a pseudo-exclusive fine dining restaurant for the middle class. It is high culture for the middle and lower class and acceptable kitsch for the upper class. It isn’t $40-an-entrée kind of place, but it is a bit expensive.

Their reputation is based on having three-hour waits and that is it. This isn’t a wolf parading around in sheep’s clothing—it’s a wolf parading around in lion’s clothing. The Factory is essentially an everything-under-one-roof-beat-out-mom-and-pop-store Wal-Mart for people who often look down on Wal-Mart. It offers bogus exclusivity: if you wait long enough or time your visit just right, you’ll get in and prove you’re smarter than everyone else.

What troubles me about The Factory isn’t its ability to occupy multiple spaces on the social strata—it’s the particularly manipulative way they’ve done it. It’s not a 10-table boutique restaurant in Soho, it’s a massive countrywide chain that presents faux-exclusivity and plays on people’s anxieties and stereotypes about acceptance, class, and being cool. Half of the people in the restaurant, those that are maybe a bit nervous that they’d never fit in at the local chic upscale steakhouse, get to pretend they’re getting that fancy vibe while the other half of the restaurant is quietly mocking them from the privacy of their mammoth booths. The Cheesecake Factory dining experience has become a subtle exercise in class/dining relations and appearing either cultured or uncultured depending on what you’d rather be. It forces you to choose which “side” of society you embody with the way you react to your dining choice.

If you’ve ever seen a Travel Channel show, you’ve probably heard the mantra that food explains a lot about a country’s culture, and I agree. You’ve also probably heard Anthony Bourdain bitch about the American chain culture and general dining habits. I love Bourdain, but screw that. Bennigan’s is what is, knows what it is, and I love it. I’ve had meals at Bennigan’s infinitely more pleasurable than fine dining, in America or abroad.

The Cheesecake Factory, though, is what’s wrong. It belies some of our lesser qualities and our food culture criticisms—we’re complacently willing to experience the inauthentic rather than leave our comfort zone. This same place also plays up some of the country’s social divisions. So next time you’re thinking about a trip to The Factory, hold up for one second. Maybe try that new family-owned Mexican place up the street. Or dress up a little and check out that classy Italian joint because the cheesecake will be better there anyway.