Some tips from a former employee on how Starbucks can stop the bleeding. 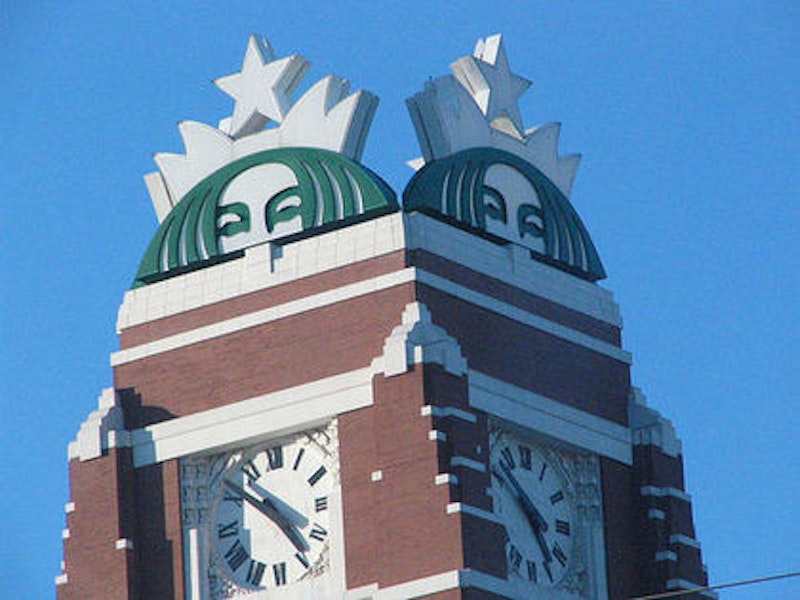 I started working at Starbucks after leaving another corporate franchise that was far deeper in the throes of economic difficulty than Starbucks is now. Proex, a film developing lab with its own moderately-priced portrait studio, was having trouble competing with Target and Wal-Mart and their brand of simple shots of naked babies and one-hour, smudgy and blurry film processing. (Not to mention digital cameras, which rendered everyday film use somewhat obsolete.)

I knew Proex was doing poorly when it introduced a $17 dollar member card that made their rates a bit closer to the Target across the street, and when they subsequently sent me to a class to be brainwashed into believing that the Frequent Photo Card was a great deal. Our first exercise was to stand in a line and say our favorite thing about Frequent Photo Cards. I said that I loved the pretty graphics. The card was brown with predictable strips of film on the sides, and I had grown to hate looking at them for hours a day at work, taped all over the inside of our cashier island.

Proex had a simple strategy of dealing with the loss of sales, which I assumed was cooked up somewhere in the vicinity of David Ritz (yes, of Ritz camera; he had bought out many photo companies, including Wolff Camera). That strategy was not to lower prices, but instead to penalize employees for being “less than aggressive sellers.” I assume because people love to get their expensive photos with a side of a pushy salesperson. It felt good to quit.

I was trained at Starbucks during my first week of college. Their manual had an equal amount of regulated jargon cooked up by corporate thinktankers who I would eventually imagine sitting around all day eating party-size subs, discussing more ways to control their employees while iceberg lettuce fell out of their mouths.  The manual occasionally referenced another—unseen—training manual called “The Green Apron Book,” which gave fairly generic quotes about the harmony of good customer service. I felt like I was entering into some Shaolin school and “The Green Apron Book” was the secret style of kung-fu you learned after proving you could slice watermelons with your hands.

At first, working at Starbucks was cool. My manager was a mellow guy named Ed who played Paul Simon tracks all day and wasn’t on the fast track to worshipping “The Green Apron Book.” I preferred mixing steamed milk with peppermint syrup to combining the rancid chemicals that go into photo developing, and it was nice to work with people my age, to get the occasional free scone, and to knock back espresso shots to get through early shifts. I also didn’t mind being able to give customers what they wanted, instead of always feeling forced to sell them something they didn’t want.

But Ed got a job managing at Dunn Brothers, and a new manager was sent in. I won’t say her name, but she was bubbly and sweet—so bubbly and sweet that there was a hint of cultishness about her, like she had spent her teenage years hanging out with her church’s youth group and had been oblivious to the fact that most kids were experimenting with pot and skanky shades of eye shadow.

She followed “The Green Apron Book” and other corporate mandates with the same ferocity with which I imagined she interpreted the Gospel. Turns out the manual presented employees with an exact formula for greeting customers. It was something like, “Hello! How are you today?” At that point, the kids in the line of about 25 college students would give us a blank stare, or shout their drink order back at us. If they answered with how they were, we had to ask them what they wanted, and instead of writing it down ourselves, we had to shout the order back to the ultra-busy baristas, who scrambled to use a broken charcoal pencil to write it on a cup. The process was slow and clunky, and the wrong greeter took customers off guard and made them feel awkward.

That kind of reliably consistent service is more the territory of McDonald’s and its fast food competitors than of cafés. Years ago, cafés were stereotyped as off-kilter havens that attracted unique thinkers and artsy types. Most of Hemingway’s stories involve sipping whisky at café tables; Van Gogh probably came up with ideas while sitting at a café, drinking too much absinthe. On my college campus, the hippest cafés are rife with rude service, murky coffee, and graffiti-filled walls. Don’t get me wrong—the fact that the owner of our local Espresso 22 tells me that I endorse slavery every time I attempt to use a credit card for a purchase under $5 has made me head to the neighboring Starbucks a few times. But for every lazy consumer like me, there are probably five devoted indie/environmentalist/vegetarian kids who swear their loyalty Espresso 22 and its thrown-together mix of garage sale chairs and authentic Italian-style drinks.

The expected closings of almost 1000 Starbucks outlets got me thinking about what a café actually is. It’s not a restaurant, and it’s not a coffee house or a bar. In France, Italy and the Netherlands, cafés sell alcohol. In most other places, they don’t, although historically they have. Starbucks markets itself as a “third place;” not home or work, but somewhere to escape from both. Not a bad concept, so what’s going wrong?

In my opinion, Starbucks made three mistakes that are fairly simple to point out:

1) Starbucks’ main competitors (other than Caribou) are local cafés. Local cafés tend to gain a reputation by appealing to trendsetters (the “unique thinkers” I mentioned above). One of the most popular cafés by my house is called “Hard Times Café” and it is full of kids reading used copies of Sartre books and pretending not to be annoyed by overly loud music picked by baristas who hang out at record stores. Starbucks realizes that this type of place is its competitor, and tries to create its own reflection of “trendsetting culture,” or, if I can say this word again, “hipness.” Note their introduction of a small compact disc rack that usually sells compilations of music that vaguely and stereotypically represent foreign cultures. The problem is that once something becomes corporate territory and mass-produced, it no longer qualifies as “hip.”

2) Bart Simpson once went to the mall (I believe to get his ear pierced), and he found that he had to act quickly because every store was rapidly being turned into a Starbucks. The Starbucks I worked at was in our student center, but if a person walked outside of the building and one block down the road, they’d find another. It’s not hard to figure out that a saturation point has been reached.

3) Starbucks accidentally became a symbol of the somewhat nauseating degree of economic prosperity that America has enjoyed. When I was an economically struggling college freshman, I was constantly aghast at the amount of people who returned every morning to buy lattes that cost more than $4. That kind of spending wasn’t particularly notable until McDonald’s introduced their McCafé, which created a foil for the ridiculously expensive price of coffee by serving quality products at a “layman’s” price. The fact that they stole customers proved that people were willing to give up the “third place” concept to save an extra dollar or so. You know the U.S. is entering a recession when we don’t have an extra buck a day for a “third place.”

So Starbucks has suddenly become a glaringly unhip enterprise that only affluent Americans can afford. Sandy Banks from The Los Angeles Times pointed out that most of the Starbucks that are closing are in poor neighborhoods and argues that, “The losers are those loyal customers who considered it a privilege to join the cultural mainstream, sipping overpriced Frappuccinos,” and that a Starbucks in a poor neighborhood represents “a public stamp of approval” and a “symbol of hope.” Without too much making fun of Ms. Banks (who also pointed out that she lives in a five-Starbucks neighborhood), let’s just say the gentrification will have to wait for those communities.

If Starbucks intends to reverse its downward trend, the company should take note of Ms. Banks’ statements, and move away from that type of thinking. Café culture isn’t about inviting people to join the “cultural mainstream.” That’s fast food territory. Instead they should take note of the success of Pabst Blue Ribbon beer. Pabst has been a big failure since the 1980s, closing down factories and receiving bad reviews regarding its flavor. But its distastefulness made it ripe to be adopted by a counter-culture located in Oregon, and for its underground popularity to spread. But Pabst never marketed its newfound “hipness;” instead it didn’t bother advertising much at all, and left itself culturally-ignored enough to remain a cult-phenomenon.

Not that Starbucks should quit advertising and shut down, but they could at least start by letting employees wear whatever shoes they want. Loosen the corporate strings, and instead of blindly following what might be “hip,” think retro. Think Hemingway and his whisky. Starbucks appropriated Italy’s style of serving espresso, so why not revolutionize some other tradition of drinking? Give those PBR kids some old fashioned absinthe, serve sake hot with a wet towel, and if they’re very ambitious, look to the Netherlands for guidance.