A generation raised on fear-mongering PSAs still buys cigarettes gladly, perhaps because so many of our habits lend themselves to smoking. 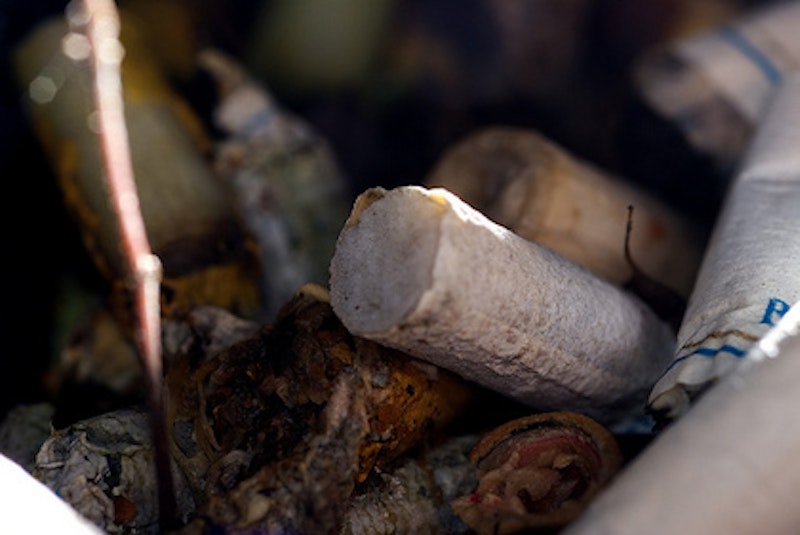 Despite growing up with commercials featuring cartoon animals hovering over tables of carcinogens while theater kids sing songs about evil tobacco execs, our generation still smokes. My boyfriend lives in a house of eight boys and their driveway is full of enough cigarette butts to necessitate occasional raking. Probably about a fourth of my colleagues at the college paper step out for smoke breaks, and I’ve witnessed a good portion of the rest take a smoke after a few drinks. I’m an occasional smoker; I keep a pack in my purse and usually smoke about three or four cigarettes a day, although if it’s less than forty degrees outside (which in Minnesota is about half the year) or if I’m sick (i.e. hungover) I don’t bother.

I tend to like menthol cigarettes. As a slightly mustachioed lady from the gas station across my street says, “Once you go menthol, you never go back. You can feel every drag. It’s like smoking in colors.” But much to my slightly naïve smoking awareness, menthols indicate several things about one’s personality that I never could have anticipated. Several people have told me that menthols are traditionally “black people cigarettes,” and one person informed me that I shouldn’t smoke menthols because they reminded him of his grandma. I’ve also grown to have an affinity for Parliaments, because I like the feel of the filter. The slight emptiness at the end reminds me of how chopsticks feel compared to forks. Little did I know that Parliaments were also traditionally “black people cigarettes,” and their hollow filters are supposed to be for snorting cocaine.

It doesn’t stop there. American Spirit smokers are typically thought to be yuppie hipsters (due to the lack of added ingredients), while Camels and Marlboros are for the most part acceptable for anyone. I’m no expert though; these are all things I’ve picked up from smoking chitchat. I could have figured out myself that Camel No. 9’s, with their neon trim and sleek black boxes, are marketed towards women, but finding out that something as generically packaged as Parliaments had also burrowed themselves into a demographic made me feel as if I’d lost that innate sensitivity to advertising semiotics.

Recently, a product came out called a “Camel Crush.” It is a cigarette that has a small bead (think those rank peppermint breath beads) in the filter, that turns the cigarette into a menthol. The Camel Crush is the ultimate hybrid, plus, in it’s own way, it seems kind of technological. The smokers at my boyfriend’s house went on a chain-smoking binge after they came out.

After years of watching kids trade one type of cigarette for another and make excursions to far away gas stations for hard-to-find unfiltered Lucky Strikes, I’ve concluded that smoking’s appeal has a lot to do with my generation’s love for jumping into a world of competitive brands.

Smoking is no longer just a matter of rolling tobacco in paper; there are a plethora of choices and a league of marketers that hone the differences between cancer sticks until they become a way to learn what kind of person that guy outside your dorm who lends you a smoke might be. Or at least an excuse to ask them about themselves.

Just that sentence can open a dialogue into a whole world of smoking preferences, and two Djarum smokers will feel some kind of almost meaningless but still pleasant bond at having that brand preference in common. We grow up making friends that way.

“You used to watch Rocco’s Modern Life every day, too?”

Plug in any variable, and simple product choices become the sod in the dirty garden of friendship. I’m not particularly ashamed of bonding with people over such capitalism-conditioned criteria. Who knows, maybe a preference for “smoking in colors” correlates with other personality traits.

The bond between smokers has been heightened, too, by recent legislation banning smoking in indoor public places. Sure there might be some old timers who sit and smoke over their keyboards or hold a Camel in one hand while eating their Cracklin’ Oat Bran with the other, but they’re from a different time. We college kids don’t own our properties. If we smoke more than 5% of our cigarettes in our bedrooms, we might not get our $500 dollar security deposit back.

These conditions might make us smoke less, but when the weather’s nice, there’s nothing wrong with stepping outside for a smoke. In fact, the necessity for fresh air has made smoking less stuffy, more relaxing even, as long as the wind chill stays down.

There are even several somewhat archetypal outdoor smoking scenarios:

The Solitary Smoke. Yes, we wear iPods all the time, and a smoke during a long walk around the city makes the music even better.

The Bitching Smoke. You and your cigarette-smoking crew can leave any annoying circumstance and bitch about it together. Get yelled at for screwing up the espresso machine at work? Nothing like fresh air, tobacco and bitching away from your boss to calm your nerves.

The Drunken Smoke. Alcohol renders almost anyone’s lungs capable of chain smoking, and almost anyone’s lips incapable of censoring themselves. A drunken smoke becomes a great way to bond with strangers, if you can remember it the next time you see each other.

The Ice Breaker Smoke. We’re used to talking on the Internet. A smoke can take away some of the awkwardness of a one-on-one encounter.

For all these reasons, smoking perseveres. Even after childhoods filled with damning Truth ads and anti-smoking campaigns, my demographic of urban college kids still funds the tobacco industry, if not as heavily as previous generations. And as long as we thrive on brand competition and need easy ice breakers to overcome our fear of face-to-face conversation, we still will.