Tales from the Art World 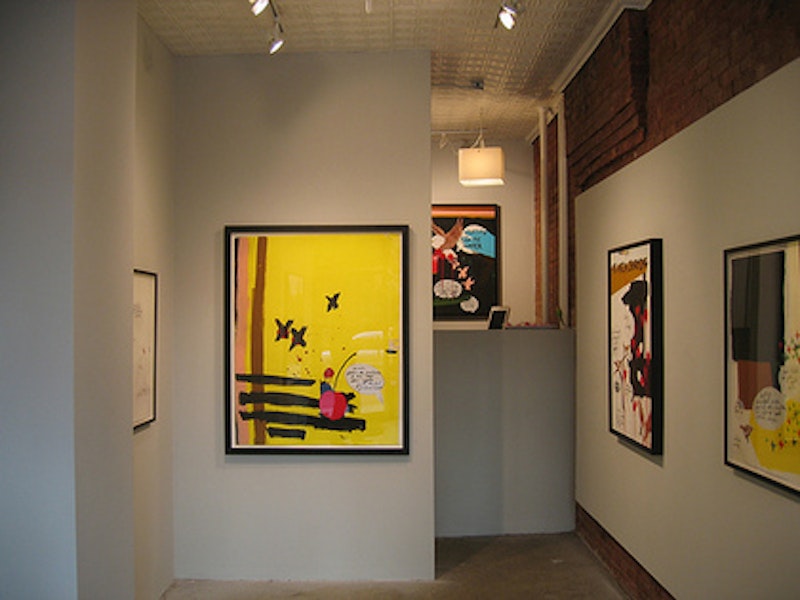 Today is my first day as a Boy Bitch at Deitch Projects art gallery in Soho.

It’s a mild January in New York. Despite the snow-covered streets, I manage to float down Greene St., posing as I move, treating the sidewalk as my personal runway. I’m completely disguised in black from the peak of my homo-hawk to the bottom of my patent leather Cuban heeled boots, creating an optical illusion of complete and total darkness. When I get to the gallery, predictably all the glamazons at the front desk totally ignore me, and I start to feel as tiny as a frigid cock.

“Um…hi. Today’s my first day as an intern.” I say while simultaneously trembling in my ball-crushing Ramones-style skinny jeans.

Then, an eternity later:

“Stand over there. She’ll be down in a minute” one of the main glamabitches scowls without actually taking the time to acknowledge my presence.

I’m waiting and waiting. Nine million seconds later, down comes this completely fiercerized bitch in an outfit I would wear if I did not also want to be raped and stabbed to death by fag haters.

“Here are some top secret documents I need copies of, don’t lose them or mess them up. Go to Soho Repro, don’t forget the originals, and I need them today no later than three, then go here and drop this tape off and pick up the one they have waiting for me and you can take your lunch whenever you want but do not eat any fried food in the gallery…” etc, etc, etc. 100,000,000 orders in a single breath; I’m starting to freak out. The basic drift: “If you don’t do what I say as I say it, right now, I will fuck you in the ass with a pumpkin.”

Her dominatrixxx-style of telling me what to do and this sense of doom that I will fuck something up and receive a pumping raping aside, I’m willing to do whatever she says because I’m stoked to be working in an art gallery.

What most people don’t realize is that there is something electrifying about the art world. Everybody in the art world is a total rock star. More than anything, the art world is a huge party. By “art world” I don’t mean like museums or whatever. I hate a museum. Too much shit to look at and I’m fucking ADD. I’m talking about art galleries. Everybody “in” the art world knows that, nowadays, art’s got zero to do with, like, paint and shit and everything to do with glamour, celebrity and sheer fabulosity. But of course they would never admit it.

I guess I was attracted to the glamour I thought “the art world” would bring me. As a   Boy Bitch, I stuffed my fair share of envelopes. I folded so many boxes that if I’m ever presented with another one again I might retaliate by shitting on it. I mean, yeah, it sucked to be doing bitch work for zero money. But I just loved being in the massive gallery around exciting art, greeting the celebrities—Lou Reed, Julian Schnabel, Chuck Close, etc.—who often came in.

The best part of working there, though, was manning the gallery desk. The desk boy, or girl, is almost always able to produce hard-ons and dampen vaginas while also managing to work whatever outfit they’re wearing. Sitting at the desk made me act like the gallery was mine; I was the dealer; I answered questions about the art. I got to be on display.

I’m sitting at the gallery desk in one of my trademark all-black outfits on a Saturday afternoon. I’m squinting my eyes and trying to look busy but what I’m actually doing is playing on Facebook when this young, obviously well-heeled and most importantly RICH guy comes up to the desk and asks about a painting.

Hot rich guy: “Who’s the artist for that piece?”

Moi: “That one’s by Aaron Young. It’s made by a large specially painted canvas and then motorcycles drive across the top.”

HRG: “Hi, Madison. You’ve got a really great look about you.”

I blush. But because I am black, I don’t think he can see it.

HRG: “My pleasure. See you around.”

I’ll be your boy bitch, okaaaay! Nah, I don’t think the guy was gay or anything, but maybe he was a famous photographer or a modeling agent or somebody, anybody, who could help me realize my goals of complete and utter world domination.


I don’t know how I came up with the idea to intern at a gallery. Basically I up and decided. Just. Like. That. All my peers told me that a gallery gig was difficult thing to snag because everybody wants to do it. Hoping my “@yale.edu” email would at least keep me from being deleted, I sent out trillions of emails to galleries inquiring about potential bitch-ships. David Zwirner. Gagosian Gallery. Tony Shafrazi. Andrea Rosen. Cheim and Reid. Metro Pictures. Michael Werner. No response. No response. No response. Yadda yadda yadda, I heard from Deitch that I’d be interviewed. The rest, cliché-ily, is history.

The funny thing is that I used to think art was totally inaccessible, especially museums. Some would offer that art galleries are equally inaccessible: imposing doors, tall ceilings, bleach white walls, virtually invisible staff. Galleries use the same language as the luxury boutiques I decried a while back. The only difference is that the art world is there to make people feel like they’re cooler than they really are. Galleries don’t typically sell art during normal business hours, because anybody who’s gonna buy some art has an appointment. Duh. So to build a brand around a gallery, gallerists rely on hip, People You Want To Fuck, and just like create this optical illusion of glamour. Maybe it’s a sad thing, but nowadays, glamour is art’s best friend.