Many of America’s strongest teen rock scenes were hit hard by the Vietnam draft and DelMarVa’s was no exception. 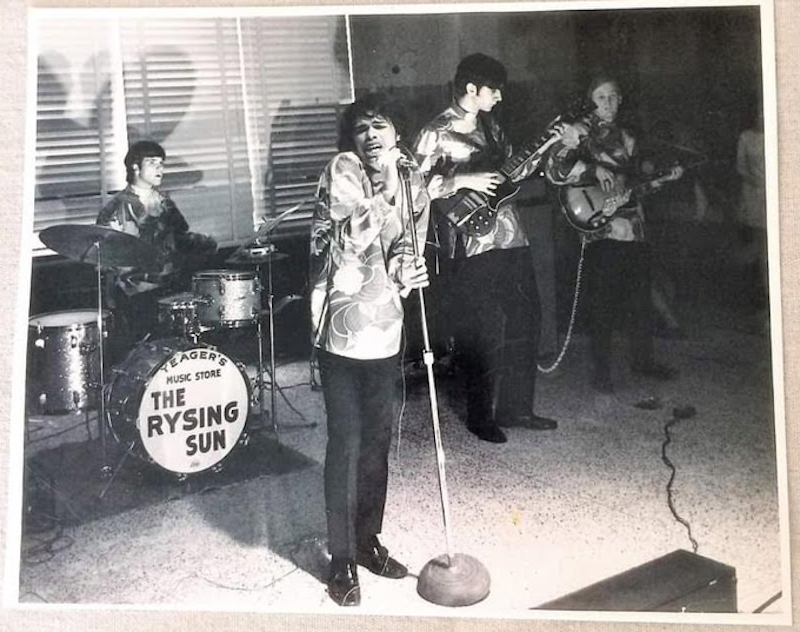 With memories of the Kenwood chaos still fresh, The Rysing Suns began to enjoy the rewards they’d earned as one of eastern Baltimore’s wildest acts.

Dave Collins: “We’d play Friday and Saturday nights and I think take home $30 individually. In 1965/1966, $30 in your pocket for working on the weekends and you were rolling in dough…”

Steve Boyle: “We could buy equipment, I could buy a motorcycle. Pretty much everything we wanted to buy we could.”

Dave: “I had a p.a. system I was making monthly payments on and I still had plenty of money to buy cigarettes and sneak them in the house.”

It was a dream job for any young DelMarVa combo, but came with complications. A few gigs into the stint Goldsborough suddenly found himself on the lam. The new drummer never warned his bandmates.

Dave Collins: “We had no way of contacting him. We had heard that the police knew he was gonna be in Ocean City at a gig. We were afraid he was gonna get pulled off stage right in the middle of an important gig, so we just got a replacement drummer.”

Goldsborough was never heard from again and apparently died under tragic circumstances at some point after the 1960s.

Their next drummer was Frank Canatazeritti’s friend Larry Lundy, a student at east Baltimore’s Patapsco High School. The former members fondly remembered Lundy as “a real Ginger Baker type.” He went on to play with the group for the remainder of their existence.

In addition to the O.C. gigs, The Rysing Suns/Rysing Sun were booked at the 1967 Ready Steady Go! Review at The Baltimore Civic Center. The Review was a package tour event put together by British TV series Ready Steady Go! Its headlining acts included The Young Rascals, The Cyrkle, and The Yardbirds. Another high profile gig found them opening for DC acid rockers The Fallen Angels, a band signed to nationally distributed label Roulette Records. The concert occurred at The Annapolis National Guard Armory and was sponsored by radio station WYRE.

Two other songs from the ’68 session: an untitled track the band members can’t remember much about, and “Can’t Decide.” Collins and Kramer have stated that the latter track—a soulful Stones-style ballad—was “overall the best song” they ever recorded. Like the untitled tune, “Can’t Decide” never got to vinyl.

Many of America’s strongest teen rock scenes were hit hard by the Vietnam draft and DelMarVa’s was no exception. In 1969 conscription spelled the beginning of the end. Collins was the first to get draft papers; Cantazeritti’s followed soon afterward. In their absence Kramer tried to form a new Rysing Sun with Boyle, Fitz, Lundy, and a new singer, but without Frank and Dave the magic was lost. By the time Collins and Cantazeritti had returned to Dundalk the other members had moved on to college, different bands, and day jobs.

In the spring of 1970 Steve Boyle joined Parkville folk rock legends/fellow Baltimore’s Teen Beat A Go Go alum The Fabulous Monarchs. Boyle’s time with the group was short as he replaced the band’s keyboardist Fran Breznicky, another musician whose career went on hold thanks to Vietnam. Breznicky returned to his Monarchs post after a year in the service. Boyle then joined the wedding band Inner Light. Their active workload helped the keyboardist pay his way through college. Once college was finished so was Boyle’s music career.

Sid Kramer spent the 1970s with three different prog rock cover bands. First was Clap (a combo fronted by a Tom Jones sound-alike named Mike Jones). Next came Island, and then Cabin Music; this group never played live but they did record hours of material while holed up in a Pennsylvania log cabin. Kramer passed away in 2017, but from the 1980s up until his final days he continued to jam sporadically with Cantazeritti and Collins at informal Rysing Sun reunions.

After the 1960s Cantazeritti didn’t spend much time as a working musician. Today he goes by the name Dr. Cantazeritti. He’s enjoyed a long career as an orthopedic surgeon.

Ken Fitzgerald’s days as a teen rocker also came to an abrupt end at the turn of the decade. From the 1970s on he took part in local jam sessions, but would never again work fulltime as an artist. Larry Lundy was the only former member connected with two legendary Baltimore psych-rock groups. In addition to drum bashing with The Rysing Sun, Lundy later played with Maypole. Though he wasn’t on the group’s sought after 1971 LP, he did join after they reformed in Holland in the mid-70s. Lundy’s life path after that is hazy with rumors of incarceration overseas and stray sightings at open jam sessions throughout the Baltimore area.

After Vietnam and The Sun’s split, Dave Collins played music for 15 years. His later groups included Jabez Stone (a Jethro Tull-esque prog rock group), Monopoly (house band for Baltimore nightclub The Latin Casino; this group was a top 40 cover band that featured former Tim Buckley collaborator Mark Tiernan), The Stand (a new wave band), and Secrets (a variety act that never released any music, but did manage to self-produce a live promo video). Collins also regularly performed as a member of the house band at Glen Burnie bar The Halfway House.

Through all of the music evolutions to come from the last 60 years, nothing has ever matched the imaginative chaos of “A Third Hour On Forty-Eleventh Street.” It’s the ultimate reminder of The Rysing Suns’ intense thrill ride through Baltimore’s 1960s teen scene and a monument to the boredom and restless energy felt by suburban teens everywhere.