No mainstream publisher, my time machine malfunction takes a trip back when printed matter mattered. 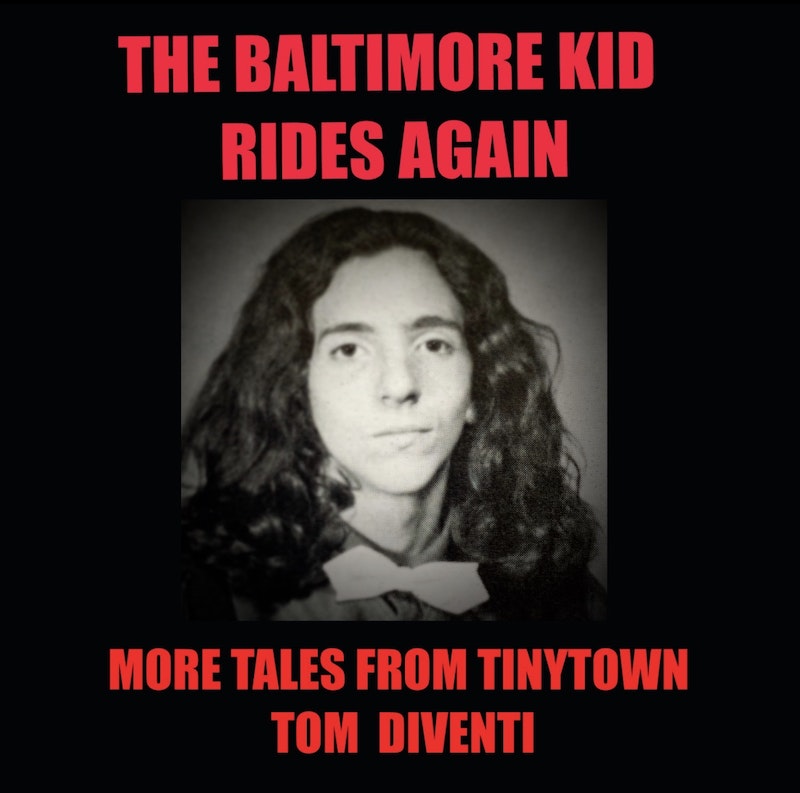 Last year Hecate Press in Brooklyn published my book, The Baltimore Kid. A batch of 30 collected stories culled from a few years of this weekly column at Splice Today. It contains tales of growing up weird outside of society and loving it. Some of the stories revolve in and around Baltimore and beyond. I’ve accepted my insignificance in this world. I embrace the act of conveying messages, sometimes cryptic, even puzzling hieroglyphs and cuneiform texts of confused words and images. I write because I can.

Stories about life in a strange backwater harbor town nestled by the Chesapeake Bay. I’m grateful to Hecate Press for that opportunity and also thanks to the editors at Splice Today for granting my besotted continuance along the path leading to divine madness, immortality, infamy and the secret of my great escape. I’m elated and disappointed simultaneously. Why bother to publish books? Does the world really need my meaningful insights and astute observations?

I’m no magician but I can easily disappear. A willing prisoner of my own victimization. Occasionally feelings of a cerebral jail break of bustin’ out of here. Free from the storage room of emotional carry-on bags. I have the ability to step out of my skin for a walkabout and observe, or stomp around inside my head looking for another reprieve. The Baltimore Kid Rides Again...More Tales From Tinytown. A compendium of stories coming out soon to anyplace near or far trapped in the worldwide web of ebooks and hard copy paperback editions. Available where fine books accumulate. Ready once again to shoot it out with that Tinytown posse coming to pick me off in my intergalactic antediluvian hideout.

It’s a linear ensemble of life. An old-time two-step beyond tomorrow. Starting with birth’s preconceived notions, traipsing through a bunch of events in the middle of it and then anybody’s guess how it ends. But we have a pretty good idea. Apathy Press Poets is enjoying a resurrection in 2020 from the garbage heap of futile literary pursuits. Not too many people read poetry. Don’t hold it against them. They don’t know what they’re missing. If they do it’s by choice. You can lead a horse to water but you can’t drown them. More useless are those who don’t read books at all.

Apathy Press Poets’ underground status from Tinytown’s halcyon days of poetic license leads to this point. No mainstream publisher, my time machine malfunction takes a trip back when printed matter mattered. Today Apathy Press Poets still cares. It’s not about the money; it’s about the love. Xerox machines were the hot rage. In the heyday of cut and paste, scissors, glue sticks, presstype letters, Xacto knives, white out liquid and tracing paper ruled the day. The entire hands-on approach to DIY publishing. I’ve described some of this in different ways before. There’s no time like the present to dredge up the past.

I can’t grasp why poetry and poets are so unwelcome, even despised. Poets diss other poets. Just as petty, prejudiced, vain and jealous as any human can be. The act of poetry, like music, should take you to new places. A mental health holiday. I view my own lowly caste in the inhuman condition of chasing money, scrapping and scraping by as a symptom of the bigger universal malaise. Driven crazy by a false culture to become that self-styled loner. My vernacular changes like the weather on different levels of my thick numbskull. A traveling one-man surrealist hambone band. Yakking it up, writing it down. Unwanted hometown once loved and cherished. They’ll grab your bones and balls. Turned out to be like all the rest. Petty people without an ounce of common decency. No moral compass or class. Not a shred of compassion for a life’s work.

Art should thrive in dangerous and shocking new ways to provoke the skewed sky we try in vain to touch. Nobody knows squat. It’s always best to believe absolutely nothing. Feet on the ground, head in the clouds with a wandering eye stuck in space. So much of Baltimore now lives in a gloried past there’s no room for then and now. Only enough room for one of everything. Looking back fondly to people that’ve gone before. Other places that were razed and bulldozed way before the reformation of any gold rush urban planned new reality.

Moving ahead in the game there’s no mystery to it. It’s a wide-open book that nobody wants to read. Could be had for a song and a few bucks. The only connection to the past is the fact you’re still breathing. The give and take of a town can tear you down to the core. Use up your good name, erase your face, address unknown. The city makes or breaks. The sound of endless prayers whispered unanswered.

No turning back. No cool oasis. No invitation from a Tinytown of sentimental old fools. Was I mistaken to believe in ghosts from the past? Why bother trying? There’s a queasy unwelcome feeling from strangers in the old neighborhood. No greetings or fond tidings. No small wonder why nobody cares where you’ve been or where you’re headed. Wanted dead or alive. Just a kid from a Tinytown.