Reflections on a Baltimore neighborhood. 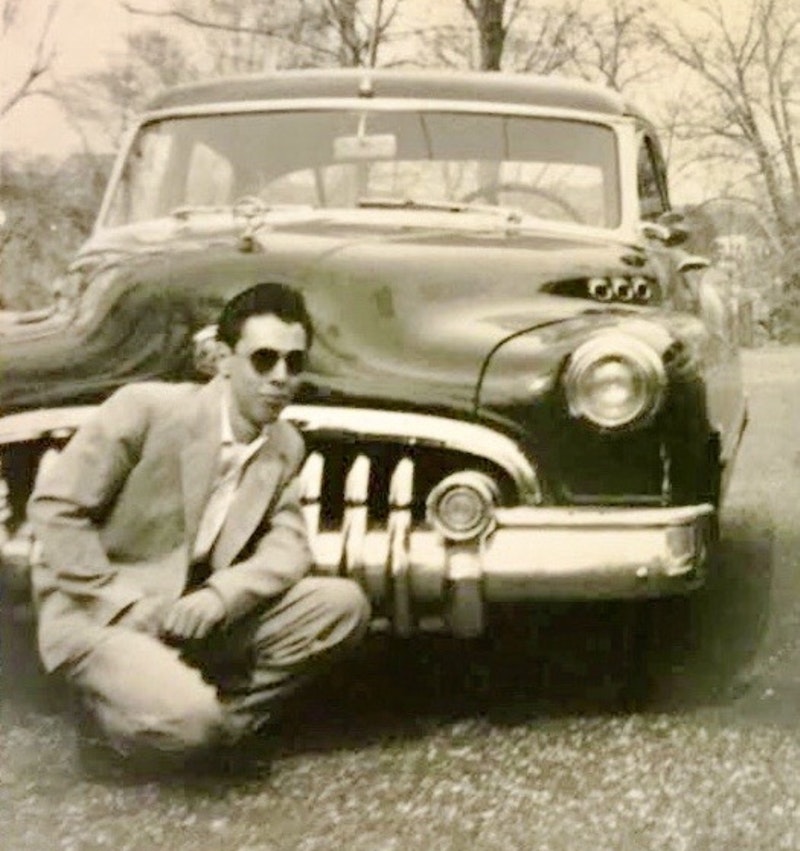 My dad Lou with his 1950s Buick Roadmaster.

In the early-1960s several generations of Baltimore families lived in the working-class neighborhood of Waverly. Located in Johns Hopkins University’s backyard, next to Charles Village, Waverly was a Johnny Unitas-loving, eat them steamed crabs type of community full of pride. I spent my early childhood on Whitridge Ave.; it’s also where my dad Lou was raised.

The sound of kids on metal roller skates echoed over the blocks of modest, Victorian-influenced rowhouses. Canvas-striped awnings introduced the properties’ porch front entrances. Some two-story homes had a gathering spot for neighbors; the iconic white marble stoops. The marble steps were from Cockeysville’s Beaver Dam Quarry, cut by hand and hauled by oxen to the rails.

Tall sunflowers planted behind snapdragons provided a backdrop for the long, narrow backyard gardens. Morning glories covered in dew nestled themselves along the alley’s fences. Altar boys made their way to St. Phillips and James for mass. The sycamore tree-lined streets stood as a testament to a quiet neighborhood’s balance with nature.

Every week, a little before 11 on Saturday mornings, an almost extinct, mostly African-American Baltimore folk tradition occurred. There’s commotion in the alley. A house sparrow’s chirp goes silent. Clip-clops grow louder as jingle bells jingled. Dogs in the neighborhood went insane at this point when they heard the familiar loud, sing-song chant.

Here come the arabbers, street peddlers who hawked produce directly to the neighborhood from horse-drawn carts.

Upon hearing the cries, grandmothers and moms dropped everything. They grabbed their coin purses and ran out the door. The women made their way down wooden back porch steps avoiding clotheslines full of laundry. Parked in the alleys, the hand-painted carts were ready to do business. Small crowds gathered for first dibs at fresh fruits and vegetables. Dressed in bells with feathered plumes, a gotta-go pony took advantage of the opportunity to relieve itself with a three; that’s a number one and two. When in season, you’d see straw-filled boxes on the carts full of gurgling, soft shell crabs from the Chesapeake Bay.

“Yep, just picked this morning, early this year. C’mon over here, look at these beauties. Have a taste,” the peddler said. Grandmother is offered a slice of a ripe Maryland tomato. Heavens to Betsy. The tomatoes were so delicious; one can never forget the sublime taste.

A spirit of prosperity thrived among Waverly’s happy customers as they walked away with huge bags of groceries for a five-spot. This was farm-to-table, the old-fashioned way.

In the 1950s Baltimore, if you saw a bunch of teens hanging out, smoking cigarettes, you’d might think they were up to something.  Back then there were two rival street groups. One was a greaser-type of juveniles called the “drapes.” They clashed with their preppy counterparts the “squares.” Those nostalgic times are depicted in a couple of movies, Barry Levinson’s Liberty Heights and John Waters’ joyful tribute Cry Baby.

In the golden era of leather jackets, bobby socks and peg leg pants, Baltimore’s guys and dolls really did know how to shake, rattle and roll. My father, “Big Daddy Lou,” would’ve been considered a drape. In his case, he was never in trouble or anything shocking or rowdy.

Lou forged lifetime friendships with his Blackjack throwing down card buddies, Snooki, Danny, Ardie, Nicky and Paul. The sign of personal accomplishment for these guys was simple: they had cars. And what’s more American than that?

After a hard night of burning rubber, mornings found the young men busy on the streets. After all, putting in a little extra time and effort into polishing spiffy-looking vehicles was a labor of love. Lou’s set of wheels, a 1950s Buick Roadmaster sparkled with shiny chrome side treatments, some toothy smiling grillwork and three-hole body stamping on both sides.

One day Lou took me to one of his favorite hangouts, a small grocery store called Bentz’s on the corner of Barclay and 29th Sts. Oriole Park was once located directly across the street in the early-20th Century. Bentz’s had it all—a checkered black and white tile floor, an old-fashioned soda fountain that sold floats and malts and floor to ceiling pine wall paneling. The place looked divine. To a youngster, everything seemed tall. My nose couldn’t reach the top of the red vinyl covered bar stools. I playfully spun the stools around in circles with my small hands.

Lined up like soldiers along the counter were big glass jars filled with beet pickled eggs and big onions. Far counter side sat a plate of warm coddies with a handwritten sign: 25 cents each. Quite a deal for the Baltimore-style codfish cake that included a packet of white crackers, mustard on the side.

Then I saw something.  Stooping over I leaned forward, pressing my nose and hands against a large glass display case leaving a long, noticeable smear. My eyes popped out of my head like a Tex Avery cartoon. The case was filled with an assortment of mouth-watering treats including: Bonomo Turkish Taffy, Pez, wax buck teeth and red lips, “Yikes Stripes” Beech-Nut fruit stripe gum and the notorious trio of cavity-filling rippers, Black Cow chocolate caramel on a stick, Sugar Daddies and Sugar Babies. What’s a boy to do? I stood frozen, hands jammed into my pockets. A state of self-levitation took over. Visions of candy floated in the air. Meanwhile, Lou showed his kindness by introducing me to his friends.

The owner, Mr. Bentz, came over to say “Hi.” He wore a trademark soda jerk waist apron, and reaching into his pocket he put something in my hand. It was a Tootsie Roll. An ear-to-ear grin magically appeared on my face.

Lou passed away last year. Going through some storage boxes, Mom and I discovered dozens of deckle edge border snapshots. Reminiscing over the heirlooms, we recalled highlights of our family history.

During the 1960s, like so many other neighborhoods in American cities, Waverly changed. Unfortunately, the tragic saga of discrimination and devious practices like redlining and blockbusting permanently altered Baltimore’s neighborhoods. How did it happen? If you want to know more about Baltimore’s tumultuous past, I recommend Antero Pietila’s excellent book Not In My Neighborhood.

In today’s complicated world, at least now I can remember times like a little Waverly boy sipping a Royal Crown Cola sitting under tin ceilings with parquet floors. Finding those forgotten photographs was a great gift.