Tearing Down Statues in Baltimore Is Wrong

Only Luddites want to lobotomize history. 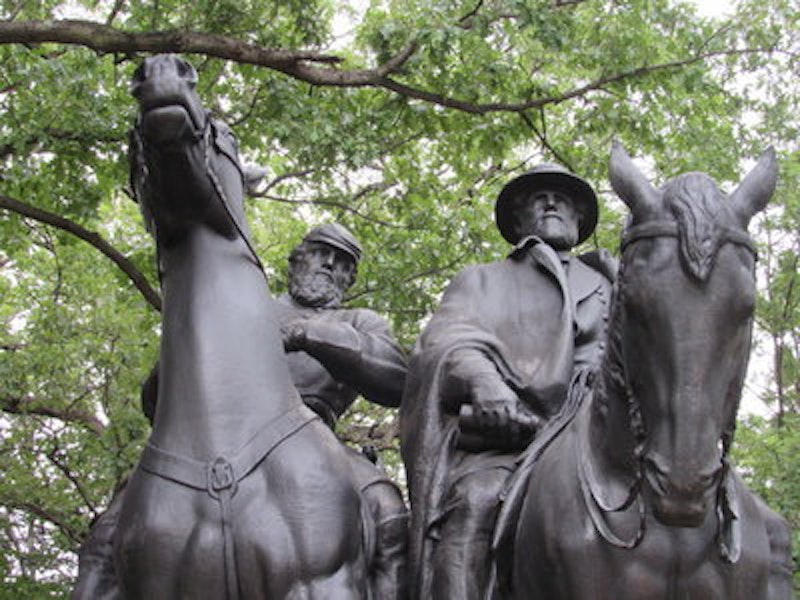 There are numerous official reasons why Baltimore is called “Monument City.” Statues serve as centerpieces in reenactment ceremonies, memorials in cemeteries, monuments in public squares and the phallic Washington Monument presides over Mount Vernon Place in honor of the nation’s founding father figure. One of the many is the statue of Robert E. Lee.

In the Northwest quadrant of Baltimore, there is also Roland Park, a leafy warren of graceful old houses on a sloping hillside that was once among the most segregated communities in America. Blacks and Jews were prohibited under its covenants from living in what is billed as the nation’s oldest planned community. The Roland Park website declaims, with characteristic understatement: “Its early planners were less than innovative in the social dimensions of development, advocating the deliberate exclusion of economic and racial diversity.”

And now, in 2015, youthful in American history by archeological standards, come those who want to lobotomize history, a non-violent version of ethnic cleansing, by eradicating from our memories that which is unpleasant and preserving only that which is satisfying.

Such an exercise in selective memory is folly of the symbol-minded. It is akin to the Luddites smashing machines to blunt progress and ISIS destroying precious antiquities in the ancient Syrian city of Palmyra in an attempt to sledgehammer civilization into ideological submission. Many of those who herald the destruction of cultural heritage wouldn’t know the difference between a history book and a roll of toilet tissue.

Leading the local knee-jerk is Baltimore County Executive Kevin Kamenetz (D), who is joined by City Council President Bernard C. Jack Young (D), both of whom until now have kept their incandescent brilliance hidden from public view. They want to re-christen Robert E. Lee Park as Lake Roland Park. Where do the voters find these guys?

Robert E. Lee Park is city-owned but situated in Baltimore County. A statue of Robert E. Lee, the general who led confederate forces during the Civil War, is located in the neighborhood around the Baltimore Museum of Art. Mayor Stephanie Rawlings-Blake has planted herself squarely in the political middle of the competing tugs of social demand. She plans to appoint a commission to inventory the city’s monuments, especially those associated with the Confederacy, and decide how to accommodate their social value before any is toppled or removed.

The drive to uproot history is part of the national whiplash against the confederate flag, characterized as a symbol of hate, following the gunning down of nine black worshipers at a Charlotte, SC, church by a racist young white man, Dylann Roof. The flag is coming down at many state capitols in the South.

According to a report in The Baltimore Sun, there are at least nine monuments in the city marking the confederate era among 80 military statues. It should be remembered, too, that Maryland had a split personality during the Civil War, half Northern sympathizers, half Southern. And the Mason-Dixon Line runs across the state like a right-brain, left-brain reminder of the abolitionist-pro-slavery past. (The Mason-Dixon Line, a nasty intra-mural dispute for centuries, resolved a border dispute between Maryland and Pennsylvania. It is also the line of demarcation between Northern and Southern states.)

The critic, Louis Mumford, observed: “Monuments are so we’ll always remember, and memorials are so we’ll never forget,” a distinction, astute readers will discern, but not a difference. The statuary of either nomenclature helps us recall who we were, for good or ill, and are visual guideposts through a nation, state and city that is still very young and struggling with its own historical identity. Erasing or neutering the past will not cure what ails America, let alone reconcile racial strife. It is pointillism without a point.

George Washington had slaves and so, too, did Thomas Jefferson, who fathered children during a long affair with the mixed-race Sally Hemings. Yet no one has suggested bulldozing Mount Vernon or demolishing Monticello or the Jefferson Memorial. France and Great Britain helped to finance the South during the Civil War to insure continued production of cotton. We continue to eat French fries and English muffins. The past and the present co-exist, often uneasily, as a social continuum of national unity.

Yet Robert E. Lee has suddenly been exhumed from the dustbin of history as an outcast and a racist lout. I invited Blair Lee IV, the son of Maryland’s former lieutenant governor, to illuminate the competing attitudes about his famous ancestor.

First, a little background: [Francis Preston] Blair Lee IV, B-4 in shorthand, is living history. He’s the reigning scion of a family that includes the Blairs of Blair House and the Lees of Virginia. While Robert E. Lee was leading he Confederate army, Montgomery Blair was Lincoln’s postmaster general. The family has also contributed Maryland’s first popularly elected senator, nine members of Congress, a World War 1 hero, a U.S. ambassador and three presidents of Montgomery County’s council. Lee’s grandfather was a state comptroller and his father was a Maryland delegate, senator, lieutenant governor and acting governor. And add to those bloodlines a couple of signers of the Declaration of Independence, Francis Lightfoot Lee and Richard Henry Lee.

Let Blair Lee speak for himself in an email about his family ghost, Robert E. Lee:

“Robert E. Lee described slavery as a ‘moral and political evil.’ So why did he decide to lead the Confederate army that was trying to win independence from the Union so slavery could continue in the South? There are two answers; first, you need to understand Lee’s background. His father was a spendthrift wastrel who abandoned his family and died penniless. Lee’s older brother followed the same path, so Robert spent his life pursuing duty and honor as a reaction to his father and brother. Second, in 1861, most Americans viewed themselves as citizens of their states, not of the Federal Government. Think of it this way; do you consider yourself a graduate of your neighborhood high school or of your county school system? Lee wasn’t about slavery, he was about duty and making what he thought was the honorable choice confronting him.

“Lee pursued duty and honor at great expense. He knowingly sacrificed his U.S. Army career (he graduated second in his class from West Point) and command of the Union army which was offered him in 1861 by my great, great, great grandfather, Francis Preston Blair, on Lincoln’s behalf. Lee responded that he could not draw his sword against his native state, Virginia. He also lost his home, Arlington, which overlooks D.C. and became the National Cemetery.

“After the war, Lee became a leading voice for reconciliation and turned down lucrative job offers and book offers because he viewed it as unseemly to personally benefit from the deaths of the men he led in battle.

“Revisionists who want to paint Lee, today, as a traitor are misguided and open to this question; where do you stop? Do we delete the slaveholding presidents from our history? If we’re going to erase all Confederate symbols and names, how about our references to Great Britain, a foreign nation that attempted not once, but twice, to enslave us? Should we rename all the states, counties and highways named for British monarchs?

As an addendum to [Blair] Lee’s commentary, it should be noted that upon negotiating the terms of surrender with Gen. Ulysses S. Grant, Lee counseled his troops to “go home and become good citizens.” As for Lee, he went on to become a celebrated educator and president of what is now Washington and Lee University, in Lexington, Virginia, so-named to honor him. So let Robert E. Lee Park retain the name, let Lee’s statue stand and allow Roland Park continue to make peace with its past.