There Is No Miracle in Anarchy

On the recent Baltimore protests. 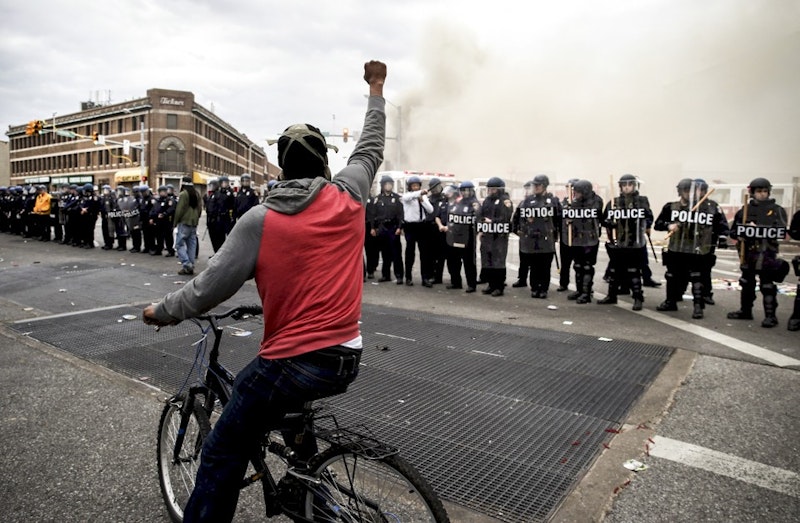 For most people Baltimore is known as the City that Reads. This slogan is printed on benches around the city. People who take public transportation wait on those benches. This week those people will stare as much as they will read.

They will stare at the National Guard in the daytime. When night falls they will stare at the National Guard outside the windows of their homes. Those who disobey curfew will be profiled. Those who are profiled will be arrested. The sight of the newly arrested will serve as a magnet for journalists and protestors. Those protestors present will be absorbed into a conflict that they cannot fully understand. The individual who does not understand is very different from the person who cannot understand. There is a finality in the latter that is absent in the former. This finality has the baggage of shame.

Those journalists present will absorb this conflict of words, sounds, and images and transmit a filtered meaning to the protestors. That meaning will cause further upset. Someone will take that meaning to heart. That someone will enter the road to becoming no one at all. They will cease to be. Someone else who does not live in Baltimore will read about their ceasing to be. For the person in Baltimore they do not have to read. They can see.

To the audience outside Baltimore one interpretation is that a French Revolution style button may seem to have been triggered. After the recent Ferguson protests this interpretation is met with much more skepticism. The journalists present on the streets have reached the height of skepticism. In the images and the sounds it is impossible to discern protest. They are images and sounds of truancy and anarchy.

The truant is a person who has never grown up. He is the definition of a young and undiabolic spirit. The anarchist is someone who destroys in order to reach perverse communion amongst others who would destroy him to preserve themselves. The truant has hope of growth. The anarchist sees no hope. Conspicuously absent from this group is the adult, the pillar of reasonable protest and meaningful dialogue. There is currently an image in the media of a Baltimore city adult in a physical altercation with a young man. Why? She attacks him because she knows that he is her son and that he is on his way to protest. She knows that in the spirit of the current protest that her son is entering an anarchic realm which no young American boy is prepared to face. She will read the logical conclusion of that lack of preparation because she will not bear to see it.

Americans taking to the streets are always an odd sight for a global audience. This audience has greater experience discerning the strata of protest. They instantly recognize when anarchy assumes the disguise of protest. Because it does not represent constructive dialogue anarchy should be condemned. What is happening now in Baltimore is very similar to how anarchy in Europe has developed in the past two centuries. Particularly with Spain in the early 20th century anarchy occurred as a response to a rejection of the feudalism. People existed either as peasants or government employees. There was no middle class. Rather than draft plans for civil protest anarchists drafted plans for explosives. More bombs were used in rejection of the governments of Madrid and Barcelona than were logical arguments posed against their privilege. This quantum leap by Spanish anarchists represented a belief in magic and miracles. Within decades this anarchy would produce not change but fascism.

What is there then to protest against in Baltimore? Anarchy must be protested against. There is no miracle in anarchy.