Life is Cheap on Streets of Baltimore

A sense of panic has settled in. 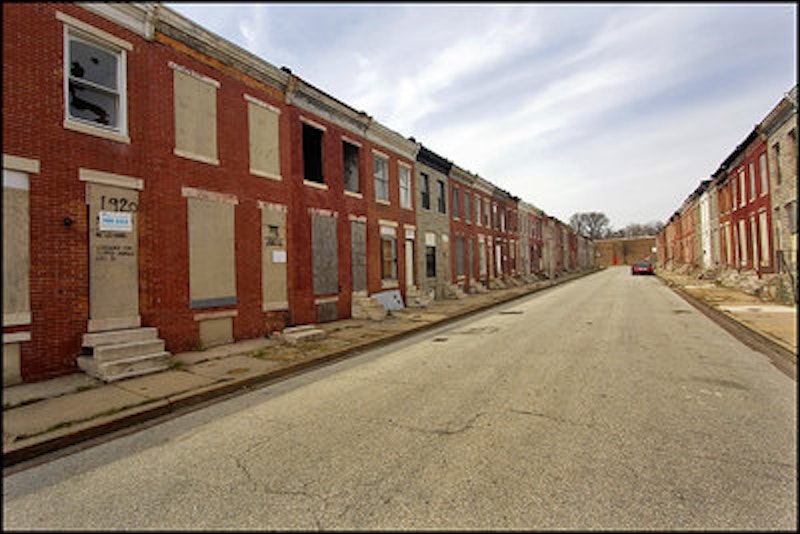 Baltimore’s getting away with murder. By the time you read this, another dozen or more people will probably have been shot to death in the city. Then again, maybe they won’t.

Life is cheap and disposable on the streets. As of this writing, the body count for the year is 129, with more than six months left for the killing spree, on track to once again punch through the arbitrary and frightful ceiling of 300 toe tags, the red line established in 1999. The all-time high of 353 killings was set in 1993. Weekends are the most lethal in the blade-and-bullet trade.

In the month of May, there were 42 shootings—pushing the total to 89 more than this time last year— probably more than the number of American servicemen who were killed in proxy wars oversees over the same timeline. Many of the victims are innocent kids on street corners caught in the crossfire of drug deals gone sour.

To illustrate the fluxions of the carnage, there were 197 homicides in the city in 1978, 196 in 204, 219 in 2012 and 235 killings in 2013. And today, with 129 murders so far and the year not even half over, Baltimore could witness one of is bloodiest sieges in recent years after what seemed like amnesty on the streets in the previous decade.

Statistically, Baltimore ranks among the deadliest cities in the United States, up there with Detroit, Chicago, New York and the District of Columbia. Be aware that at the current pace Baltimore will no doubt reclaim the number one spot that it held for a number of years. And, parenthetically, as if that weren’t bad enough, Baltimore not long ago had the nation’s second highest incidence of AIDS cases, one of the highest cancer rates (because patients move here for treatment at the city’s two major medical centers) and an off-the-charts number of tuberculosis cases. Pick your poison.

So as another election year approaches, all of a sudden everyone has a plan to stop the killing: more social services, more overtime, more cops, more recreation centers, more desk cops in uniform and on the street, more “foot patrols,” as they’re called in the curious collection of diphthongs that native Baltimoreans call a language.

The ministers of influence have tried gun buy-backs, put cops in cars for greater mobility, adopted and then abandoned “zero tolerance: at the insistence of black leaders and now they’re even trying to make model citizens out of felons with multiple convictions. And while we’re at it, even the prisons aren’t safe from marauding gangs.

The reverse of the medal is also true. The iPhone has now assumed the properties of God. It is everywhere and sees everything. The only ones who don’t seem to know it are cops. With the death of Freddie Gray while in police custody, the killing streets of Baltimore have joined other cities where blacks have died from police bullets or have been clubbed senseless—Ferguson, Cleveland, Chicago, New York, North Charleston, South Carolina, Los Angeles and McKinney, Texas, where a teenage black girl was wrestled to the ground by a cop who also pulled his service revolver on bystanders. There have been more than 400 fatal police shootings so far this year, according to a Washington Post analysis. (Cops in South Carolina and Ohio are the latest to face charges for fatal shootings.)

Baltimore has summoned the Justice Department to review its police procedures. The General Assembly has convened a committee to study ways to discipline cops. Consultants have been paid serious money to reorganize the police department. And Baltimore has engaged the debate over whether to equip its cops with body cameras. But at the heart of the Baltimore debate, as in other jurisdictions where citizens and cops are at an uneasy standoff, is the city’s police commissioner, Anthony W. Batts. Batts seems to be gradually losing the confidence of the police force he is supposed to lead.

His officers had been accused laying back on the job for fear of being indicted or landing in jail as six of their colleagues (three of them black) did in the Freddie Gray death. Batts apologized profanely to his men for appearing to not have their backs at a time of great danger and civic crisis. And Mayor Stephanie Rawlings-Blake, her mayoralty in jeopardy over the April riots, will say only, “I support the commissioner.” That has the ominous rustle of pink slips.

Funny thing. In quieter, pre-drug days, the foot patrolman on the beat, swinging his espantoon (a Baltimore neologism for Billy club), used to be the arbiter of neighborhood disputes—judge, jury, disciplinarian and family friend. All of which raises the question: Who wants to be a cop anymore? Why, even back in the bad old days, that swashbuckler of a police commissioner, Donald D. Pomerleau, had a whack-a-do idea that was never really tried: During the summer months, give everyone an air conditioner so they’ll stay inside and off the streets.

And, get a load of this: The late lovable master of malaprop, Councilman Dominic Mimi DiPietro, behaving like a manic prison warden, once proposed building high-rise prisons, with the really bad guys being sentenced to the sweltering top floors and the mild-mannered thugs being rewarded with ground-level cells. Say what?

And Maryland learned that capital punishment never worked, was not a deterrent, because murderers understood the state’s reluctance to pull the plug or inject the lethal juice. One convicted killer, for example, languished on death row, on the taxpayers’ dime (actually, about $40,000 a year), for 22 years through appeals and delays. Maryland repealed the death penalty a couple of years ago, so that’s no longer a threat.

But the model most frequently cited is the zero tolerance policy that New York adopted under then-Mayor Rudy Giuliani (R), which cleaned up the city by cracking down on nuisance crimes. Then-Baltimore Mayor Martin O’Malley (D)—now a presidential candidate—hired the consultants who designed New York’s novel approach, and even recruited a police commissioner right out of central casting, Edward Norris. O’Malley’s application of zero tolerance is now under fire.

Zero Tolerance didn’t work in Baltimore because, unlike New York which has a diverse population, Baltimore has a disproportionately large (69 percent) black population which rebelled against the concept and is now cited by blacks as among the causes of the April riots. Nuisance crime records, in which no charges were ever filed, were expunged by the 2007 General Assembly. (O’Malley, as governor, also decommissioned and demolished Maryland’s infamous House of Corrections at Jessup.)

What the champions of zero tolerance didn’t say, however, is that the city of New York paid out $583 million in claims against the city under Giuliani’s reign, the bulk of it to settle charges of police brutality, according to The New York Times.

Question: can anything really be done to stay the shooting? And the answer, sadly, is probably no. No, because the shootings are mainly spooled together with the drug trade. And drug dealing is big business and that’s why many of the shootings are happening.

The shootings in Baltimore appear to be limited to certain neighborhoods and on specific street corners, and not in a massive all-out war on society that has the entire city under siege as in a Bruce Willis mayhem movie. And yes, the tragedy is that innocent victims, many of them children, often get caught in the crossfire.

But mainly they are turf battles involving drug dealers and drug deals gone sour, as documented by David Simon, chronicler of Baltimore’s life on street corners. Another entry into the madness is the so-called Latino MS-13 gangs, and their rivals, whose badge of courage is extreme violence. (Fourteen members of the Black Guerilla Family, considered Baltimore’s most violent gang by the FBI, were indicted recently on charges of conspiracy and drug trafficking that included murders and attempted murders.)

To the doubters, and there are many, there are assurances that most areas of the city are safe, but, to be sure, there are certain neighborhoods that should be avoided as if they’re battle zones.

The number of homicides actually did decline in Baltimore under O’Malley’s zero tolerance program. But his political error at the time was the promise to reduce the number of murders to the specific figure of 175. He cut the number to 253 in 2002, but in 2003 the number rose again to 275. A political promise made is a promise that had better be kept. Google is everybody’s rap sheet. Bottom line: The worst thing the city can do is create a pandemic of panic.