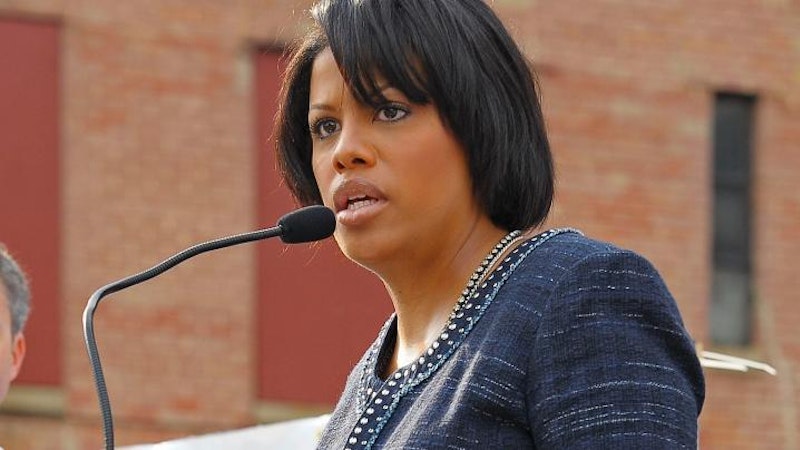 Mayor Stephanie Rawlings-Blake owes it to Baltimore’s people to resign. Her actions since the death of Freddie Gray have been confounding, consistently heartless, and entirely self-serving. Since April, Baltimore has been burned, occupied, put under curfew, held hostage by its own police department, and shed more blood than it has in decades. Throughout these awful months the Mayor never ran out of excuses or people to blame, never stepped up and demanded meaningful action or significant reform, never once acknowledged the true scale of how big the city's problems had become or how quickly everything fell apart. Most significantly she never lost track of what was most important—her own career.

Set aside the rest of her time in politics for a moment. Ignore impossibly optimistic campaign promises like 10,000 new families coming to Baltimore, or her equally laughable pledge to end homelessness. Ignore the theft of a broken speed camera system and her administration's effort to keep it a secret, or her support for the publicly-financed money pit that is the Hilton Hotel. Forget about the watered down audit bill, the free year in office this government awarded themselves, self-serving vanity projects like Vacants To Values, Safer City, and #OneBaltimore, or property tax cuts so small that they only existed long enough for the Mayor to take credit for passing them before disappearing completely. Ignore the hopelessly mismanaged Baltimore Grand Prix, her veto of a completely reasonable body camera bill, or her regrettable commitment to the destruction of unsanctioned homeless camps. Set these concerns aside, that's not what this is about.

Nor is it about shutting off water to residents but not businesses that owed millions, or the fact that many residents lost their homes over a few hundred dollars worth of unpaid water bills. It's not about having to repay federal homeless grants after failing to account for how the money was spent, her plan to close down rec centers and use the savings to pay for more prosecutors, or avoiding paying court ordered damages to victims of lead poisoning. It's not enough that she diverted community impact grants to the Horseshoe Casino, or spent over $80 million on new water meters, or officiated the wedding between the city's two most powerful lobbyists. It's not even enough that she gave hundreds of millions of dollars to wealthy developers to build up the richest part of town in the most corrupt real estate deal this city has ever seen, while blocking reform efforts to bring developer subsidies under tighter control. Lots of cities have terrible mayors, but being terrible is rarely enough of a reason to resign. So ignore all that. It's not important right now.

When Police Commissioner Anthony Batts made the baffling decision to force a confrontation with unarmed students getting out of school on a Monday afternoon, he set forward a series of events that made Baltimore City the most dangerous place in American for a night and the most newsworthy city in the country for a month. The Baltimore Police Department's own union even concluded that the Commissioner was more interested in public appearances and re-framing the debate from one of police brutality to violence in the streets. The facts were there, but Rawlings-Blake wasn’t interested. For months she never demanded answers or held the Commissioner accountable for his decisions; instead she blamed the people of her city, blamed it or the actions of a suspiciously irrational, violent mob. The “thugs.” But it didn't stop there.

For weeks the excuses kept coming. It was gangs!, they shouted. Outside agitators are coming to Baltimore to cause chaos! Prescription drug thefts are fueling city violence! Freddie Gray broke his own neck! Each new excuse came as unsubstantiated as the one before it, and through it all, through all the mounting evidence against the truthfulness of Batts, as the police held their silent protest and the bodies continued to pile up in record numbers, throughout all of this the Mayor refused to take real action. She supported the police commissioner 100 percent, up until the exact moment it became more trouble to keep him than to fire him. But Batts wasn't fired for losing control of his department, or inventing threats against police out of nothing, he wasn't even fired for starting the actual riot in the first place. He was fired because he became personally inconvenient to the one person Mayor Rawlings-Blake cares about in this city. But now he's gone and it's her turn to go.

When she hired Batts, Mayor Rawlings-Blake hired someone exactly like her. Someone relatively young, monstrously ambitious, and with an eye on the next job, the next step up, the next promotion. She hired someone who was for most of his tenure capable of delivering short-term results and improved numbers. They built a record they could both run on before moving on to something bigger while never caring enough about the city to scream for radical reform at the risk that someone else might be in power by the time those efforts pay off, and they might miss out on receiving credit. Even now, even after everything Baltimore has experienced the past few months, despite all of it the only real reform being proposed is newer and more effective riot gear for what they see as the next inevitable round of unrest.

Mayor Rawlings-Blake: you have to resign. Not for the numerous allegations of corruption against your department heads, or for taking the brave stance of speaking out against marijuana reform, nor for paying millions to consultants and their consultants to consult the city on ways to save money. You shouldn't resign for any of the reasons I've listed. You have to resign because the death of a single human being wasn't enough for you to take action. The death of a single man in the custody of police wasn't enough for you to demand answers and seek reform on your own because it was the right thing to do, instead the people had to take to the streets by the thousands to demand answers to how and why this man had to die. If it were up to you Mayor Rawlings-Blake, the world would never have known the name Freddie Gray, nor any of the others to come, and there will be others. You have proven unequivocally that the value of a single life means very little or nothing at all to your administration and Baltimore City will always be a distant second to your own ambition. A person like that isn't worthy to lead. This city is too important and we deserve better. It's time to resign.