What Baltimore Talks About

When it’s not about Freddie Gray. 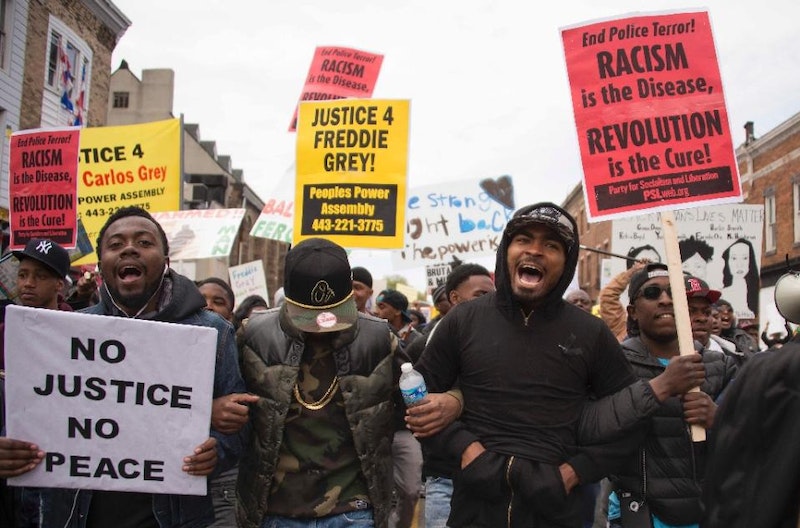 We should’ve seen it coming. How could a movement based on prioritizing the least powerful and most prone to systemic abuse sustain itself when a basic level of respect for their communities and standards of living didn’t exist. The lives of those in Baltimore's poorest neighborhoods have never been a true priority in this city or state, and after the death of Freddie Gray, we mistakenly allowed ourselves to believe that was all about to change.

For a month West Baltimore was the center of the universe, or at least it seemed that way. “This is when everything changes, this can no longer be ignored,” we told ourselves. Baltimore City took to the streets by the thousands over a simple though historically radical demand, Black Lives Matter, and the death of a single man in the custody of police would no longer tolerated or ignored. But what was once a day-to-day, minute-by-minute focus on demanding respect for black lives has been pushed aside and now we only talk about issues when they affect police, even though the most important questions remain unanswered.

When we talk about the unrest rarely do we ever seriously discuss whether the decisions made by the police commissioner were ultimately the real cause of what happened. We don't ask nearly enough how a ridiculous rumor could possibly be enough to require the mobilization of 100 fully armed riot cops and an armored urban assault vehicle. We don't ask why students looking to cause premeditated acts of violence didn't consider bringing any weapons with them. We don't ask what the point was in shutting down transit and forcing a confrontation with students trapped with no where to go. Two weeks ago, police commissioner Anthony Batts was on the radio and made the claim that even now he doesn't know who made the decision to close down public transit; we never stopped and forced him to explain how someone in his position could still not know the answer to that question. How could we let that claim go unchallenged?

Instead the focus is on how many police officers were injured. We talk about who gave what order and when and why. We ask why police weren't given more authority to smash the riot before it could spread past where it began. Batts drops to his knees and begs forgiveness from officers and their union leaders, but he isn't apologizing for creating a pointless, life-threatening, business-destroying confrontation and tossing police into the middle of it. Instead, he apologizes for not arming them sufficiently, for not allowing them to be more aggressive, because ultimately their safety seems to be more important than anyone else's.

Worst of all is the idea that the unrest began when violent “thugs” made the suspiciously irrational and, we're told, unprovoked decision to begin throwing rocks at police officers for no reason other than Freddie Gray was dead and they were angry about it. This faulty premise was allowed to take hold and gain traction, and to most outsiders it appeared like a confrontation like the one on April 27th was essentially unavoidable, that police leadership was blameless, that everything that happened could be attributed to the actions of a mindless, violent mob. The rest of the state and country quickly bought into this theory and found it easy to simply blame the riot on the actions of what they've always seen as consistently violent black communities. That made it so much easier to ignore what happened next.

When Baltimore City suffered its most violent month per capita in the city's history, a month that began with a deliberate police work slowdown, we never stopped to talk about responsibility or duty. Instead, we focused on fears real or imagined that police officers experience on the job, specifically the fear that if they were to commit a crime on duty, then State’s Attorney Marilyn Mosby might file charges and they could be held responsible. We allowed that ridiculous premise and miserable excuse to take hold, and even though the bodies piled up it took weeks for political leaders, especially Mayor Stephanie Rawlings-Blake, to even acknowledge the possibility that a police work slowdown may exist, while never seeming to care if any of these deaths were preventable. In the midst of violence not seen since the heights of the crack epidemic, we never threw our hands in the air and demanded an answer to the question: Are police allowing this to happen? That was unconscionable, and we’re all to blame.

Instead, we wasted a month allowing lesser concerns to dominate, like if violent criminals were inspired by the lawlessness brought upon by peaceful protesters, or if looted prescription drugs and the gang warfare these drugs encouraged were to blame. We asked why police weren't allowed to make arrests of anyone caught on camera throwing rocks. We put up billboards to identify looters. We watched Rawlings-Blake give her unconditional support to the police commissioner, who issued empty threats of more officer arrests as a result of reforms that aren't on the horizon, reforms that he’d lobbied against just a few months ago.

Yes, police matter. Their lives matter, their safety matters, even their feelings matter, but that wasn't what this was about, that wasn't what brought the people to the streets. If the police and their union want to be part of the solution, to do more than kick down doors and chase the first person who runs, if they ever choose to use their vast lobbying resources to help improve the standards of living in the communities they patrol, when they finally realize that building a Baltimore on par with the rich counties that surround us is in their best interest, only then will Baltimore have a chance to heal, but not before.