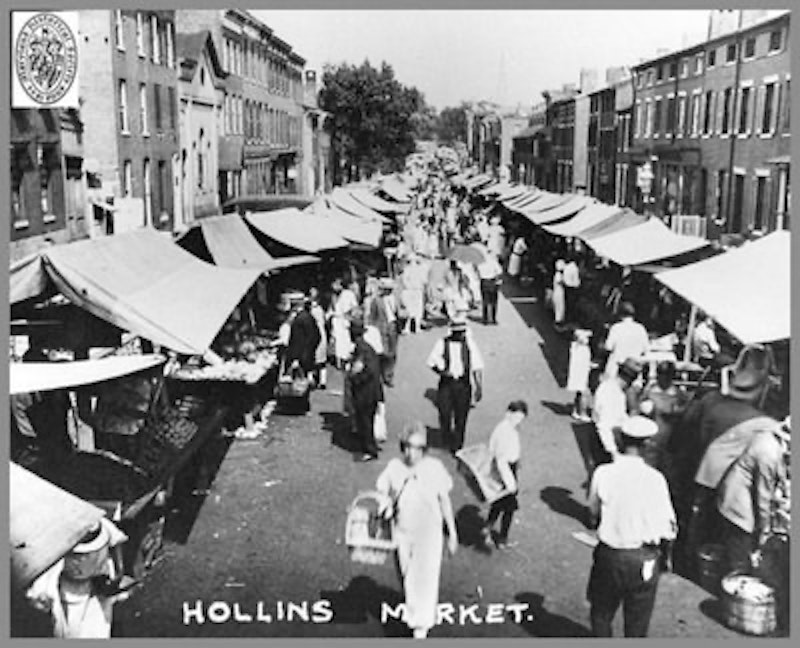 We sat upon the hill under a giant oak tree next to Garrett Heights Elementary School, my old alma mater.  Many an idyllic summer’s eve was spent there, between Junior High and High School, with Mike and Kevin pondering our prospective futures. Through a misty haze of herb and beers, we laughed off the fears and impossibilities of life in the grown-up, normal, modern world. Off in the distance poking out from above the tree line was Baltimore City. The pointed spire of the Bank of America building and the cold gray square of the USF&G tower glimmered like “Emerald City.” What magical wondrous things were in store for us down there in Baltimore, the city of our dreams?

Kevin’s dream ended abruptly that fall at the age of 18 from a drug overdose. He was the first casualty of many to follow throughout my life. Mike and I made it to the city together and soldiered on to be the survivors we are today. As artists, poets, musicians… we somehow eked out a life in Baltimore. Initially finding apartments and lofts in warehouses, abandoned storefronts, alley carriage houses, anywhere we could find cheap rents. I shared a loft with other likeminded folks in the late 1970s above “Hanratty’s Pub” on Eutaw St. between Franklin and Mulberry Sts. The rent was $70 a month, and we were often hard-pressed to come up that paltry sum. Hanratty was a retired cop who for reasons beyond me liked our band Da Moronics, letting us play in his pub. A few years later he changed it to “Sgt. Peppers Club.” By then we were playing at the ”World Famous Marble Bar” around the corner on Franklin St., but that’s a different story.

This is about how the city uses and abuses artists, musicians and poets through exploitation, intimidation and neglect. It’s the same tired diatribe. Artists gather to live and work in a neighborhood that’s relatively affordable; as time passes the area becomes a popular hangout destination. Bars, boutiques, coffeehouses, restaurants and art galleries start popping up here and there. Slowly property values and rents go up until the artists can no longer afford to live there. It’s happening now in my old neighborhood of Lauraville where we sat upon that hill pondering our fates. It’s happened in Federal Hill, Fells Point, Waverly, Hampden, Remington, Canton and Charles Village. The only exception is Southwest Baltimore, aka Sowebo.

Sowebo was a diamond in the rough. At its core is the Hollins Market, the oldest of the city markets. It runs the 1100 block of Hollins St. between Arlington and Carrolton Aves. and holds a rich history of notables, among them Edgar Allan Poe, H.L. Mencken, Billie Holiday and Babe Ruth. By the early 1980s the neighborhood had lost 35 percent of its population. Some developers started buying up properties around Hollins Market. There were already some artists living and working there, but now the gold rush was on. To attract new residents to the neighborhood, people like myself and others were offered newly renovated apartments.

I jumped at the opportunity to live in a rent-free second story walk-up above John Fonda’s erotic art gallery. John was a classic Baltimore character who loved to stir up the pot to create controversy and drama. His gallery was a focal point that drew artists to the neighborhood. John was a great teacher and a provocateur. I remember him at one of the early Pow Wow festivals in Ferry Bar Park taking clay from the riverbank and making Raku sculptures, firing them in the wood fire pit where I was grilling bbq chicken wings. He also played a very colorful, unconventional Santa Claus every year. He once gave me an ashtray he made shaped liked the USA with the American flag superimposed on it. I cherished that ashtray until it was broken during a party.

In 1983, Ted Getzel, a poet from NYC, opened Mencken’s Cultured Pearl Café at 1116 Hollins St. At first they were  trying  to be like Marconi’s or Haussner’s restaurants, old style formal dining and it didn’t work. Then Teddy changed the menu to Tex-Mex and it was a huge success. It was also a haven for poets and poetry readings. Just about every poet in Baltimore has read there at one time or another. Jack Trimper’s Street School was an after school store front gallery/workshop for the kids in the neighborhood, to teach them art and a place to exhibit artwork. Jack also had poetry readings and music events. All this activity was generating a lot of buzz and the abandoned storefront buildings, apartments and houses started filling up with artists, their friends and families. A diverse community was growing.

Max’s Market Café, next door to The Cultured Pearl, started getting involved too. Bands and poetry readings were happening everywhere. Bob’s video store opened on the corner of Hollins and Carrolton Sts. offering obscure films and cult classics. Rudy’s Patisserie baked and brewed the best pastries and coffee in the city at that time. Rudy was an Austrian baker who was also a free-spirited biker. I spent many mornings sitting at Rudy’s sidewalk café nursing a hangover and reading the paper. Speaking of hangovers, Scallio’s Tavern on Hollins St. was a crazy beer and a shot joint. The men’s room still had a urinal trough filled with ice. It also had a bulletproof entryway with a Plexiglas revolving wheel for carryout. Sonny and Frank Scallio were old school Italians. The walls of the bar were crowded with old nicotine-yellowed photos of boxers and racehorses. Even the Scallio brothers got in on the action, hiring bands and having poetry readings. My favorite bartender there was Dickie Hertz aka Larry Vega, the host of The Larry Vega Show. It was a local live comedy show reminiscent of the Merv Griffin, Mike Douglas and Johnny Carson talk shows but with a flavor only found in Baltimore. The only people who weren’t making money were artists.

The Hollins Market was thriving. The Tom Thumb Tavern at the corner of Hollins and Arlington Sts., a local dive bar, was turned into the Gypsy Café, a little bar and restaurant with a grass patio. Even Hollywood showed up. Barry Levinson’s movie, Avalon, was filmed around Hollins Market. The original Public Station restrooms were renovated into Anthony Coradetti’s glass blowing studio and a few doors down the block, Black Cherry Puppet Theatre set up shop building a theater house that still exists today. The Tell Tale Hearth opened in the mid-80s. The Medusa Social Club, an afterhours haunt for the hardy night lifers and overzealous early morning crowd, catered to the wilder side of life. The Pair O’ Dice Gallery and bike shop was there for a while too. The place was jumping. Over a quarter century of Sowebo festivals under their collective belt and The Lithuanian Hall’s yearly Night of 100 Elvis’s. You couldn’t invent a more vibrant and creative community.

Then the bottom fell out. Baltimore City Hall forgot its promises and pledges to renovate Hollins Market. When the money came in, it mysteriously disappeared. Vanished like the money supposedly generated from the Maryland State Lottery going to the city schools. Like the alcohol tax, and the casino profits, into thin air. The sick joke gets worse. Open air drug markets started sprouting up everywhere, 24/7 around Hollins Market. Daily multiple calls by taxpaying homeowners went unanswered and ignored by the Baltimore City Police Department year after year, until years became decades, no response, and no action taken to protect and serve.

You didn’t need a brain to figure out the fix was in. You didn’t need a heart to feel the pain. But you needed all the courage you could muster. I give a tip of the hat to those who still live there.  And meanwhile, the local drug task force would set up sting operations to trap and bust locals in the neighborhood for nickel and dime bags of pot. It was ludicrous. People split in a hurry and places closed quickly. And the murder rate? Mencken’s Cultured Pearl Café closed down in 1998. At any given time, every day of the week, you can see the faithful standing in lines, leaning at 45 degree angles, doing the zombie shuffle, coming  out of the alleys, down the sidewalks, and into the streets. Waiting in line for a quick fix. If you go in the Hollins Market today it reeks with the stench of fetid flesh. Not very appetizing. Empty stalls fill the market and empty storefronts line the streets. It’s a disgrace. This is one Baltimore neighborhood that stands alone. Forgotten by the pols and doers of good deeds. Gentrification never looked so plug ugly. You can’t sweep this blatant neglect under the city’s carpet. Artists will always find a place to live, but bringing a neighborhood back from the dead takes more than money or magic.