I never received the news flash that artists are rich these days. 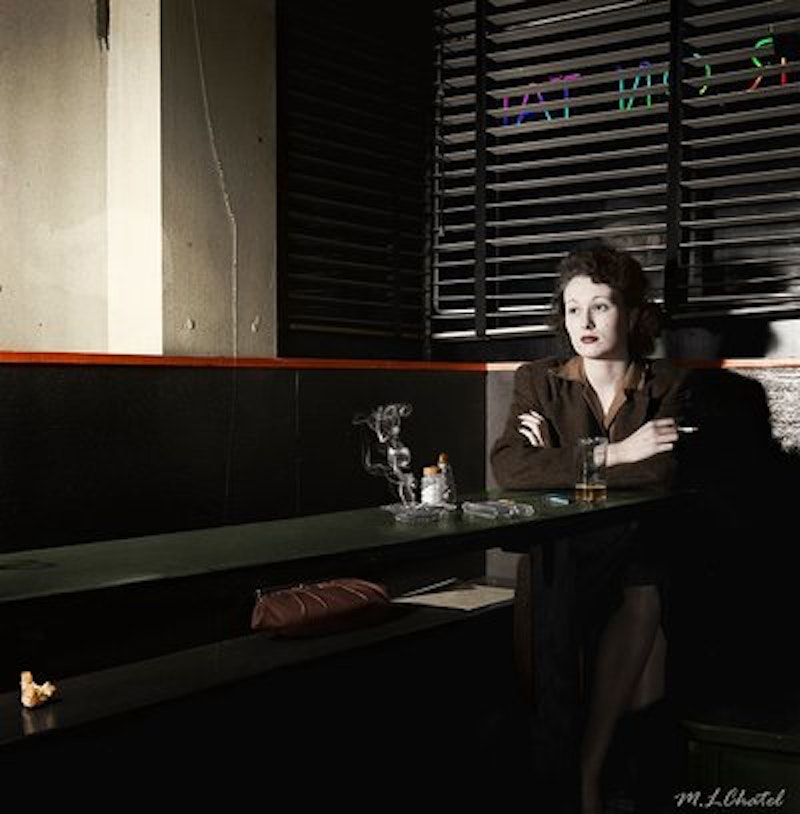 Reflecting on ancient afternoons, sitting alone in dark bars around town, nursing endless drinks, quietly smoking. There was no greater joy. Time stood still. The pleasures of daydreams, thoughts, and emotions. Hours of deep nothingness as the smoke curled into the dark mirror double image, of you sitting there staring through yourself. Until Happy Hour arrived and the empty bar suddenly filled with the day shift crew ready to forget the rut they just left. You came out of your self-induced coma and snapped to, ready to chew the fat with whoever lets you bend their ear and spot you a drink. I was a professional.

That was years ago. Today you have to hide if you still smoke, and need a small fortune to drink all day and night. In this politically correct society, it’s frowned upon to fritter away hours alone in bars drinking during daylight hours. Much less to enjoy a leisurely cocktail and a cigarette while letting the jukebox play. What’s repugnant in today’s pop culture, I found charming, romantic, and enlightening. They want to see, and be seen, in the scene. I chose to hide and mind my own business with the like-minded denizens of dipsomania.

Today you need a manual to figure out the menu list of beer offerings and cocktail concoctions in so-called bars. A shot and a beer is just so low-rent. The bartender was your personal psychiatrist and confidant. Now you’re lucky to get served by these amateur barkeeps. They’re usually too busy explaining the 35 beers on tap and daily specials to tourists. They get offended if you leave a 50-cent tip because they opened an overpriced bottle of suds for you. Meanwhile you just paid $14 for a burger and some potato chips. They attempt to appeal to their ilk and cater to hipsters and tourists, forgetting about the people who’ve lived and grew up there. I’ve been called a hipster. I’ve also been called a yuppie. That’s not the point.

It’s common in American cities now. A transition from how things were always done to a new gentry mindset. The young entrepreneurs who move into old neighborhoods and transform them into a cold generic idea of what they believe it should be. It’s fine until people get hurt. I have nothing against sincere business folks trying to make an honest dollar. They forget the most important ingredient of their success is the people who live there, not a gone-tomorrow tourist, slumming in some trendy neighborhood bar/restaurant. Some call it progress. The locals never had a chance.

What confounds me is how the hell these artsy types can afford the leisure of today’s fashionable watering holes. Either they’re blowing the whole paycheck on a weekend bender, or living off their parents. A few years back I visited my old 1990s neighborhood in Williamsburg, Brooklyn. I was dismayed at the blatant Soho-like atmosphere. It was a cartoonish block after block diorama of cafés, coffee shops, art galleries, and boutiques. The outdoor cafes are filled with beautiful, young, fashionable people who apparently don’t have to work. I never got the news flash that artists are rich nowadays. I guess it depends on what your definition of art is. I don’t rightly know, but I know what it ain’t. It reminds me of the Root Boy Slim song, “So Young, So Hip, So Lame.”

Everyone has their heads stuck in their phones or tablets. Wearing earbuds and gazing hypnotically at the little glass screens. People walking down the street oblivious to traffic and other hazards. The art of conversation and human interaction is doomed. It’s a modern tragicomedy. I have no stake in any of what’s happening now. I find it to be a never-ending parade of uselessness. A sideshow. A telephone directory of self-important, undeserved entitlement. Doesn’t anybody suffer for art anymore? It is so easy now to click that “like” button for a thumbs-up? Why did Facebook get rid of the “unlike” button? Are we so sensitive that we can’t accept rejection? Don’t get me wrong: disdain, petty jealousy, and contempt were around way long before social media.

A few decades ago, in order to do anything, it was a phone call, Xeroxing hand-made fliers, a newspaper calendar, word of mouth, and a hearty handclasp. I’d just published a trade copy book of short stories by a New York writer. We had a very successful book launch party at the Gershwin Hotel in Manhattan and I really wanted to do another in my hometown, Baltimore. I made the call to a friend who ran the avant-garde bookstore and arts performance space in town at that time. He was a publisher, so I believed he understood the importance of it all. He assured me he’d take care of promoting the book release party on his end, as I was in Brooklyn, and not to worry.

The date arrived for the book launch. We packed up the car with cases of books making it to the Baltimore bookstore just in time for the scheduled event. Entering the store I see my friend with a look of fear on his face. “Oh,” he said as we stood there holding boxes of books, “I forgot.” Needless to say, I no longer hold this friend in high regard. He showed us his true colors the moment we walked in the door. He was from the school of “isms” and esoteric, psychobabble art. That pompous “I know better than you” bullshit. We were from the school of “We don’t care” and “Hard knocks and dirty socks.”

You have to take a person for their word, mutual trust and a promise. I still get quiet satisfaction knowing I did the right thing back then, by not reacting and stomping the shit out of him. I realize none of it matters. It never did. All the posturing and self- aggrandizing, all the feeble attempts to be heard above the din of the herd. Looking for some sort of acceptance in an unfeeling, unknowing, uncaring crowd.

We’re merely sentient bags of poo, bouncing positive and negative energy every which way but tomorrow. Dreaming our dreams of life unlived. Belching and farting our way into oblivion like some infernal contraption. Every night we dream someone else’s dream, the same dream. And on nights when we gaze at the stark moon, pondering the grand illusion. Could the moon be just a reflection of what the earth really looks like? A reverse mirror image of an empty barren wasteland. In our dream we all see it together differently. And in our daydreams we look away from the sun’s reflection, thinking possibly that too is really just another reflection of the earth burning, consuming our days and nights, all of us burning together and dreaming endlessly, as billions of stars shine on.