Anarchy and Apathy in Charm City 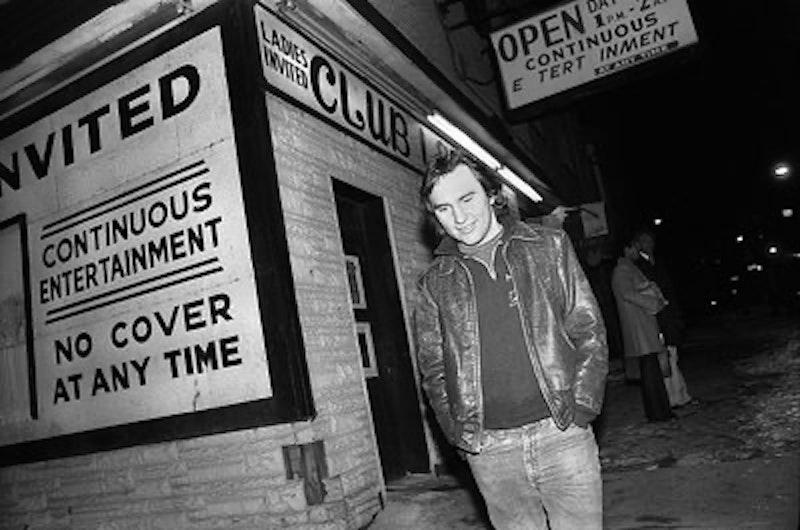 I got my first guitar at 12. It was a Kent hollow body, three-pick up electric, with “f” holes, a Sunburst finish and a whammy bar. It also came with a little Tone King 8” speaker box with 3–D volume and tone knobs for $39.99 from Two Guys department store on Belair Rd. I took some lessons at Geblein Music Studio on Grindon Ave. and Harford Rd. Professor Geblein was an ancient stodgy German conductor whom I was told conducted The Baltimore Symphony Orchestra. The very first lesson he said, “So you vant to play like Mister Jimi Hendrixes with a bang and da boom swish de boomda boom, but first you must learn to read and write the music.” “Fuck that,” I thought. I wanted to rock… fast forward to 1976.

America’s Bicentennial celebrations had a lasting effect on me, just a scrawny, freakish, 19-year-old art student with a rebellious nature. There was no escaping the red, white, and blue patriotic symbolism bombarding every aspect of life in the USA that summer. Living was easy. Peace and prosperity seemed like it was just around the corner. Baltimore was still a sleepy little burg by the bay. The high-tech world was in its embryonic stage, auto-erase typewriters and cassette tapes were all the rage. We were middle class, dissatisfied, young and dumb. The world of possibilities was limited to the traditional 9-5 drudge of a dead end, meaningless routine for the next 40 years, becoming a bum, or a rock ‘n’ roller.

A spring afternoon in 1976, Billy Mo and I were sitting around scheming, drinking and thinking up our next “poetry performance” piece when Piggy arrived with a new album hot off the record shelf. He put it on the turntable, cranked up the volume, and our lives were instantly transformed the moment we heard, “Hey! Ho! Let’s go!” The Ramones had arrived to save the day. Of course we already had Iggy Pop and the Stooges, The New York Dolls, Lou Reed and The Velvet Underground, Frank Zappa and the Mothers of Invention, Captain Beefheart, T Rex, even the dinosaur bands like Pink Floyd, Zeppelin, Sabbath, The Stones, Bowie and Eno, but in some primal way this was different… three chords and almost three minutes of the truth and a prayer that you could survive anything with the right music. That was the day Da Moronics were born. Shortly after that, The Sex Pistols invaded with the release of Never Mind The Bollocks and away we go. Our band name Da Moronics came from a combination of the name “Baltimorean” and the moronic idiocy we saw around us daily in America, very much like the scene today. Also the fact that the lyrics to many Ramones songs were moronic too.

1977 spewed out the movie Saturday Night Fever and the NYC nightclub/disco Studio 54. The novelty song “Disco Duck” had come out a year earlier, but now disco mania was sweeping the nation. It was getting serious. Everybody wanted to dance the night away snorting coke and sniffing (amyl nitrate) poppers. We hated disco, and wanted to destroy it. As a band, Da Moronics started out with just Billy Mo Moriarty and me on guitar writing songs as a team. We were like the Martin and Lewis of punk rock. Our first gigs were at the Apathy Project, a carriage house I moved into on Lovegrove Alley between Preston and Biddle Sts. It was a multi-purpose space with an art gallery and living quarters combined. There were art exhibits, poetry readings, and live music shows there for a year or so. With the help of poet Phil Smith, we even managed to get a measly $150 grant from the Maryland Arts Council. The original Apathy Project lasted about 18 months. There were other versions through the years.

We started jamming with drummers and other guitar players. The late Pete Haskell was our drummer for a few months, but he also played guitar and couldn’t decide which one he wanted to play. Mac Lore played guitar for a while too. The final lineup of the original band was myself on guitar, Billy Mo on lead vocals, Hoppy Hopkins on drums, Dave “The Rave” Brubaker on bass, and Jamie Wilson on congas, percussion, and drums. What we lacked in musical abilities we made up for in energy and insanity. I had to move from Apathy Project since I was always broke. The original song list was growing but we also did a few covers. Hank Williams’ “Your Cheatin’ Heart,” The Animals’ “It’s My Life,” Velvet Underground’s “We’re Gonna Have a Real Good Time Together,” The Troggs’ “Wild Thing,” and “Stepping Stone”, by The Monkees, among other golden oldies.

Our original songs were varied. A few of my favorites are “Cancer,” a scathing condemnation of the state of medical care and how it’s cheaper to die in America. After a show one night a young lady who had cancer was verbally attacking us, saying there was nothing funny about the song and she was offended by it. “Cripple Green Beret” was a song about a Vietnam veteran without arms and legs. “Coma Baby,” about the infamous baby that was making headlines then. “Child Molester,” a song about a creep who might live on your street. “Mr. President,” about a letter written to Jimmy Carter, which made it to yellow vinyl disc in the punk compilation, Thirty seconds over DC. Disco Sucks, our anthem against disco.

One more I’ll mention was “Clean American,” a haunting tune rejecting all American values and morals. A show we performed one night at the Towson University Student Union Center was met with fierce opposition by the Towson Tigers football team. During the song “Clean American,” Billy Mo grabbed an American flag that was near the stage and started dancing around with it. The football jocks pelted us with cups full of beer, plastic beer pitchers and ashtrays. Eventually they stormed the stage and wrestled the flag away but we kept on playing.

Another memorable gig was at the original Madams Organ in D.C.’s Adams Morgan, sharing the bill with the black punk band Bad Brains. Madams Organ was managed by Billy Adler, a guy who years later helped organize many Sowebo Festivals. We partied all night there and slept on the stage floor. Joints and Natty Bo’s were a buck each. There were some bad times too. Early on we were booked at The Marble Bar on Franklin St. when it first opened with original owner Scott Cunningham, who also had the Bucket of Blood Blues Bar on Charles and Mount Royal Sts. He opened the Marble Bar as a blues club and booked Da Moronics. We were the only punk band in town at that moment, he had no idea what we were all about and we didn’t tell him. The audience had no idea what they were in for either. We dove into our set with high velocity non-stop songs, bouncing off the walls, one after another, “Talking in Tongues,” “Perry Mason USA,” “Starsky & Hutch,” “Fred Flintstone,” “Africa,” “Black Velvet Painting,” “Sub Shop”…  they didn’t know what hit them. It was pandemonium.

The owner, a blues aficionado, hated us and said we’d never play the Marble Bar again. Some months later he was gone, Roger and Les Lee Anderson took over and we were playing there again. I never will understand why white guys playing blues songs were so seriously snobby about a genre of music they never had anything to do with. Like they invented it. Roger and Les Lee were true visionaries and allowed the punk bands free reign in their version of the bar that became The World Famous Marble Bar. So many great and weird bands played there during Roger and Les Lee’s years there, too many to mention.

By then the deluge of bands was a tsunami. Every week a new group was coming out of the basements, attics and garages of Baltimore. Punk was now a credible force. We no longer had to be scrutinized and judged by those “others” who didn’t get us. But we didn’t care. That’s what it was all about. Not caring about the American dream/nightmare. It was sex, drugs, and rock ‘n’ roll. It was safety in numbers. It was boredom and clichéd. It was attitude and lifestyle. It was apathy and anarchy and we loved it. A brief Roman candle, shooting star, road flare burning bright and burning out.

In 1978 we finally made it to CBGB’s in NYC. The punk rock mecca of the times. It was a great gig that was recorded and will be released later this year to celebrate the 40th Anniversary of Da Moronics. At the time we didn’t realize the significance of it all. We barely recalled all the events of that evening. A band on the bill called The Worms stole our microphones and a bag of percussion instruments. One of our drummers said all he remembered from that night was waking up the next morning with some strange girl’s butt in his face. That’s more than I remembered from that night.