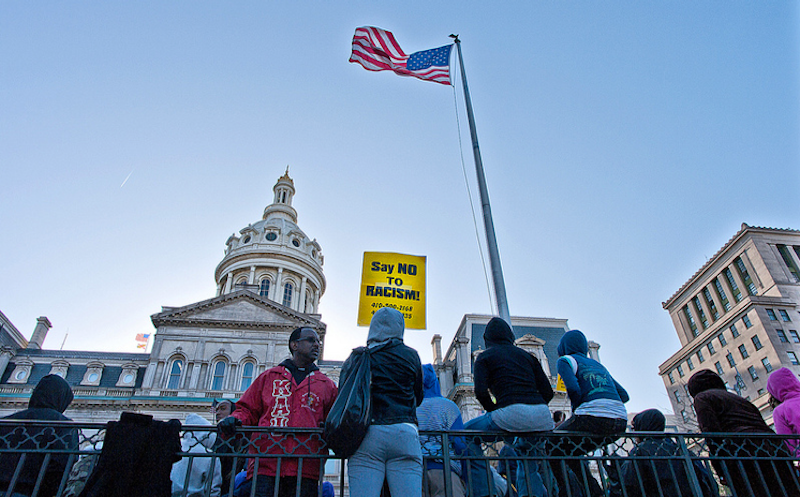 Baltimore is a war zone. It’s physically divided, with white neighborhoods, black neighborhoods, white clubs, black clubs, and cultures that rarely intersect. Our own niches are safe, comfortable, and predictable. A lot of people say Baltimore feels like a small town because they stay within their own milieu, with the idea that going too east or too west is a death sentence, and just isn’t something you ever want or need to do. It’s a shameful, inhuman mess of a situation. Parents in the suburbs inculcate their kids into believing that if they ever go into Baltimore City, they’ll be raped, stabbed, robbed, and pillaged by scary drugged-out “gangs” and “thugs.” Mean-spirited people who might call themselves libertarians or Republicans, cite “personal responsibility,” “boot straps,” “making something of oneself” when discussing poor black communities, as if the circumstances of our prep school world and the experience of a poor black or Hispanic teenager in East Baltimore are similar at all. Black Americans and people without money are treated as second-class citizens in this country, and Baltimore is one its most stark visualizations.

It’s depressing and scary how rigid these racial lines are. With the recent skein of violence and the ramped up aggressiveness of the police department, the whole city is on edge in a really bad way, and I can feel with each passing year, the likelihood of any meaningful integration happening in the near future diminishing more and more. It was slow on Charles St. Thursday night, with roads blocked off and stages almost built for the start of Artscape, and already an increased presence of cops. I was at the Crown, an amazing new bar and live music club at the corner of N. Charles St. and North Ave., on the second floor of the Hyundai Plaza office building. They have an insane set of JBL speakers and a great sounding room with a pseudo-Twin Peaks vibe. Adventure’s set made my bones vibrate.

It was a slow at first but sort of picked up after 11:30, with maybe 30 or 40 people at the bar, predominantly white. Three black men from around the neighborhood ask me for the details on the place downstairs, and they go inside to check it out. After I go back upstairs, I sink into one of the couches on the left wing. Everyone is cloistered around the L-shaped bar on the opposite side of the room, except for the three men who just went in, all sitting on a single couch to the left of the stage. Alexander Trust is playing. They scan the room, seeming bored and uncomfortable, and after fiddling with their phones, they leave, not five minutes after they had entered. I’m pretty sure there wasn’t a racist person in that room, but there’s an enormously dense wall of fear and cultural dissonance. And Baltimore is a liberal city! As someone who’s lived in the Northeast and Mid-Atlantic his whole life, I can’t fathom what it would be like to grow up in hate-filled areas like Boston or parts of the South. From experience, I really think people in Baltimore, across racial and cultural lines, are generally nicer and more amiable than anywhere else, and we’re conducive to full, meaningful integration. It’s not hate or conscious racism separating us—it’s the fear of the unknown and the dangerous.