Off the Beaten Track at Baltimore's Artscape

The city’s weary annual festival still has plenty to offer. 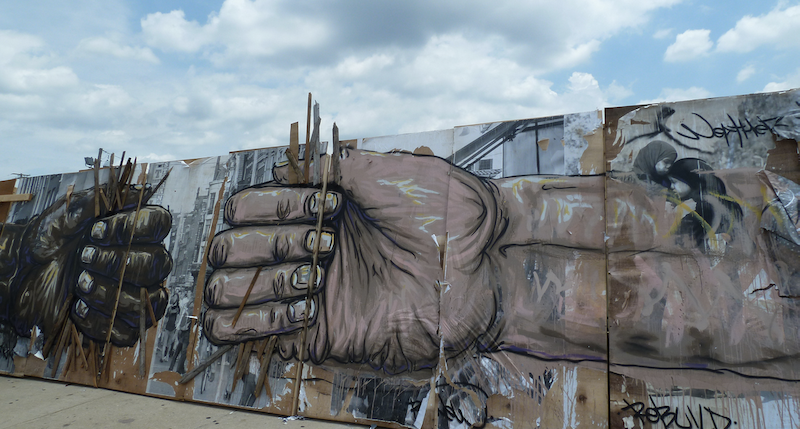 Baltimore’s annual Artscape is just a city fair minus the rides. There is one consistently amazing program each year called “Worlds in Collusion” (formerly “Exotic Hypnotic”), run and organized by the High Zero Foundation. Six or seven hours of avant-garde and experimental music in an air-conditioned, comfortably seated lecture room. Most of my fond memories from Artscape weekends of the past 10 years have been there at the University of Baltimore: seeing friends Needle Gun play in 2009 with a new lineup, Rjyan Kidwell’s set the same year, a dense and percussion heavy composition by master musician Sam Garrett in 2011, and this year, Matmos, to name just a few off the top of my head. Even though they’re funded by the city, High Zero kowtows to no one. In a festival environment where “art” is reduced to motel paintings, chintzy jewelry, and overpriced funnel cake, barbeque, beer, and soda, it’s a small miracle that “Worlds in Collusion” continues to thrive, with packed houses and a spot on the main drag of Mt. Royal Ave.

The only disappointment is how secluded and sectioned off the program is. Although it’s well promoted and patronized by plenty of people in the know, “Worlds in Collusion” happens in a place where the general public, who might not know anything about experimental music, never interact with it. Aside from occasional curious passersby, family members, and people who’ve been dragged in by their friends, the whole thing goes down cordoned off, contained, quarantined even away from the carnival goers. Obviously the city wouldn’t give High Zero a spot outside (although Horse Lords, one of Baltimore’s best and most oddball “rock” bands, headlined the Station North stage this year). I doubt the High Zero Foundation would want to make the kind of concessions necessary to get a more visible spot, and they’ve got a great thing going, for people who know.

I really enjoyed soaking in the Soundnest this year, a new installation at the corner of Mt. Royal Ave. and W. Lanvale St. Organizer Ryan Smith asked me to perform improv in a tent at Artscape, but I didn’t know exactly what it would be like or who would come. I didn’t get a chance to check it out until Sunday, when I saw a billowing pink and white tent enclosing three trees on a median strip, with dozens of people streaming in and out. I walked in to find my friends Austin Redwood and Ben Currotto playing as Wind Delay, with participation from the people sitting down and passing through: there were bells, kalimbas, cymbals, mallets, and other percussion instruments for everyone to join in. The performers stuck to creating ambient sounds with a lot of space for imagination and interpretation. The most heartening thing was seeing how it all the little kids were into it. Hope against hope the city lets them do it again next year. Preaching to the choir gets boring after a while. It’s really nice to see something that exposes people to music and ways of making sound that they might never had heard otherwise, instead of another funnel cake stand.