At Godfrey’s Steer ‘N’ Beer no one remembered your name. 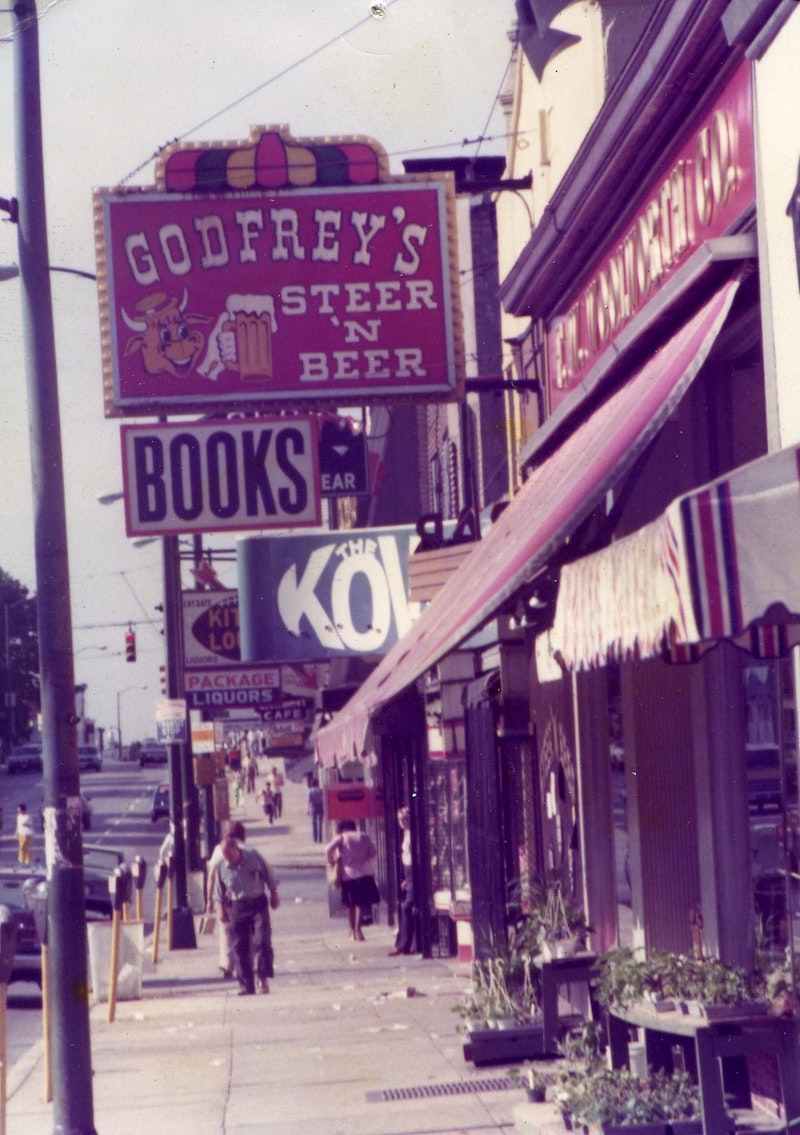 My son Booker is leaving home for his freshman year at a D.C. university in two weeks and, not surprisingly for an 18-year-old, he hasn’t done a lick of preparation. The other morning I suggested we should get on the stick this weekend and get him a trunk to store his clothes, some books, switchblade, tech gadgets, shaving paraphernalia and whatever else a young modern man possesses. He looked at me blankly and said, “What’s a trunk?” I was incredulous and reminded him of those containers in the basement that he likes to check out every six months. “Oh, I get it. Now, where do you suppose we might buy a trunk, Dad?” My wife just chuckled at our progeny’s cheeky tone, but I’m used to getting the business from him, and replied, “Well, let’s go to the local Army & Navy store,” knowing, of course, that such outlets don’t really exist anymore.

Too bad. It reminded me of when I was about his age, in college, and lived in Baltimore’s now-dilapidated neighborhood of Waverly—it was turned into a no-man’s land when the Orioles’ old Memorial Stadium was closed in favor of the Inner Harbor’s Camden Yards—and the main drag, Greenmount Ave. was my outside mall. Decent one a.m. Chinese food at the Golden Star, spaghetti and meatballs at Pecora’s, a 24-hour newsstand, the once-grand Boulevard Theater, a few hippie bookstores, a Little Tavern and Harry Little’s, and a load of bars, my favorite of which was Godfrey’s Steer ‘N’ Beer.

Back in those days, I had a lot of “locals,” but Godfrey’s couldn’t be beat for prices—quarter mugs of Pabst and $1.99 edible pizzas—and regular joe ambiance. It wasn’t a “hip” bar (there were a few of them in pre-gentrified Fells Point) or a dive where you’d see the same rummies day after day in the same seat, cigarettes burning and bumming change from any new marks walking through the door. To my mind Godfrey’s was mainstream, although that was probably a minority opinion.

It took some coaxing, but I’d get a bunch of my friends to join me there—aside from my roommates on E. 33rd St., who were, like me, impossibly cool—and it became a hangout, a place that was a lot more interesting than the campus bar that was unimaginatively called “The Rathskellar.” (Granted, this was the mid-70s when Maryland’s drinking age was temporarily 18, and having a bar a minute away from classrooms was an incalculable benefit. And also a hazard: one fall day in ’75, I’d shared two pitchers of beer with buddies and then went to a class taught by the droning Garry Wills… and fell asleep.)

A weathered lady named Shirley, who had shiny blonde hair and gruff demeanor, was the commander at Godfrey’s, barking from behind the bar, and she was someone you didn’t want to mess with. I have no idea who the owner was, but you had to earn Shirley’s trust, which took about three months, far longer than most joints. There was the occasional fistfight she had to referee, drunks to be barred, and, on occasion, the unaware tourist who wandered in asking for a top-shelf booze like Stoli, whereupon Shirley rolled her eyes, grunted, and said, “Don’t have it. Smirnoff’s or rail vodka.”

In 1975, Baltimore was just a decade removed from “whites only” establishments (even in liberal Charles Village), and the no-apologies racism was just slowly receding, but since Waverly was a comfortably integrated neighborhood, there was none of that to contend with at Godfrey’s. When I worked at Memorial Stadium, selling beer, dogs or Cokes (depending on what kind of mood my shady boss was in), after the game, cash in hand—it was strange: vendors were unionized but we got paid under the table, so no taxes—a bunch of my colleagues and I would walk the seven blocks to Godfrey’s and part with some of those wet dollars in our pockets.

Most of the vendors were black, but as I mentioned at Godfrey’s green was the only color that mattered. My hair was really long at the time, and I wore a bandana on duty, so I was predictably dubbed the “hippie vendor,” not only by my co-workers but regulars in the upper decks at the Stadium. Have to admit that it could be a little mortifying if some of my school friends were also at Godfrey’s, since I considered those guys and gals a separate sphere, and I’d take a ribbing from the vendors if I was asked about a Yeats term paper, but all that was settled when a bunch of us would go out through the back door and smoke a couple of joints in the alley. Not that Shirley approved of such shenanigans, and would give a pointed glare, but she’d seen much worse.

The jukebox wasn’t great, and you’d really have to work it to find five songs to play for half a buck. One afternoon, I really pissed off the dozen or so people at the bar when I saw that David Bowie’s new single “Golden Years” made it onto the box, and I played the song five times in a row. Couldn’t help it: the song, released prior to Station to Station, the summer after Bowie’s disco “Fame” was ubiquitous (the lone clunker on Young Americans) was an immediate knockout. Bowie with another new look, another new sound, and it blew me away.

Those countless occasions at Godfrey’s don’t often come up in my reveries—when you reach 58, there’s a lot of competition—but not long ago I found the above photo of the bar in the basement. It was in a trunk.