The government’s tricks to raise population. 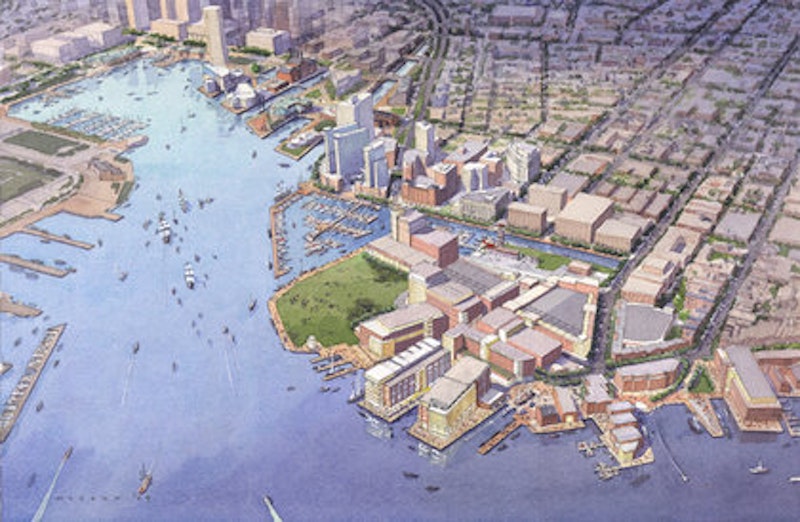 So here’s the deal. Baltimore is a city that likes to believe it’s found its groove and is on the move. But often its ministers of influence act against Baltimore’s own best interests. The city’s policies and its politics seem designed to repel people rather than attract them. “Tax” and “ban” are not the watchwords of creative governance.

Baltimore is a city of 17,000 to 40,000 vacant houses, depending on who’s doing the counting. Its population has shrunk to about 619,000, and is only that high because it won permission to include the state’s prison inmates by their home addresses. And recently, in another effort to boost its numbers, the city won a legal round that increased its head-count by another 121. Population is critical to municipal survival because many federal and state financial aid formulas are based on census counts. Yet the city continues to discourage potential residents by its foolhardy decisions. Forget about the big stuff. It’s death by nickels and dimes.

It’s an iron law of development that once government installs roads and sewer lines the malls and condos will follow. So consider, for example, the unnecessary fuss that City Council members are creating over the $100 million in TIF (Tax Increment Financing) bonds that would underwrite the infrastructure for the drawing-board development, Harbor Point (sketch, above).

As a matter of local geography, Harbor Point is a 27-acre site along Caroline St., between Fells Point and Harbor East. It’s an expansive concept that would add to the Harbor East city-within-a-city that’s a work in progress by muffin-man John Paterakis. The package would contain 1000 residential units as well as the new $50 million Exelon headquarters building for a total of 2.97 million square feet of bricks-and-mortar. (Under a TIF, the city issues bonds that the developer pays off with revenues that otherwise would be paid in property taxes.)

Paterakis has taken what was once a waterside hazardous waste dump and resuscitated it into the city’s liveliest residential, shopping and entertainment district, one of the few pockets of the city that comes alive after dark instead of shutting down. By partnering with Paterakis, the city will not only expand its portfolio but the property around the development will soar in value and in the future contribute substantially to the city’s tax base. Nothing comes between good friends like good money. City Hall is lucky that someone’s willing to take on the job.

Another case in point is the annual hootenanny over plastic bags. This season the social protest harangue, led by Councilman Brandon M. Scott, includes paper bags as well as the offending supermarket totes. Taxing them at a dime a piece will not make them disappear, as the parliament of squeaky wheels in the environmental lobby claims.

Education and public awareness are far more convincing than another burdensome levy. And frankly, merchants are doing a pretty good job on their own. They are promoting reusable bags and selling them at reasonable prices. And some stores even give a reminder and a rebate for their repeated use. Frequent shoppers, at a nickel a trip refund, can add up the return to maybe $20 a year or more for re-using a dollar shopping bag.

But for those consumers who insist on plastic bags—and they are rapidly disappearing—there is always the recycling bin at the supermarket door on a return visit. So forget about taxing bags. It’ll only drive retailers as well as customers in another direction, cursing the city all the while.

The difference between pollution and debris is in the eye of the beholder. So add to the noisemakers Councilman James Kraft, who wants to ban Styrofoam cups and carryout food containers and replace them with paper goods. Both float in Baltimore’s contaminated waterways, except that Styrofoam doesn’t degrade and disappear while paper does and eventually disintegrates and sinks. Once again, the problem calls for education and not a punitive ban. The only foam that should be banned is that which forms at the mouths of officials who preach nonsense.

So here’s a novel alternative to Kraft’s nutty ban-the-box idea. Back in the high-flying mayoral days of William Donald Schaefer, a City Hall aide, Bailey Fine, came up with a challenge to municipal litter. It was an urban hand-eye coordination street game called Trash Ball. Virtually every corner had a mesh basket labeled Trash Ball and every citizen was called upon to test their hoop skills and have some fun doing it.

The game was supported by a clever television ad campaign of Baltimoreans strutting their stuff by slam-dunking litter. Michael Jordan, Kobe Bryant and LeBron James would’ve been proud. In fact, they could be invited to demonstrate, as a civic gesture, the patriotic art of Trash Ball and even participate in new public service TV commercials. So how about a little imagination instead of another silly ban. Bring back Trash Ball.

In the stealth art of economic development, a business scouting locations has high on its check-list of must-haves a broad and deep talent pool of workers. When the City Council passed President Jack Johnson’s bill that requires firms doing business with the city to hire 51 percent of its workers from within Baltimore’s boundaries, its heart was in the right place but its head was somewhere else. Nothing discourages a business from wanting to do business than being told whom to hire and how to do the job.

The Greater Baltimore Committee fought the bill and the city solicitor warned the Council that the measure was unconstitutional. But headlines often trump reason. There are, simply put, as the Council will eventually learn, certain skills and job functions that have to be imported for lack of local availability. And, sooner or later, when the first multi-million dollar RFP goes out, a major firm will challenge the law in court and probably win. Johnson will have gotten his headline and the city will have lost time.

Another example of Baltimore’s rear-guard thinking is its attitude toward entrepreneurship. Downtown’s Tremont Hotel wants to change its flag to Embassy Suites over the city’s protests, as reported in The Sun. When the change was proposed the city was upset. The Tremont-Embassy folks were warned by the city that the change-over would put them in direct competition with the debt-laden city-owned Hilton Hotel, the one that looks as if it were designed by Albert Speer.

Which begs the question that Gov. Martin O’Malley, the former mayor, has never answered: Why is the city in the hotel business? If it’s to lose money, O’Malley picked the right venue. The hotel has never been able to pay its bills and is up to its mezzanine in debt.

Finally, the city is now engaged in bargaining session with non-profits over their fair share of the so-named rain tax. They want a pass. Yet city officials have made it a matter of policy to attract non-profits to Baltimore. Forty-two percent of the real estate in the city’s center is occupied by non-profits—churches, schools, hospitals, nursing homes, colleges, universities—that pay no taxes yet benefit from city services. And it’s a safe bet that most of the people who work for non-profits live outside the city and contribute little but lunch money to its support.

So much for Mayor Stephanie-Rawlings Blake’s fanciful notion of repopulating the city with 10,000 new residents over the next decade. Baltimore does not seem to respond to the seductive lure of if you build it, they will come. Baltimore’s closed. Somebody turn off the lights.