Baltimore Won’t Be the Next Detroit

The city’s relationship to state government has provided safeguards. 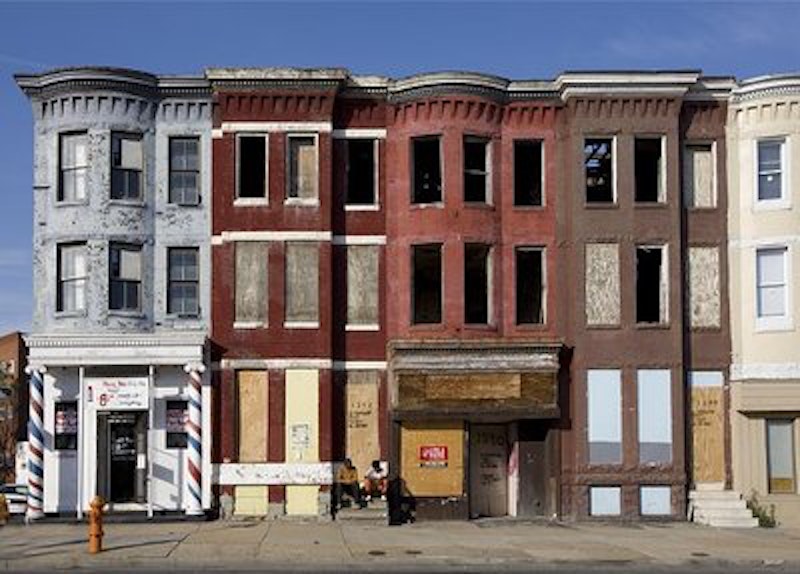 Relax, Baltimore. The city is unlikely to become another Detroit anytime soon, if ever. The largest municipal bankruptcy in the nation’s history has produced tremors across the urban landscape about which city will be next. It won’t be Baltimore.

For one thing, Maryland is a one-party state that takes care of its urban stepchild despite rural protests. Baltimore has produced a series of strong governors (and mayors), dating back to liberal Republican Theodore R. McKeldin, who’ve advanced programs and projects that provide a fiscal lifeline to the state treasury. Also, its government structure, both state and local, contain adequate safeguards to protect against a tumble into insolvency.

Comparisons suck, to roughly paraphrase Shakespeare. It’s tough to compare one state’s governance with another. But on the surface there’s enough showing to illustrate differences without having to knit-pick and quantify. Maryland, unlike Michigan, does not have a law whereby a governor can suspend its constitutional guarantees as well as an elected government and impose an unelected emergency manager with dictatorial powers on a municipality. This is what the Republican Gov. Rick Snyder, of Michigan, did to the Democratic city of Detroit.

Both cities have endured the embarrassment of profligate mayors, Kwame Kilpatrick of Detroit and Sheila Dixon of Baltimore, who ran afoul of the law. Kilpatrick was not sufficient to the challenge of governing his sinking city but Dixon was a hands-on leader who is still acknowledged for her moxie despite her misdeeds.

Detroit was once the automotive capital of the free world, the nation’s fourth largest city of two million whose population has dwindled to about 700,000. The smudges of urban blight include 70,000 abandoned houses with 11,000 cases of arson a year and 35 major fires a day. Detroit also was unable to fund essential services such as police protection and the repair of street lights. The city’s bankruptcy filing shows that Detroit is nearly $20 billion in debt, much of it in pension obligations. Detroit committed the unforgivable sin of borrowing money to pay its operating costs. Detroit was unable to reinvent itself; Baltimore has, by degrees.

Baltimore, by contrast, pays its bills and maintains a double-A bond rating, not the very best but an alphabet letter short of the state’s top rank of triple-A. Its homeowners pay the highest property tax rate in Maryland (and probably the highest water rates), double or more than any other subdivision. The city is basically supported by a half dozen neighborhoods—Guilford, Roland Park, Homeland, Mount Washington, Federal Hill and Harbor East/Fells Point/Canton.

Baltimore was once the nation’s sixth largest city with a population of nearly a million which has shrunk but has stabilized at about 620,000. One-third of its residents pay all their taxes, one-third pay some of their taxes and one-third pay no taxes. Maryland is the only state in the nation that has a property tax credit tied to income to help keep low-wage property owners in their homes. The state also provides a property tax cap for residential property owners that prevents arbitrary and run-away increases.

Renaissance and rebirth, one and the same thing, are often words used interchangeably to every so often re-christen Baltimore (as well as other down-at-the-heels municipalities.) Yet Baltimore somehow remains visibly a ward of the state, inter-connected with other local governments as well as Annapolis through an intricate web of formulas and aid programs.

Accompanying the city’s steady loss of population is its diminished representation in the General Assembly. But as its numerical presence declined, Baltimore was able to accumulate new allies and formulate new alliances, especially Prince George’s County, whose woes mirror the city’s, and Montgomery, whose liberal sensibilities lie with the less fortunate and impecunious.

There’s another quirk of municipalities that afflicts Baltimore’s revenue-raising ability. Stand at the intersection of Charles and Baltimore Sts. and measure a mile in any direction. Within those imaginary boundaries, fully 42 percent of the real estate belongs to tax-free, non-profits—hospitals, universities, churches, schools, nursing homes and government, to name a few. Only recently has the city asked non-profits to kick in some money to help pay for the services it provides for them the same as everyone else.

The state is a massive presence in Baltimore. McKeldin, who was mayor of Baltimore in the 1950s, then a two-term governor and then mayor again, tried to make Baltimore the figurative capital of Maryland. He bulldozed the heart of the city to build the state office complex on Preston St. so he could have a Baltimore office.

Gov. Marvin Mandel, in a partnership through Irv Kovens’ political clubhouse with Mayor William Donald Schaefer, paved the way for Harborplace by building the World Trade Center, the Baltimore Convention Center and the Baltimore Metro. Mandel enacted the state school construction program to ease the financial burden on local governments. And he adopted the local piggy-back tax to pump money into the subdivisions. The state also picks up the cost of teachers’ pensions.

At the same time, Schaefer sold off city assets to bring hard cash into Baltimore’s treasury. He sold Friendship Airport (now BWI-Thurgood Marshall) to the state as well as City Hospitals (now Bayview, owned and operated by the Johns Hopkins Hospital). And Schaefer sold off the city’s bus system to the state which Mandel incorporated into a single-funded state transportation system, the only state in the nation that owns and operates a unified transportation system.

This was also the golden age of the late Janet Hoffman, the city’s fiscal adviser and lobbyist in Annapolis, who, with Mandel’s winking connivance, concocted a crazy-quilt of aid formulas, such as disparity grants, impact aid and equalization formulas, to benefit the city that exist to this day. The city, for example, with help from the state spends more than $15,000 per pupil while other subdivisions spend around $10,000 (except Montgomery County at $12,000.)

Later, the Maryland Stadium Authority, which floats its own bonds, built Orioles Park at Camden Yards as well as M&T Bank Stadium, home of the Baltimore Ravens. The state took over the Lyric Theater, resuscitated the Hippodrome and supports the Baltimore Zoo as well as the Great Blacks in Wax Museum.

The state also absorbed the City Detention Center into the state prison system, now the focus of federal and state investigations. Baltimore is also the cultural center of the state and receives grants from surrounding counties to help support its museums, theaters, concert halls and other arts activities. Center Stage was reborn as a state theater with generous state subsidies.

Schaefer, as governor, encountered a growing hostility toward the city among rural legislators. He nevertheless was able to shovel money and projects into the city to the point where his administration floated the idea of establishing a self-governing state authority to oversee state assets in Baltimore. O’Malley, too, has been exceptionally generous to the city he once governed through a political alliance with Rawlings-Blake. O’Malley’s beneficence is especially noticeable in the city’s out-sized share of the state school construction program.

The University of Maryland Medical Center anchors the west side of town while the Johns Hopkins Hospital complex anchors the east, where it is rebuilding an entire swath of the city. The privately developed (with city subsidies) Harbor East is thriving and will soon expand to Fells Point with a 27-acre mixed-use project that includes 1000 houses, Harbor Point.

Agree or not, Maryland is a well-managed state as are its subdivisions. Baltimore has a strong charter, adopted and authored in the 1960s by the Charter Revision Commission’s executive director, Paul Sarbanes, later a U.S. Congressman and Senator. Unlike Detroit, Baltimore has been very conservative in its debt management. Often its appeal for state funds in Annapolis is an expressed reluctance to incur more bonded debt of its own.

Mayor Stephanie Rawlings-Blake within the past year has taken the necessary steps to reduce the city’s pension fund liability by reducing benefits and requiring city employees to increase their retirement contributions. Baltimore officials have also applied or increased taxes to offset budget shortfalls instead of borrowing, as Detroit did, to plug the holes.

The story of Baltimore’s revival and survival, as opposed to Detroit’s steady decline and fall, is a simple and oft-told tale: It pays to have friends in high places.