Eat At Bubba Gump's in Baltimore 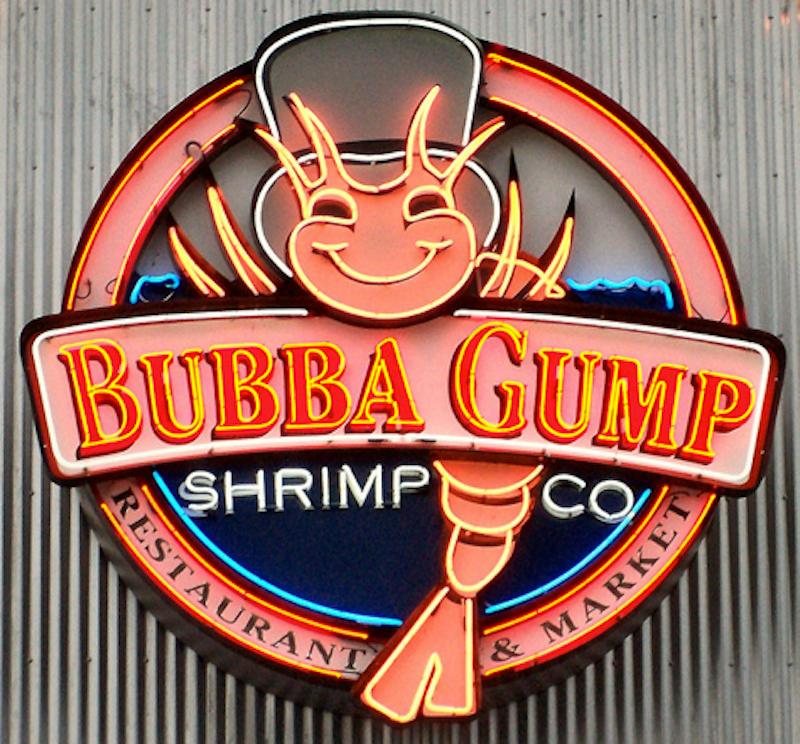 The Location: Baltimore’s Inner Harbor, in the pavilion where Phillips was situated when I was a kid, ground-level.

The View: We chose to sit outside, so the view was ideal for harbor-porn vistas and shameless people-watching alike. Also, some ingenious gardening consultant cannily outfitted the planters with a veritable rainbow of eye-catching flowers. It was great; it was like I was tripping without actually tripping.

The Hostess: Nobody this young should ever be this happy to be at work just after lunchtime. Out-of-country accent that's still bugging me because I can't even begin to place it.

The Waitress: Pretty great, attentive and concerned; actually cared when the wind blew over the license plates and my wife's water. Impossibly young. Short cropped hair, bleached, nose-ring, lanky. Actually, she reminded me a lot of Syd that Kyd from The Internet in the "Cocaine" video, only more giggly; it took every ounce of self-control in my being to not mention this, seriously.

The Appetizer: Garlic bread, extra garlic-y, with lots of butter. What if you had some weird visual condition that made clear yellow liquids appear a cloudy, dark red, and you stumbled upon me stuffing my face with this garlic bread, butter dripping down to my chin? You'd probably think I was some sort of garlic bread vampire.

The Cover-up: My father-in-law observed that hand and arm stockings were in full effect on various employees, and theorized that their purpose was to obscure tattoos. Which seems plausible, but also eminently stupid because, well, everyone has tattoos these days. Like, just about everywhere I go these days, so many people have tattoos that I feel like a freak because I haven't bothered to get one. I would guarantee that 50 to 60 percent of Bubba Gump Shrimp Co. patrons have a tat of a constellation of pink stars or Japanese calligraphy or a loved one's name or a botched smudge acquired while behind bars.

The Gimmicks: So many, and there had to be. "Run, Forrest, Run" was there in various manifestations, hat-tips to Lt. Dan were everywhere. Plenty of seafood to be had, naturally, if not a trillion shrimp permutations.

The Meal: I opted for the most boring, obvious entree one could go for while in Maryland: the Maryland Crab Cake, which consisted of the cake, plus tomato, lettuce, a bun, and remoulade dipping sauce. And it was good; don't get me wrong, I'm not mad at it, or at the Bubba Gump chefs, or western culinary culture, but this is one of those times when I wish the figurative American palette wasn't so bloody weak-kneed and squeamish, then it could hold its own in the face of a complex array of spices and preparation. Also, the next time I go for some crabs, I'm making them soft-shelled crabs. Oh, and the fries kicked ass.

Other People's Meals: My wife raved about her chicken Caesar salad, from the preparation to the flavor. I can't remember what my father-in-law had but he seemed pleased. Nodin had no complaints about the macaroni and cheese and French Fries he devoured, but we all agreed that his blue Jell-O was almost obscenely sweet.

The Drink: Watermelon lemonade, a conceptually awesome idea. The downside: this idea is so awesome that in practice it was bound to disappoint. The upside: the watermelon lemonade served by the Bubba Gump Shrimp Co. is as satisfying as one can expect from mass-produced watermelon lemonade, a swirling eddy of flavor that is the taste equivalent of a sparrow's unimpeachable early morning song. You kind of can't ever believe that someone came up with this concoction and that you're drinking one outside in a tall, "vintage" novelty glass you get to take home (it turns out), with flashing LEDs set in the base, hoping that somehow you never run out of watermelon lemonade, and then you do, and no one offers you any more. And then later you pledge that someday you will make your own wild, spiked watermelon lemonade at home, gallons of it, just for you.

The Other Drink: It was water. It was okay.

The Expense: Pretty expensive, but nowhere as expensive as Phillips was. I mean, I had a projection as to what the total bill would be, and I was about $15 too low; usually I'm within a $5 range, so that was a surprise.

The Bubba Gump Gift Shop: I dunno; we didn't buy anything in there.