And it's full of leaks, too. 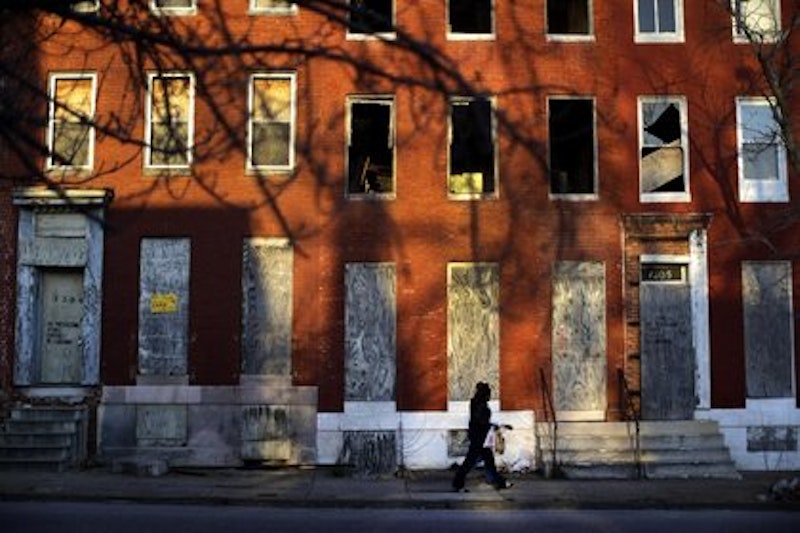 Baltimore City just got punked. It was named America’s 27th most dangerous city by NeighborthoodScout.com. That’s a serious blow to civic pride. Baltimore used to be number one, ahead of even Detroit and the District of Columbia. Now Baltimore’s trailing Palookavilles such as York, PA (18th) and East St. Louis, Ill.(1st). The city’s even behind chemistry’s company town, Wilmington, Del. (17th).

In the ranking of cities, even Philadelphia (50th) and the District of Columbia (46th) are classified as safer cities than Baltimore. Baltimore used to be way more dangerous than both. Still, Baltimore’s one notch safer than Atlanta, GA (26th) and two better than Birmingham, Ala. (25th). And just in case you’re wondering, and you are, the safest city in America’s top 100 is Sarasota, Fla. (100th), just south of Tampa, winter home of the Ringling Bros. circus.

But not to worry. Baltimore still retains some records and recognition. Only recently the Department of Justice named the city’s jail as the second highest in the nation for the rate of sex within its prison walls. The priapic activity was discovered during a lengthy FBI investigation that found four female guards had been impregnated by a single inmate who ran the prison by controlling the flow of sexual favors, drugs, cell phones and other comforts usually associated with the outside world. He has since been relocated to another prison where he has complained about the austere conditions.

But the diaspora that’s taken place and the loss of population has cost Baltimore a few brass nameplates on several national honor rolls. The city’s population is now officially down to 619,493 from its high of nearly a million in the 1960s. The city is still number one, though, on the amount of money its school system spends on each pupil, around $15,500, tied with uppity Montgomery County. The city still has the highest property tax rate in the state, double that of any other subdivision. And if the trend continues, Baltimore will no doubt have the highest water rates in the nation.

The rankings by Neighborhood Scout are based on cities with populations of 25,000 or more and the number of crimes per 1000 people—murder, rape, armed robbery and aggravated assault—as reported to the FBI. According to their posted numbers, there were 196 murders, 341 rapes, 3489 robberies and 4918 assaults in Baltimore as well as 8658 burglaries, 17,566 thefts and 4241 motor vehicle thefts. Live in Baltimore and you play the percentages. The chances of being a crime victim in Baltimore? One in 69.

The newspaper you read over breakfast this morning probably contained a half dozen stories that were based on leaks. Those of a certain age and memory capacity in Maryland can empathize with the creepy chill over the Obama Administration’s relentless pursuit of leaks and leakers involving journalists and their sources. Maryland, for more than three decades, had a similar obsession as well as its own legal dirty-tricks operation to enforce it. It was called the Ober Commission.

The Ober Commission, named after its General Assembly sponsor, was enacted during the anti-communist hysteria of the McCarthy era, circa the early 1950s during the governorship of either William Preston Lane (D) or Theodore R. McKeldin (R). It survived into the 1970s when it was finally repealed during the administration Gov. Marvin Mandel (D), under pressure from civil libertarians, as a useless throwback to a dark era in America politics.

The stated purpose of the Ober Commission was to gather information on persons suspected of being communists or having communist leanings or sympathies or otherwise subversive. And without specific language or direction in the law, the Ober Commission also extended its reach and kept files on journalists, mostly clips of stories they had written. That dirty little secret had been revealed during numerous unsuccessful attempts to repeal the law and abolish the commission.

The Ober Commission, probably unknown to many citizens, was quietly hidden in the office of the Maryland attorney general and under the jurisdiction of one of the many assistant attorneys general. At one time the dubious assignment was the province of the late Peter O’Malley, the supreme political boss of Prince George’s County who, during his rise to power, had been a patronage appointee as an assistant attorney general. The vaguest recollection is that no one was ever prosecuted through action by the Ober Commission.

Another example of investigative subterfuge was Spiro T. Agnew’s hostility toward reporters long before he was vice president when he described journalists as “effete snobs.” As governor of Maryland and a vice presidential candidate, he took action against one local kick-ass reporter who shall remain nameless to protect a leaker.

After the final airborne lap of his vice presidential campaign, Agnew was to return home to a rousing victory welcome at Towson State University that had been arranged by his local supporters. The reporter was told by a faculty adviser and source that a local campus chapter of the Students for a Democratic Society, in 1968 considered a dangerous left-wing campus organization (composed mainly of teen-agers), planned to stage a counter demonstration to the Agnew Rally.

The reporter wrote a story. Agnew was enraged that his homecoming would be disrupted. He ordered State Sen. Jack Bishop (R) to conduct an investigation into “the communist sympathies” of the reporter. A couple of weeks later the reporter saw Bishop.

“Hi, Jack,” the reporter said. “What did you find out?” Bishop smiled. He had done nothing.

But the most egregious example of official over-reach was committed by the Baltimore Police Department’s ISD (Inspectional Services Division) under Commissioner Donald D. Pomerleau (1966-81), a former Marine colonel and fierce anti-communist. The ISD’s infiltration and investigation of demonstrators as well as elected officials lead to a full-blown investigation by the General Assembly into the ISD and Pomerleu’s defiant refusal to turn over secret records to legislative committees.

In 1976, the Maryland Senate issued a report stating that Pomerleau “had used illegal spying methods, including wiretapping, surveillance and illicit acquisition of credit reports.” Pomerleau had been accused of spying on members of Police Local 1195 “for purposes of union busting.” Pomerleau countered by saying “spying was a necessary counter-measure against subversive elements” in his department.

Journalists also reported that Pomerleau intimidated them by using information obtained through his spy network. Michael Olesker, a columnist for The Baltimore Sun, wrote about a meeting with Pomerleau in the mid-1970s: “Listen,” Pomerleau said, “I know where you’ve been. I know who you’ve talked to. And I know what you’ve been told.” To which Olekser appended, “And he did.”

The lists of those under surveillance as well as others suspected of subversive activities contained the names of well-known activist groups of the civil rights and anti-war demonstration era in addition a number of elected officials who were engaged in what were considered at the time acts of civil disobedience.

Yet Pomerleau thought nothing of his own disobedience by defying a committee of the General Assembly. In those days, the Baltimore police commissioner was appointed by and reported to the governor. Pomerleau gave the sensitive list to Gov. Marvin Mandel to do with as he chose, including presenting it to the General Assembly. Mandel handed the list to an aide without opening the sealed envelope and said, “Get rid of this.” The ISD unit was eventually disbanded.