Adam Jones Extension is a Good Start for the Orioles

But more roster upgrades are essential 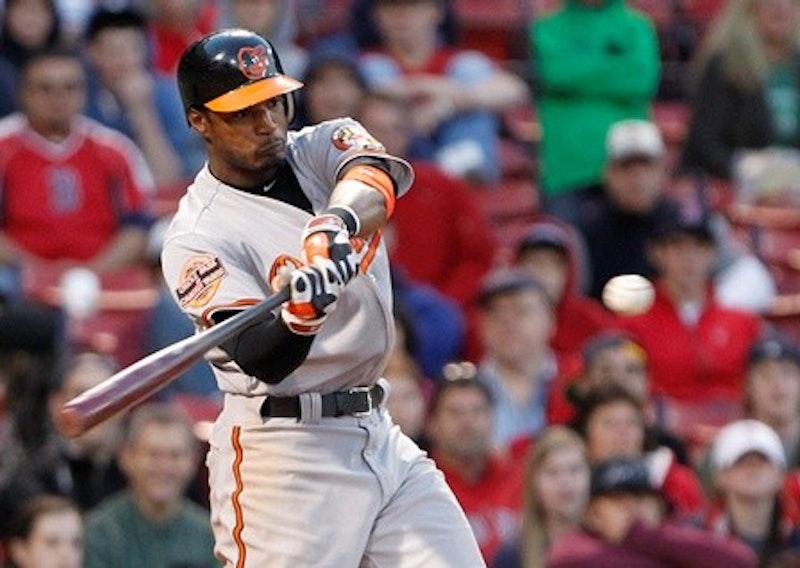 I was stunned on my way into work last Friday as Baltimore sports talk radio was abuzz with the rumor that Adam Jones and the Orioles were working on a long-term contract extension. I was resigned to the thought that Jones would be traded prior to the start of the 2013 season, his last year of arbitration eligibility. I joked with friends that the O’s hot start was nice but Jones and catcher Matt Wieters were already being fitted for their Yankee pinstripes. By Saturday afternoon the Orioles had proven me wrong and agreed with Jones on a six-year extension in the neighborhood of $90 million. I was never happier to eat crow.

The Jones signing set off a hailstorm of hyperbole among Baltimore media outlets. Some called it the most significant contract in franchise history; others said it was a necessity for the Orioles to sign Jones; and the most jaded quickly looked past Jones and immediately started complaining that the team hadn’t signed Wieters to an extension as well. You can’t make all of the people happy all of the time, but the Orioles hadn’t made anyone happy for 14 years. The team and its much maligned ownership group should be commended for doing what was necessary to lock up a very good player to a long-term deal. Jones isn’t a great player. He still struggles with strike zone judgment and is prone to losing focus on defense. He’s also the best player on the Orioles’ roster.

Baltimore acquired Jones from the Mariners in the Erik Bedard trade in February of 2008. Jones has progressed from a raw prospect into a Gold Glove winner, All-Star, and now the team’s cleanup hitter. Signing Jones wasn’t a necessity for the Orioles. The team has disenfranchised so many fans over the years that dealing away a popular player like Jones likely would have had little impact on attendance. Critics of the deal, and there are some, contend that the Orioles would’ve been better off trading Jones for pitching prospects and using the money they gave to Jones to chase free agents in the off season. The problem with that suggestion is that the Orioles don’t chase free agents, and free agents generally have little interest in the resident doormat of the AL East. The Orioles have been stockpiling MASN cash for years.

The signing of Jones was a significant first step on the long road the Orioles must travel in their effort to return to respectability. By inking Jones the Orioles have effectively signaled their return to the Major Leagues. The best way to become a good team is to keep your best players and add reinforcements. Trading Jones now, after spending four years developing him into the player he’s become, would’ve been a step back for Baltimore.

Jones is a flawed player. The 2012 Orioles are a flawed team. The investment the organization made in Jones must now be followed up by additional investments in player development and talent acquisition. Sure, signing Wieters to an extension would be nice but he’s under team control for another three seasons. How about a trade for Zach Greinke or Ryan Dempster to help the struggling rotation? Dylan Bundy and Manny Machado are superb prospects, but they won’t solve the team’s long-standing issues in left field or at third base. The Jones extension was the first of what must be many more investments in on-field upgrades to turn the Orioles from the feel-good story of May 2012 into a legitimate year-in/year-out contender. If the Jones signing isn’t followed with significant upgrades to the rotation, left field, third base, player development, and a long term pact with Wieters then the Orioles will find themselves lighter in the pocket and back in the cellar.