An interview with Ronin Wood and Matthew Thompson of Time Spent. 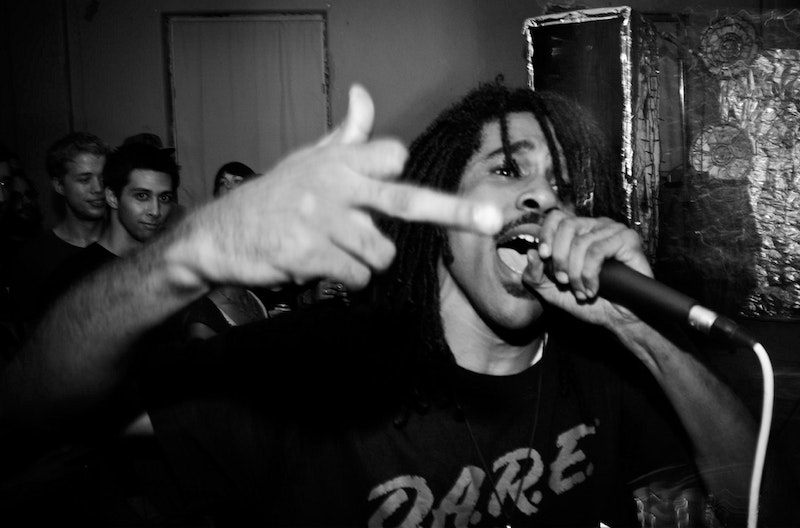 Near the intersection of North and Linden Aves., fixed above a run-down strip mall, a billboard advertises "www.TIMESPENT.biz/RAP ONLY/NO BEAT, NO HOOK, NO MUSIC, NO CUTS." At least for the next week. The billboard is the result of a recent Kickstarter campaign by Ronin Wood and Matthew Thompson, two MICA students with a decidedly low-tech approach to music videos. Equipped with nothing but a used VHS camera, a 100-foot extension cord and a desk lamp, Wood and Thompson have, for the past year, been filming rappers in and around Baltimore. The website lays out the rules: all raps must be exclusive to Time Spent and must be performed without backing or accompaniment; all videos must be one take, with editing limited to the addition of post-production credits. Their goal: to promote local rap through its most basic power, its rhythm and its poetry.

Yet Wood and Thompson weren't so ambitious to start. Wood had bought the camera on a lark. Jonathan Trundle, a former MICA photography professor, had offered it to him for $100. Not thinking he had much use for a 20-year-old VHS camera, Wood declined. But Trundle was insistent. After some haggling, the two agreed on $50 with a VCR thrown in (the VCR, it turned out, didn't work).

Eager to try out the camera, Wood enlisted Thompson's help and emailed Zaiah Burke, a young rapper from Hampton, Virginia whom Wood had recently done some graphic design work for. Burke was enthusiastic. Thompson, however, was hesitant. "I hate rap videos," he told me. "When Ronin said, 'let's do a video,' I told him I didn't want to do anything that looked like a rap video." The now-clichéd rap video pioneered by 90s icons like Hype Williams—featuring expensive cars and clothes, bikini-clad women, pool-side mansions—both Wood and Thompson hate this stuff. They admire Kanye's recent work, including his 35-minute short film for "Runaway," even if they don't like the actual videos. "The fact that he's trying to do something different," Wood says, "that's really almost enough." And they tell me about BBGun, a New York-based film company that's done some one-take experimental videos for Asher Roth and J. Cole.

For Time Spent, they credit both the Black Cab Sessions, a music blog devoted to filming performances in the back of a London taxi, as well as an older clip from YouTube, part of a short compilation from the now-defunct graffiti magazine On The Go, featuring freestyle from Black Thought and Questlove of The Roots. Wood explains: "Questlove is beatboxing while Black Thought freestyles, and they're in some alley and there's a guy doing graffiti, but the amazing part is Questlove will just say something random, like all of a sudden he'll just point to the graffiti and say 'BLUE!' and Black Thought will incorporate it into his rap… That video's just so perfect."

Wood and Johnson acknowledge that the amateur, retro aesthetic of Time Spent may turn some viewers off. In fact, this is partly the point. "Rap music is just too HD right now," Wood says. "All the videos are just so clean, and there just doesn't seem to be any reason for them to be that clean. It's boring." "We don't want to do anything that's going to bring the viewer in," Thompson adds. Both have a basic distrust of anything overtly commercial. Songs with too much radio play, or too many repeat showings on MTV or BET, suggest a sort of corporate rigging, where any song, no matter how bad, can top the charts if it has enough money backing it.

Thompson offers Selena Gomez's "Love You Like a Love Song" as an example. "It's a terrible song, awful lyrics. The drum beat is just boom-tap, boom-tap but all-together it's just the most professionally well-crafted, mathematically-perfect pop song, and I love it—and not ironically or anything. I'm just giving in to what pop music is supposed to do, you know, to just catch you with that hook."

That Gomez can top the charts while someone like Zaiah Burke may never play to a crowd of more than 50 or 100 is something Wood and Thompson would like to fix. "That's really why we got the billboard," Wood says. "When we realized all these rappers had day jobs—it's just sad, you know? The fact that they can't make a living through their music." And the videos, Wood says, are just the start. He's working on a Time Spent zine, and there’s talk of an EP. "I remember, early on, we were emailing all these rappers, guys like Rap Dragons, and thinking, 'They're never going to email us back.' But no one has said no. The support we've gotten… it's been great."