PeeGee Goes All In

The fight to build a sixth casino on the banks of the Potomac will have repercussions throughout Maryland, D.C. and Virginia. 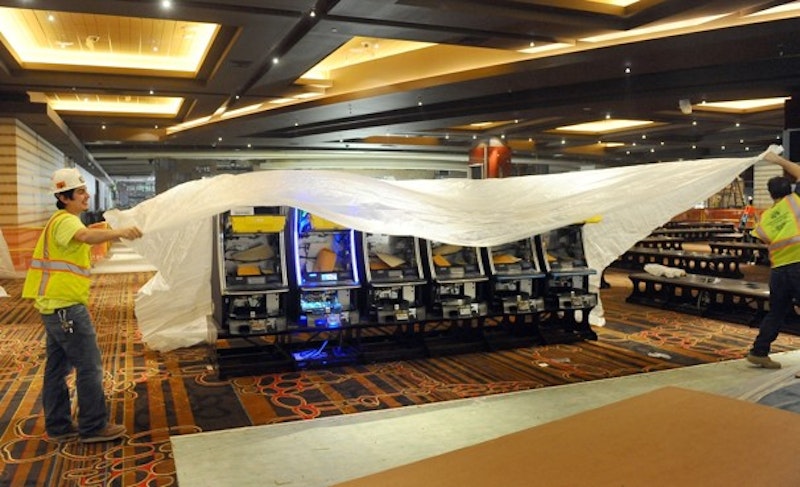 Something happened. For years, the developers of National Harbor, on the Maryland banks of the Potomac, opposed state-sponsored gambling in Prince George’s County for reasons of economic self-interest and fundamentalist religious beliefs. Now, with no cogent explanation, they have reversed positions and are ready to spend $1 billion, so they say, on a gaudy gambling empire with a three-state draw that would upset the casino balance in Maryland by adding 4750 more slot machines.

The National Harbor developers, the Peterson Companies and Gaylord Properties, along with PeeGee lawmakers, resisted converting nearby Rosecroft Raceway into a gambling emporium, or “Racino” as the dual facilities are called in the trade, out of fear that competing hotels and motels would spring up at the site of the gambling action. And they fought off another developer who proposed establishing a poker parlor at the rundown race track. The other face of the opposition was the owner of Gaylord Properties, a Tennessee conglomerate and a hotel owner at National Harbor, an evangelical Christian who is opposed to gambling.

Now, the Peterson Companies, headed by Milton Peterson and headquartered in Fairfax, VA, is going full blast to establish a casino at National Harbor, the religious sensibilities of his hotel partner notwithstanding. Peterson has virtually eclipsed all the competition, including Penn National, which purchased Rosecroft, in the battle to add a sixth casino in Maryland with table games as a hefty bonus. The National Harbor site is favored by Senate President Thomas V. Mike Miller (D-Calvert) and PeeGee County Executive Rushern Baker (D). Penn National is a publicly traded company whose every financial move is subject to scrutiny. The Peterson Companies are privately held.

It was Miller, in fact, who bollixed the regular 90-day session climax by manipulating the Senate agenda to place slots legislation ahead of the tax measure that was required to balance the budget. Both failed. Miller’s heavy hand and manic insistence on slots lead to the recent special session to enact the tax increases and another, scheduled for the week of July 9th, to consider his cherished gambling bill, a compromise brokered by Gov. Martin O’Malley (D) as a way of getting his tax increases on high wage earners. The rush is necessary, according to Miller, to place the constitutional amendment on the ballot in November or it otherwise would be delayed until 2014. Ballot questions can appear only in statewide general elections.

Students of human motivation would be challenged to discern what makes Miller’s febrile brain tick other than another gambling parlor broadens his fundraising base. Among the largest aggregators of campaign funds for Miller are the trades unions, lawyers and lobbyists and gambling and casino interests, according to Ballotpedia, which tracks state legislative campaign contributions. But that may be only what shows at first glance. Miller is known as the pioneer of the so-called “godfather” accounts through which he raises funds to underwrite the campaigns of friendly legislators and candidates, solidifying his control of the Senate through financial dependency.

Long the legislature’s champion of legalized gambling, Miller has the usual camouflage of talking points in this case—building a sixth casino will generate jobs, increase state revenue and help fund a new $600 million teaching hospital in PeeGee, a priority of Baker’s. The last point may now be problematical. The University of Maryland Medical Systems had offered to help develop and run a new hospital in PeeGee. But it has since entered negotiations to take over the troubled St. Joseph’s Hospital in Baltimore and it is doubtful that they can undertake both.

Nonetheless, Miller’s interest in casinos runs deep, so deep that he even partnered with Republican Gov. Robert L. Ehrlich Jr. to unsuccessfully pursue the issue. During the past 90-day session, at least eight of the top lobbyists working on the gambling issue were former legislative aides to Miller, Maryland’s longest serving Senate president.

But Miller, more often than not, has met his match in House Speaker Michael Busch (D-Anne Arundel). During the Ehrlich years, Busch, through his muscular grip on the House, blocked slots legislation at every turn. And it was only after O’Malley became governor that the issue was finally approved and sent to the voters and ratified. And again this year, Busch has shown that he has little enthusiasm for broadening gambling in Maryland. He would have none of it during the regular legislative session.

To set the stage for the July session, a cohort of legislators and staffers called “The Work Group to Consider Gaming Expansion” has been appointed to do just that. It is headed by businessman John Morton lll and, as study groups go, is stacked to reflect the views of the responsbile parties, Miller, Busch and O’Malley. As mayor of Baltimore and in his early days as governor, O’Malley had always resisted slot machine gambling and pointedly blocked considerations to locate a casino in the city’s Inner Harbor. O’Malley, perhaps out of frustration, recently told the editors of The Washington Post that slot machine gambling “is a piss poor way” to finance government. To that point, the pencilnecks retained by the state have been woefully inadequate and inaccurate in projecting revenues from slot machines, consistently over-stating the take.

The work group will consider not only whether to expand the number of casinos but also whether to add table games to the menu as well as how to compensate the other five franchise holders. Baltimore Mayor Stephanie-Rawlings Blake supports adding table games as the move would enhance revenue at the proposed Baltimore slots location. The sweetener of table games also has drawn support for the National Harbor location from an unlikely source, Caesar’s, which is seeking the Baltimore franchise. The special session is contingent upon the group reaching a consensus on the issues before it.
The group will also consider whether to turn over actual ownership of slot machines from the state to the casino owners.

That last consideration could cause an uproar as well as a point of defeat for any potential legislation. Under the current arrangement, the state owns the slot machines at each casino location. And because their purchase is a state contract, it must contain a 25 percent minority participation portion of the overall value of the contact. If the machines are turned over to private ownership, there is then no obligation whatsoever to include minority participation in the lucrative contracts. Each machine is estimated to cost about $11,000. The new casino would have 4750 machines. You do the math. There 44 black members of the General Assembly and PeeGee is 73 percent black.

The fight over a casino at National Harbor involves two bare-knuckle businessmen who are used to getting what they want—Milton Peterson and David Cordish, principal of the Cordish Companies in Baltimore. Cordish has already built a casino with 4750 slot machines, Maryland Live!, at Arundel Mills, which is scheduled to open in June.

Cordish claims that an additional casino at National Harbor would cut into his proceeds as well as his client base and was not in the mix when he won a tough fight against the Maryland Jockey Club to build the casino in Anne Arundel County. National Harbor, on the Maryland side of the Woodrow Wilson Bridge, straddles Maryland, Virginia and the District of Columbia, a populous triangle that hosts among the highest income earners in the nation with a good chunk of recreational dollars.

Hence, Miller’s placating gesture to compensate other franchise holders for any fall-off in revenue if a sixth casino were to be built. The third party involved is also a willful master of the gambling universe, Peter Carlino, CEO of Penn National, which operates Hollywood Casino in Cecil County and owns Rosecroft. Carlino takes no prisoners. Current Maryland law allows only one gambling franchise per owner, a change in the law Carlino no doubt had in mind when his company, the wealthiest gambling operation in America, bought Rosecroft.

Individuals familiar with the casino industry say the Peterson claim of a $1 billion gambling facility, which would include a 4000 space garage, is a lot of hot air. At that cost, they say, under the Maryland financial distribution formula, there is no chance that Peterson could ever recover his investment.

The special session, if it occurs, will no doubt be limited in time and the number of issues it will consider, principally the expansion of gambling and tweaking the Maryland Court of Appeals by restoring legitimacy to the breed of dogs known as “Pit Bulls.” Individuals with a penchant for betting should hedge their wagers on the passage of legislation adding a casino and put all of their money down on the enactment of the pet-owners bill. It’s a sure thing.