Roster Crunch on the Orioles' Horizon

Time to fix the mound and third base. 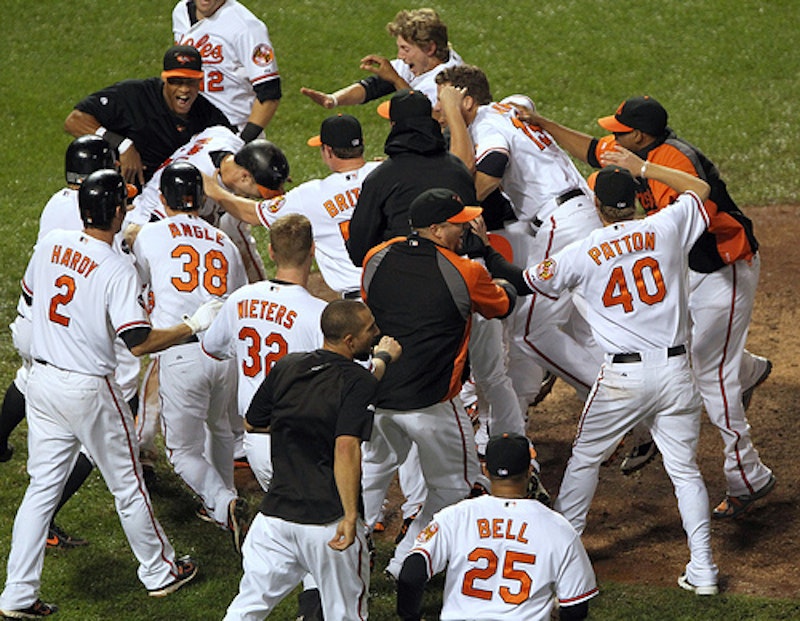 The Baltimore Orioles are flying high atop the American League East. It’s thrilling as well as shocking. I certainly didn't see this coming but will take it without complaint. The Orioles are moving to the point in the season that separates surprising upstarts from real contenders. The team will likely need to improve its starting pitching depth to make a serious run at the postseason. The news of Zach Britton beginning a minor league rehab assignment is music to the ears of O's fans. The speculation that free agent right-hander Roy Oswalt could soon join the squad seems too good to be true. In addition to starting pitching the Orioles' biggest question mark remains third base.

Mark Reynolds started the season as the everyday third baseman. Apparently "everyday" was defined rather loosely. That scenario lasted all of about three days before manager Buck Showalter once again tired of Reynolds' horrendous defense and began shuffling players through the hot corner. Showalter has started Reynolds, Wilson Betemit, Ryan Flaherty, and Steve Tolleson at third base. The quartet has combined to commit 14 errors in 45 games. Rule 5 draftee Flaherty, who has started five games at third without making an error, is the closest thing the current O's have to Brooks Robinson. Hell, Leo Gomez would be a sight for sore eyes these days.

The Orioles are about to face a roster crunch. Reynolds will soon be back from his stay on the 15-day disabled list. Miguel Tejada, who was signed a few weeks back as another option at third base, is currently playing in Triple-A Norfolk. Tejada once signed a $72 million contract to join the Orioles. He won't be toiling in Norfolk for much longer before expecting a call to the big leagues. Brian Roberts, who's been out for more than a year with post concussion symptoms, has finally started a minor league rehab assignment. Outfielders Nolan Reimold and Endy Chavez may also be set to re-join the active roster in the coming weeks.

Showalter and GM Dan Duquette have some tough choices to make. The team currently has three players (Reynolds, Betemit, and Nick Johnson) whose best position is designated hitter. If Roberts is able to play second base on a regular basis it would allow the club to move Robert Andino to third base. Andino doesn't have the offensive profile of a typical third baseman, but at this point Showalter just needs someone who can consistently field the ball. Flaherty has been like a Swiss Army knife for the Orioles, playing six defensive positions, providing late inning defense, and also pinch running. The problem is that the rookie looks overmatched at the plate and the team may not be able to justify carrying him on the 25-man roster of a contending ball club. Tolleson has played well in limited duty, contributing a two-run homer in last Tuesday's victory over the Red Sox. Unfortunately he's a career journeyman who could find himself back in Norfolk when Reynolds returns.

These things generally have a way of sorting themselves out. Roberts is only a few days into his rehab assignment. The team is cautiously optimistic regarding his return but another setback wouldn't be a shock to anyone. The Orioles should try to work out a trade with the Cubs to keep Flaherty in the organization. A few weeks ago Nick Johnson looked like a trip to the Atlantic League was in his near future, but he's caught fire in May after a hitless April. Johnson's history of injuries could re-surface and land him on the DL at any moment but for now he looks like a keeper. My guess is that Reynolds, once activated, and Johnson will platoon at DH. A healthy Brian Roberts would play second base four to five times a week with Andino as the understudy. The switch-hitting Betemit could play third against righties. Andino would man the hot corner against left-handers and sub in for late inning defense on the days he doesn't start. Tejada could be the odd man out. I'd love to see Miggy return to be a part of a winning team in Baltimore but if everyone else is healthy there just may not be any room at the inn for the former All-Star.

Regardless of how it shakes out, the roster juggling of Duquette and Showalter will be an interesting subplot in the coming weeks. The duo certainly has not been shy about making roster moves. Duquette has clearly opted for a quantity over quality strategy in his first season in Baltimore but he's given Showalter options, something the skipper sorely lacked last season.