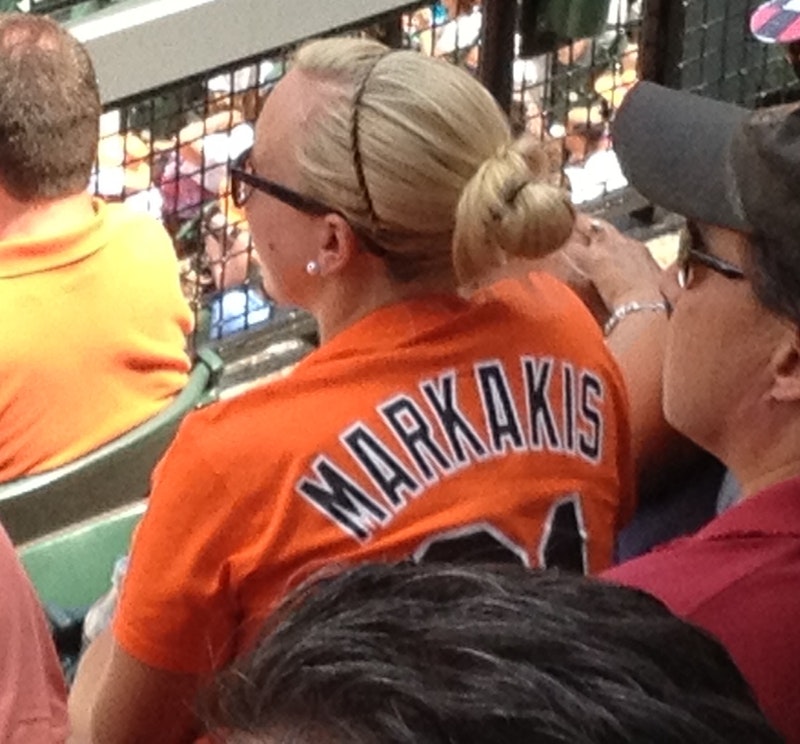 It was 80 degrees in Baltimore yesterday, the first Sunday this year when the Orioles were playing at home when the weather was more than sufficient for the family and I to fill four seats in section 246 at Camden Yards. The O’s are playing inspired baseball, and though I suspect it’s a one-in-five-year tease that the team offers to this sports-obsessed town, the A.L. East standings don’t lie: Baltimore’s in first place, with a 22-13 record. Yet, until very recently, the park has been mostly empty, which just whets the perennial hope that octogenarian owner Peter Angelos will sell the franchise, especially since the recent $2.1 billion sale of the Dodgers has automatically added several hundred millions to the value of teams that are located in reasonably fan-friendly cities.

What I didn’t expect—especially after just over 11,000 people showed up for an O’s/Rangers game early last week—when we arrived at 1:15 was the eye-blinking scene in front of the stadium, with the color orange everywhere you looked. The walk-up sprawl for tickets was more reminiscent of Fenway Park than Camden Yards, and the line for ticket-holders to get inside stretched almost back to one of the sports bars across the street. According to the Baltimore Sun, the crowd numbered 29,552, the day after the same Tampa Bay Rays brought out over 32,000 spectators. Once in our seats, looking around, I’ve never, in nine years of regularly watching games at Camden Yards seen so many Orioles players’ t-shirts, with stars Matt Wieters and Nick Markakis the most popular among them.

As it happened, the O’s couldn’t pull off a sweep against the Rays (whom they’d improbably defeated on Friday and Saturday nights), but after trailing 7-1, the club rallied to give Joe Maddon’s squad a case of night frights, coming up short in the bottom of the 9th, succumbing by a score of 9-8. You can’t blame the Orioles for a wave of giddiness: players like Wieters, the All-Star catcher, have never experienced what was once, last century, called “Orioles Magic.” Wieters, not exactly Mr. Eloquent—at least not in an Ozzie Guillen way—spoke to a Sun reporter after the game. He said: “This team never gives up. We had a chance in the ninth and just didn’t come through. It would have been a nice game to win, but at the same time you this team is going to keep playing hard and we’re not out of any game. That’s how we feel in the clubhouse.”

As noted many times in this space, I’m a Red Sox fan and so I had one eye trained on the out-of-town scoreboard in right field and was relieved to see that the Sox, this year’s dysfunctional team of record, was romping to a win over the Indians, with the bonus that the Yankees lost to Seattle. And, risking accusations of mean-spiritedness, I was rooting hard for the O’s to smash the Rays, figuring that Baltimore, come the middle of the season, won’t be in the hunt for a playoff spot, and that any game the Rays lose is a benefit to Boston. Nevertheless, I do live in Baltimore City and any time the O’s can put together a sustained winning streak is fine by me: it puts citizens in a good mood (including my wife, who strays from the family Bosox fanaticism in favor of the O’s), boosts business downtown, and maybe presages a time when the Orioles will actually be a year-in, year-out contender to play in October.