But can they top the AL East once again? 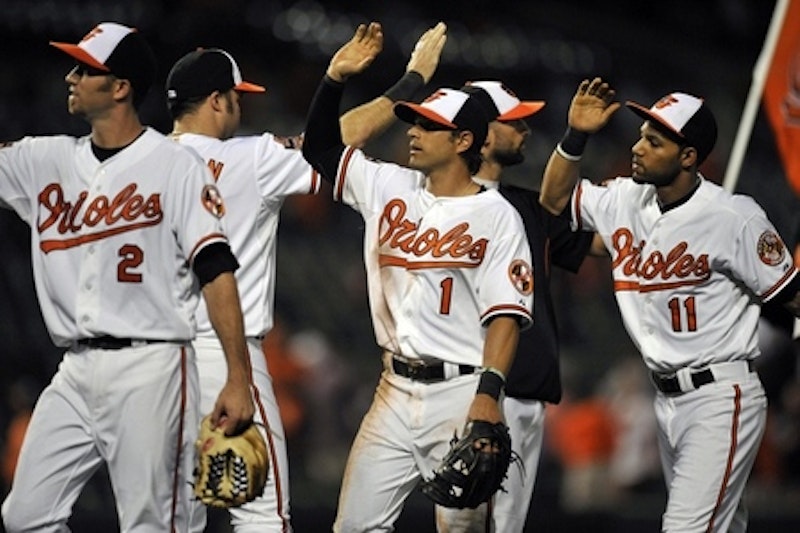 On Tuesday night Baltimore’s second baseman Brian Roberts played his first Major League game in nearly 13 months. After months of battling post-concussion symptoms, Roberts, and his oversized double-flap batting helmet, was back in his rightful spot atop the Orioles’ lineup. A few months ago Roberts looked like a player who may never play again for a team that didn’t figure to matter much anyway. Now, he’s suddenly an important mid-season addition to an American League contender.

Roberts deserves commendation for the work he put in to get himself back on the field. In Spring Training I had serious doubts about Roberts’ big league future. His concussion issues came on the heels of a back injury that cost him most of the 2010 season. The Orioles still owed him $20 million for the 2012 and 2013 seasons. Roberts could have easily put in his rehab work and collected his paycheck.

A lot of people around town have labeled Roberts as soft, and questioned his desire. The issue with brain injuries is that there’s no cast or unsightly scar to remind outsiders of the pain and rehabilitation. To many people Roberts looked fine which meant he was milking it. He’s not limping, why can’t he play? I can’t comprehend the kind of pain and frustration Roberts must have dealt with over the past year. I do know that the one thing he’s done well and been paid handsomely for is his ability to play baseball at a high level and having that ability taken away had to be terribly disheartening.

I’m no Roberts apologist. I think he’s been largely overrated during his time in Baltimore. He was a pretty good player who achieved near rock star status around town because he played on a team full of crappy players. Nick Markakis followed soon after and became Roberts 2.0.; another solid player overrated by a long-suffering baseball town looking for any sign of hope. Roberts was also treated with kid gloves after the Mitchell Report revelation that he used performance-enhancing drugs. Roberts did a couple of fluffy local radio interviews declaring that he only tried it once. Sure you did, Brian.

All those things, just like the Orioles’ 14 consecutive losing seasons, are in the past. The only thing that really matters at this point is how Roberts plays going forward and the kind of impact he has on Baltimore’s season. He instantly gives the Orioles credibility at the top of the order. Since the neck injury to Nolan Reimold, O’s manager Buck Showalter had been forced to use ill-fitting parts like Endy Chavez, Robert Andino and Ryan Flaherty in the leadoff spot. Andino has slumped badly over the past month and his OBP for the season is .298. Roberts’ career OBP is .353. Roberts also figures to give the Orioles improved defense at second base. Andino is a solid utility player but his warts have been exposed due to the increased playing time he’s received in Roberts’ absence: he’s already made nine errors in 56 games. The return of Roberts allows Showalter to use Andino as a replacement late in games for defensively-challenged third baseman Wilson Betemit. Of course, all of this is predicated on Roberts staying healthy.

The Orioles have answered their doubters, including me, all season long and bounced back from an extended losing streak that had many Baltimore faithful pulling their Ravens’ gear out of storage. Despite all of their warts, question marks, and negative run differential the Orioles are currently one game behind the first place Yankees in the AL East race. They just added a former All Star leadoff hitter to a lineup that desperately needed some patience, speed, and defense. Those are the facts. Welcome back, Brian Roberts.