You are Fucking Magnificent

Q & A with Aaron Reynolds of Effin' Birds. 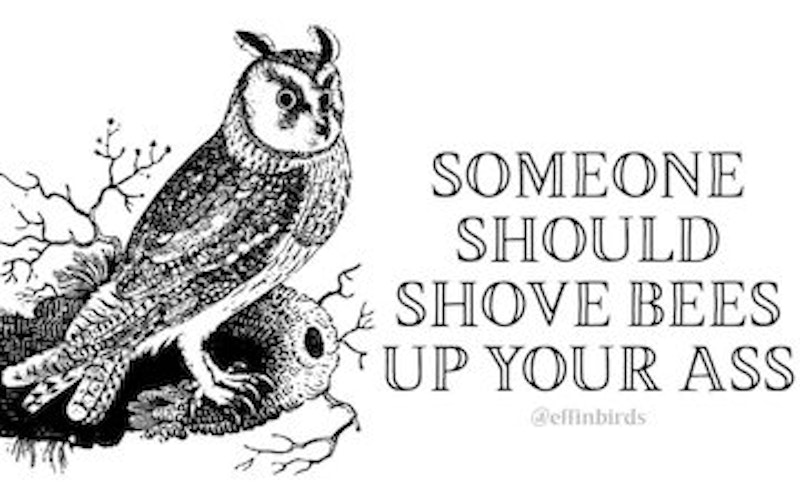 The concept is simple: Audubon-like historical bird illustrations paired, like the metaphorical middle-finger bird itself, with profane captions. This simple brand of humor, more aggressive than passive, always condescending, and forever appropriate for that someone in your life, has risen from meme state to literary permanence: Effin' Birds the Twitter account has landed in a humor book. All your least favorite species of humans are represented by fictional bird species (the “Indecorous Gull” has “abandoned all attempts to participate in polite society” yet “the problem is definitely society and not the thing where it is always being an asshole".)  I caught up with Effin' Birds creator and author Aaron Reynolds.

Splice Today: What gave you the idea to start an account pairing historical bird drawings with profanity?

Aaron Reynolds: It was a pitch I put together for a big media organization—they were struggling with their comedy brand on Twitter and were fans of Swear Trek, and I pitched them something very close to Effin’ Birds. They didn’t like it at all, and I had a moment of uncertainty because I thought it was a terrifically funny idea. A few days later I decided to do it myself anyways as a kind of “I’ll show you guys how great my ideas are” ad campaign for my services, and within a week it was more popular than their brand. And as of today, Effin’ Birds is 25 times more popular than their brand and is my day job, so I guess doing it myself was the right choice. I’d love to extend a huge thank you to a handful of executives for passing on Effin’ Birds, because that “no” changed my life.

ST: Did you ever think that your social media would take off to the point of hundreds of thousands of followers?

AR: No. I had originally thrown myself into Twitter as a coping strategy when I was so ill that I couldn’t work for three months. I was feeling isolated, losing my mind and threw myself into a Twitter project that blew up massively just as I was returning to work. That was @BatLabels, an attempt to collect every label or sign related joke in the 1960s Batman TV series. Almost everything I’ve made that has been successful has been a coping strategy for me—I think this becomes especially clear for Effin’ Birds in the book, where I maintain the fiction that it is a bird spotting guide by adding habitat and characteristic information about the birds, ultimately revealing them to be all the people who have wronged or irritated me in some way.

I believe that all experiences are fuel, and when I’m faced with a never-ending meeting that does not resolve our major pain points it has been far more productive to sell a few hundred mugs that say I BET THIS PROBLEM WOULD GO AWAY IF WE HAD MORE FUCKING MEETINGS instead of griping about it to my co-workers.

ST: What is it about your brand of humor that you think connects with people?

AR: There are two parts to it. One is the unexpectedness, the blast of disconnection. My favorite Monty Python sketch is a version of Chekhov’s The Cherry Orchard performed by oafs who destroy the set and accidentally injure each other. That’s my aspirational comedy goal, to make something as funny as that sketch.

The second part is empathy. At my old job I spent a lot of time teaching other people how to show empathy. Not how to have it, because I’m not sure that it’s a teachable trait, but how to demonstrate to someone else that you’re feeling it. Rather than saying “I know how you feel,” describing a time that you felt a related emotion. Removing excess detail from a story to make it more relatable. And some other fine points of economical language use that have sharpened up the writing of Effin’ Birds.

ST: As a Canadian do you think Canadians are more or less profane than Americans?

AR: It’s hard to generalize—in the same way that someone from Georgia is likely to bristle at being painted with the same brush as someone from New York, suggesting that Albertans and Ontarians are the same could start a bar fight. I’m a big fan of the attitude towards profanity in Québec, though: shit and fuck are just some words, to be truly profane you have to use words related to the Catholic Church. For Canada Day I usually post some Québécois cursing on Effin’ Birds, and someone used an online translation tool to figure out what they meant and complained “Google says this means ‘Jesus crackers.’” From now on I will only refer to communion wafers as Jesus crackers.

ST: Were you ever a birdwatcher? How many bird species can you identify by sight or sound?

AR: I really don’t know anything about birds. I’ve learned more about identifying them by their call and silhouette from playing Red Dead Redemption than anywhere else. That said, I’ve seen a colony of oil birds, which puts me in the one percent of bird spotters.

ST: Did it a) bother you or b) provide inspiration that when Audubon interviewed you two years ago, there was a comment that someone was canceling their membership to the Audubon Society because they were offended that birds were being paired with profanity?

AR: I’m a big fan of overreactions. That is someone depriving themselves of a thing they love to make a point that the intended recipient probably won’t even notice. That takes a serious commitment to personal misery and I feel a lot of sympathy for that person’s family.

ST: In that interview two years ago you said your kids were helping out with content, like for example that your then seven-year old created the now-classic “EAT FARTS” bird… what are their ages now and are they still helping?

AR: Nolan, who’s now nine, signed about 40 copies of the Effin’ Birds book one afternoon. He was very proud of his contribution and also his fancy signature. His older brothers, Oliver and Theo, are 12 and 14.

ST: And did you eventually end up quitting that day job?

AR: I did! A year ago in June. We came to an impasse because I needed time off to write to make the Effin’ Birds manuscript deadline, and my workplace didn’t want to work with me on that. “I guess you’re going to have to choose between the book and this job,” said my manager. Three days later, I quit.

ST: In the interview you mentioned buying the original 200 pieces of bird artwork—how have you dealt with the need for more bird images since then?

AR: When tracing the origins of some of the pieces in the stock art package I bought, I learned about Thomas Bewick and his two volume History of British Birds. I tracked down vintage printings of it and spent a year and a half scanning, cataloguing and cleaning up those remarkable birds.

ST: You’ve said you love the owl that’s your profile photo, but do you have a favorite bird/word combo?

AR: I like the duck that says BUTTSAUCE because it’s so silly, and the owl that says SOMEONE SHOULD SHOVE BEES UP YOUR ASS because it’s unnecessarily aggressive.

ST: How did you decide to make the transition from the humor account into the concept for the book?

AR: When the book came up I had to justify (to myself, at least) how Effin’ Birds could be a book and not just a printed collection of tweets. People would’ve bought a printed collection of tweets, but it would be for the audience that already exists and no one else. I wanted to make something that could stand on its own and at least pretend to be a book. And I needed to simulate the context of social media, where Effin’ Birds appears to be commenting on the timeline around it.

ST: Tell us about the other humor accounts you run and how you juggle them.

AR: The key is to make good use of reruns and automation to keep projects active that I’m not currently writing new material for. I’ve written 1400 jokes for Swear Trek so far, and the transitory nature of Twitter means that most of the people following Swear Trek don’t see most of the posts, so I can take a few weeks off here and there and people generally don’t notice that they’re getting reruns.

AR: Right now I’m in full promo mode to make the most out of this book opportunity. I had a couple of quiet months right before launch, so I spent the time to sharpen up a half dozen pitches for my next project.