Authoritarianism is the Least of Liberals’ Problems 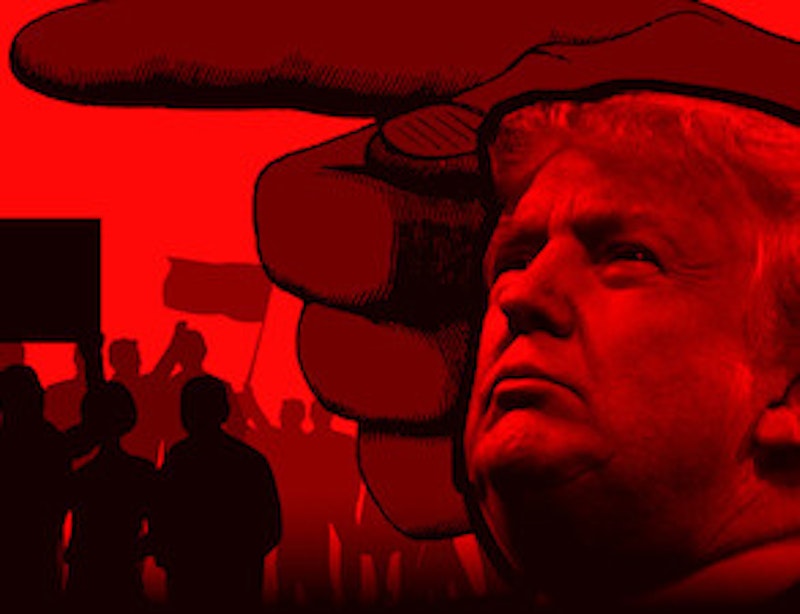 Damon Linker is worried about authoritarianism descending on the U.S. in what the cliché enthusiasts of the media love to portentously call the Age of Trump. At least Linker’s not agonizing about looming civil war, like numerous geniuses on the Web are right now.

Authoritarianism? Linker’s purview is too restricted. I prefer to take a wider, longer view. A great disintegration is in progress: the rotting away of the foundation of that gigantic monument to corruption that we call liberalism. Almost every major American institution that reactionaries like me have despised throughout our lives—the university, the media, the major political parties, etc.—is currently in some stage of crisis. As recently as 10 years ago, I was sure that the future would look the same as the recent past, ad eternum, the timeline of our obscene neo-liberal society stretching out towards an infinite gray horizon. But now I see that I was, happily, wrong and that old dogs like me will increasingly have our day.

This is a unique sensation for an ailing pessimist in his 60s to have. That time’s tide should be turning in “our” direction seems so unlikely as to be unreal. And yet, try as I might to discount the evidence before me, so as to avoid confirmation bias, I find it hard to deny that this is all happening.

This sensation is, you might argue, a romantic and a revolutionary one—bliss was it in that dawn to be alive, and all that garbage—and thus an inherently unconservative one. But then, we reactionary conservatives aren’t required to conserve what’s wicked and putrid and rotten. Faced as we are with a soft-totalitarian liberal regime that seeks to destroy us and those things that we associate with the Good, our task is not to “conserve it,” but to help kick it to death to the extent that our strength allows. This act of revolutionary violence will represent, at the same time, a restoration. To shift metaphors, the dissipation of the fetid, stinking vapors breathed forth by our current regime will allow the re-emergence of the stars in the firmament, in all of their permanence and beauty and glory.

Anyway, as concerns Linker, he’s—here’s yet another metaphor—missing the forest from the trees. Whatever authoritarianisms either the Queens pimp or the federal government have planned for us might be unpleasant, but they certainly won’t be important—or rather they’ll have roughly the same importance as you’d ascribe to the oboe part in Mahler’s Resurrection Symphony. You don’t want to belittle that part; it has its status, its place, its dignity and deserves respect. But against the grand sweep of the work in toto, it’s a small thing, and should attract attention from only the smallest-bore academic specialists.

Trump’s “authoritarianism” is, I’m pretty sure, among the least terrifying of the bogeymen that wait in the shadows to terrify fetishizers of the dying liberal order. That will become more and more apparent to them as everything they have believed in, and believed to be permanent, continues to die and as the world that they thought they ruled, and in which they felt so comfortable, becomes something unrecognizable to them.

A fascinating email comes from a reader in Dallas. The gentlemen is a Russian Orthodox convert like I am, and a keen independent scholar of the Orthodox Church. He sends me some information relevant to an intellectual interest of mine: the comparative methodologies of monastic onanism throughout the non-Protestant Christian denominations.

Some of my readers will be aware of Eastern monks’ historical propensity to abuse themselves using the “overhand” grip. In this grip, the knuckles of the fist take their place atop the shaft, while the thumb lends its steadying influence on the bottom.

What my correspondent “adds to the conversation” is that this “inverted” grip carried an important theological—we might even say ideological—valence. As far back as the 15th century, apparently, the overhand grip was explicitly defined as the “Mount Athos Grip” by its triumphant monkish practitioners. Many of these were in fact residents of that great Orthodox monastic island in Greece and wished to valorize their favored masturbatory technology by association with it.

By contrast, the Orthodox clergy associated the standard “underhand” grip—where the knuckles shuffle on the underside of the phallus, while the thumb provides a wonderful pressure to the top—with the perversities of the Roman Catholic Church. In fact, the Most Holy Governing Synod of the Russian Orthodox Church in 1744 anathematized this underhand so-called “Vatican Grip” as an unmanly perversion.

I’ll have more to say on this topic in the future. I do want to end on an uncharacteristic note of techno-optimism, however. The fact is that in the pre-Internet era it’s unlikely that my Dallas correspondent would’ve been able to find me, so as to share with me these informational gems. These days we hear constant scorn for the dehumanizing and alienating effects of digital culture. I regularly express that scorn myself. But there remain times, even now, when the Internet fulfills its early promise as a medium for the creation of communities and the encouragement of free discourse—and it’s a measure of my increasing optimism about the world that I feel the need to call attention to this now.