My musical education began by playing those plastic platters with a hole in the middle. 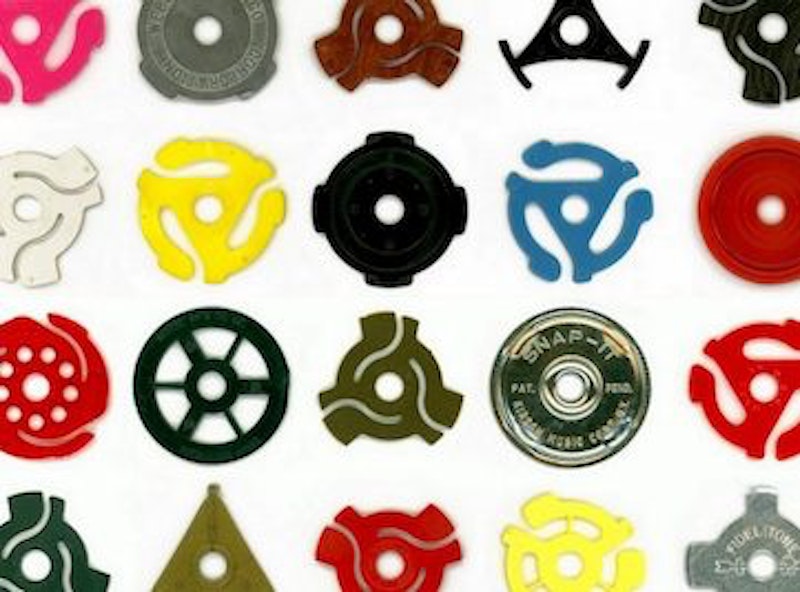 Everything old becomes new again. Everything vanishes in time eventually too. The same can be said for music that comes and goes. The giant egg laid by the golden goose is a big one-hit wonder for future generations. The late, great Pam Purdy from the defunct free weekly, City Paper, once inquired of me what my favorite records were for a story she was writing. As it turned out, the list was all 45’s from my childhood. I remember most of them while others came back slowly as years dwindle and accumulate.

“Needles and Pins” by The Searchers; “Bits and Pieces” by The Dave Clark Five; “Poontang” by The Treniers; “Ling Ting Tong” by The Five Keys; “All I Want For Christmas” by The Three Stooges, among too many others. 45’s were the in thing since 1949 when RCA released the first one, “Texarkana Baby” by Eddie Arnold. Only one year before that record companies like Capitol and Decca had released the first long playing 33 1/3 discs replacing ancient outdated 78 rpm brittle discs.

45's were a part of my tender years, together with rock ‘n’ roll and the Top 40 charts. Graduating from kiddie records of yellow and red vinyl. Songs like “Little Brown Jug” and “Mary Had A Little Lamb,” the latter titled instrumental rendition of the first ever recording made in 1877 by Thomas Edison. Although I no longer have any of my old 45’s there are great memories of listening for hours, replaying the same songs over and over again. Trying to catch the lyrics to songs like Jimi Hendrix’s “Crosstown Traffic” or The Doors’ “Light My Fire.” My musical education began by playing those plastic platters with a hole in the middle.

There were never enough of the plastic inserts used to fit the records onto a record player spindle. They were called spiders or thingamabobs. Shaped like a squished creepy crawly bug or some sort of Sci Fi  space age object d'art. They snapped into the 45 tight if you were lucky. It was easier just to stack them up on the auto record player and flip them over to the B side or rearrange them according to best favorites. It took a little practice and a lot of finesse to get everything down smoothly in the groove. You became your own disc jockey spinning the No.1 hits and the obscure personal faves of the day.

The jukebox was made specifically for 45’s and every malt shop, soda fountain, ice cream parlor and bowling alley had one. No bar was complete without it. Diners had them installed right at your booth so you could play songs while waiting for your burger and fries. If your teen recreation center had a jukebox and a pinball machine your day was set until the quarters ran out. Some say records are making a big comeback. Others claim cassette tapes are coming back too.

Today, there’s no need for records, tapes or CD's. It's all out there in the air now. The history of music at your fingertips. Free or pay services are everywhere, streaming every possible musical genre imaginable. Easy access to a world of musical tastes awaits your listening pleasure. Ten thousand songs can fit on a pinhead, millions more await to be played. It’d take three lifetimes to listen to all the songs streaming on the Internet. Whether it’s on a microchip or mp3 you can pick and choose to your heart’s desire. In effect we eventually become the devices of our destiny. It’s funny and sad when you think how far we’ve come and gone. Its seems like yesterday when I was hammering out a poem on my Royal typewriter manufactured in 1910. The next big thing will be us. Obsolete quivering blobs of blubber doing the hippy shake to the latest sounds in our earbud heads with camera lenses where eyes once were.