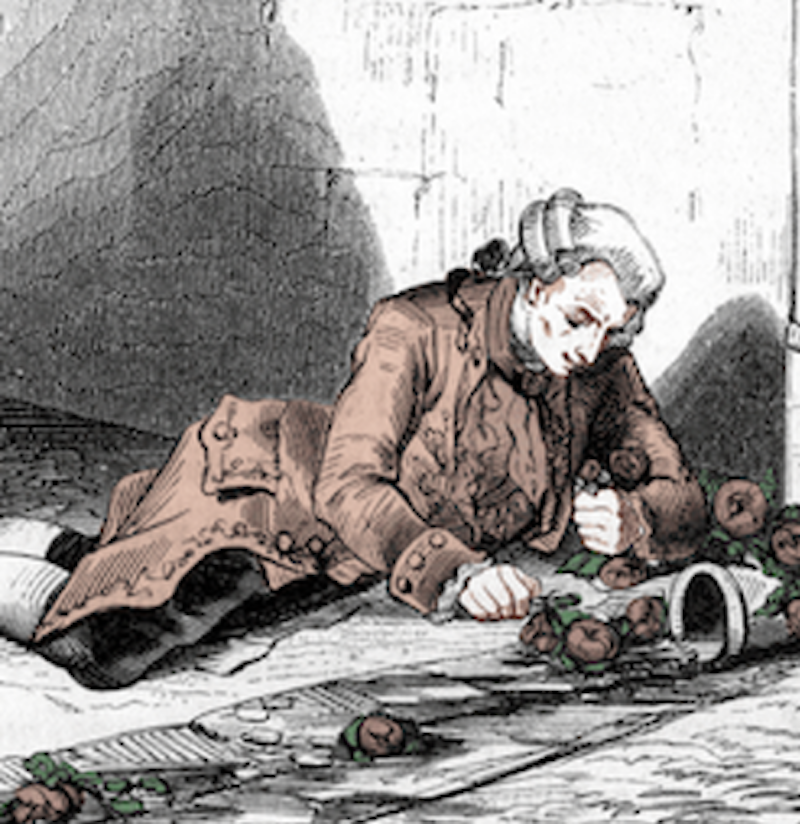 We’ve come a long way. Novels by the Marquis de Sade, which (more than any of his confessed violent crimes) ruined his life, are legal and easy to obtain. (Fanny Hill, which is about as pornographic as an average fifth-grade darefest, wasn’t fully legal until 1966.) At some point in our history, the 9th District Court of Somewhere presided over a landmark court case where innumerable witnesses swore that readers of banned books spend more time pursuing tenure than they do committing unthinkable acts of erotically motivated homicide. Which is true.

By then, of course, de Sade had already become a major inspiration for generations of rebellious Continental types, especially those artists and philosophers who were into decadence, surrealism, and the prolonged, deliberate misuse of Freud. The list of such luminaries is far too long to include here, but I’m sure you get the idea. I’ve stumbled across references to de Sade in all sorts of academic literature, including The Pleasure of the Text by Roland Barthes, who is a postmodern semiologist. In other words, he was paid to study what things mean, even though he repeatedly concluded that nothing meant anything. In France, which is more Catholic than you can possibly imagine, reaching such conclusions is considered both difficult and heroic.

Barthes can barely wait to start in on his comrade de Sade. The following passage appears (suddenly, without warning) at the top of page six:

Sade: the pleasure of reading him clearly proceeds from certain breaks (or certain collisions): antipathetic codes (the noble and the trivial, for example) come into contact; pompous and ridiculous neologisms are created; porno­graphic messages are embodied in sentences so pure they might be used as grammatical models. As textual theory has it: the language is redistributed. Now, such redistribu­tion is always achieved by cutting.

This is definitely wrong, as anyone who tries picking up de Sade’s Juliette can tell you. Juliette is approximately 1200 pages long. It’s a damn good thing it stayed illegal for 150 years, because otherwise nobody would finish it. De Sade did not sculpt a work of rigorous, concise, jagged pornography. He produced a frenzied, garrulous, overwhelming torrent of obsessively repeated incidents and themes. Nothing gets cut or boiled down. There’s no evidence of postmodern juxtaposition; instead, de Sade writes with the naive confidence of the fetishist who thinks everyone will understand him, even when his recipes for pleasure become mind-bogglingly personal.

The sentences are not pure, contra Barthes. While some of them could serve (for who, exactly?) as “grammatical models,” others are pretentious and convoluted. Barthes’ own reference to “pompous and ridiculous neologisms” attests to Sade’s uneven, undisciplined prose; where Sade is at his most limpid, stylistically, he’s simply imitating his era’s primers for schoolchildren. Nor is Sade engineering collisions of the noble and the trivial; that had already been done two centuries earlier, to perfection, by William Shakespeare. De Sade never bothers with trivialities at all. Who are Juliette’s parents? What does her nose look like? What’s her favorite color? We don’t know because de Sade doesn’t care. His version of human nature removes every mundane wrinkle; in the words of Tyler Durden, from the David Fincher movie Fight Club, de Sade “let[s] what does not matter truly slide.”

This is the reason why—despite what Barthes claims about Sade, all of which is far truer of Barthes than his subject—he is basically right to put de Sade front and center in a book about the reader’s bliss. De Sade is a towering figure in any literary canon founded upon joy, for reasons at once enlightening and complex. Let’s start with the obvious. De Sade couldn’t stop writing. After he was arrested for publishing Juliette, he began composing The 120 Days of Sodom, in miniature, on a tiny roll of paper he kept squirreled away in the wall of his prison cell. This is the kind of behavior we reserve, in general, for the most important utterances of our lives. That Sade would do this in order to write yet another novel mixing pornography with philosophy is both ridiculous and baffling. He has finished two novels that already overlap; he has nothing substantial left to say; the content isn’t what’s driving him. What’s driving him is his relationship with his ideal reader. He sacrifices everything that’s his by right, including both freedom and libertinage, to that. This is the first exciting thing about de Sade: when you read him, you become (by default) the love of his life.

The Marquis de Sade is also the first person to enjoy the deaths of minor characters. You know how, when a minor character dies in a regular novel, you have to feel some kind of court-appointed guilt? In Juliette, it’s not sad at all. It’s a cause for celebration. It reminds me of one of my favorite psychiatrist jokes. “Doctor,” a man tells his psychiatrist, “people all think I’m nuts.” The psychiatrist replies: “So why don’t you kill them?” Now in real life, you can’t go around killing people indiscriminately, because it’s exhausting. It’s hard, thankless work. But Juliette is not real life. I can’t emphasize this enough. Juliette can do whatever the fuck she wants. She loves killing people, and I don’t blame her—other people are annoying as hell. Reading de Sade is an experience in freeing your imagination. If doing that seems immoral to you, then you’ll never dream up anything of consequence, because you’ll never discover what it is you like.

Juliette is also exactly as long as you want it to be. You can read it for 100 pages and stop; you can read the whole thing; you can read five pages and give up. It’s a fractal. Every experience of Juliette is absolutely identical to every other experience of it, no matter how long or short. This is not only extremely convenient; it’s intimately related to how perfectly fictitious everything in Sade’s universe is designed to be. Nobody waits for gratification in Juliette, and no endeavor encounters a serious obstacle. Juliette has no other content besides pleasure. This isn’t true of other pornography. Other pornography has tons of unnecessary content: “the plot is ludicrous,” as Maude Lebowski once observed. People don’t strip off their clothing in Juliette; they walk around naked. People don’t work their way to opulence; they’re bathed in it from birth. If de Sade includes something, you better believe he thinks it’s delicious. Perhaps you disagree; that’s well and good. It’s much more fun to read about something in Sade, and find it disgusting or dull, than it is to read about something disgusting or dull in another “erotic” novel and realize it’s there because the author thought you’d like it. That’s both unpleasant and insulting.

Having sex with a stranger, in de Sade, is (among other things) a declaration of war on marriage. It’s a statement about what it means to be human. It’s a statement about incomprehensible divine justice. It contains multitudes. Of course, Sade also makes people scream out loud, “There’s more to life than sex!” Then they go on to explain, to anyone within earshot, how important certain non-sexual things are. In their frustration and their shock, they go into incredible detail about how wrong Sade gets life, often reaching for a pen just so they can get all their thoughts down on paper. Whatever happens next is their art, their chosen antidote to reality.

Somebody once said, speaking of The Velvet Underground & Nico, that almost nobody bought it, but everyone who did started a band. Juliette’s pretty much the same way. Because there’s more to writing, and to life in general, than Juliette, no other book makes me quite as hungry to get out there, and write, and live, just so I can prove that old lecher wrong. This would undoubtedly fill him with delight.