Tinkering with the allure of potency. 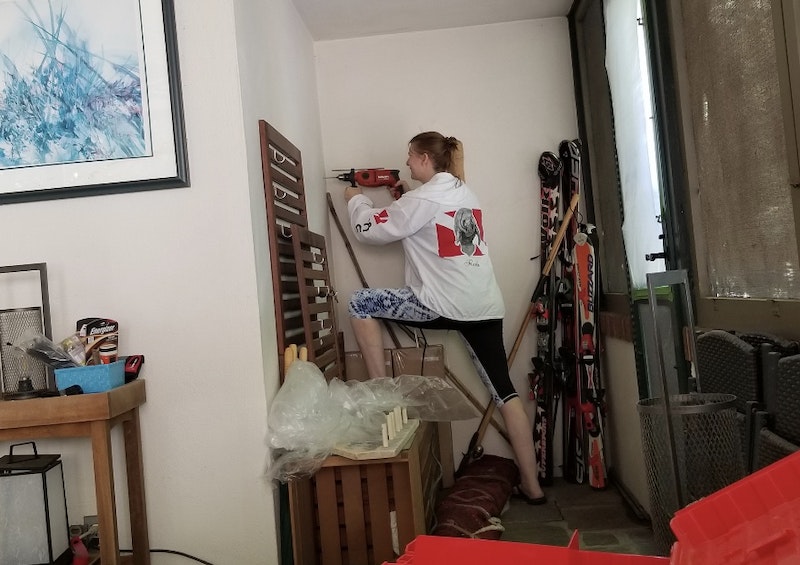 My wife has a lot of power tools and knows how to use them. This capacity intrigues men and women alike. Her uncle, a housebuilder in Vermont, on a visit once said she has more tools than he does, perhaps an exaggeration but not by much. When I put a picture on Facebook of my wife drilling into a wall on our back porch, the mass approval was swift. “Women and power tools—an awesome combination that few men deserve to handle,” wrote one female friend.

During the pandemic’s spring peak, my wife did a lot of work on the basement, painting, tiling, and setting up spaces for remote schooling and karate. Later, when we had friends over for a socially-distanced picnic, she took them down to see the basement, and the visiting couple asked where the bondage rack was. Power tools can unlock the imagination.

I’ve never been handy, though I’ve slowly gotten better since we became suburbanites. A decade and a half ago, on one of our early dates, my future wife was appalled at my excuse for a “toolbox” with its random screws, nails, rubber bands and little more. I’d cut my hand on the back of an old air conditioner I was installing in my apartment window, and a better way of securing the device was in order. She brought new tools for me on the next date.

My wife is an architectural lighting designer, a job that requires time on locales of construction and renovation. Knowing your tools garners the respect of men working at these sites. Being unfazed by a give and take of salty language and off-color jokes helps as well, she tells me.

I got a call from a pollster the other day. A lot of the questions were on predictable topics: Trump, voting by mail, COVID. But one question from the pollster, a woman, came out of the blue. It was prefaced with something about how perceptions of “male” and “female” have changed in society over time, and she then asked if I considered myself “totally male,” “mostly male” and so on, across a spectrum that ended with “totally female.” After a moment of thought, I said “mostly male.” These things are not strictly either-or, I surmised.

“All things swim in continua,” was a phrase coined by philosopher Charles Peirce and revived by science writer Martin Gardner, who was an intellectual hero of mine. A few years ago, as part of my freelance work at Scientific American, I fact-checked a complex graphic showing various ways in which genetics and physiology can shape an “intersex” person. The facts were pretty clear that sexuality is a spectrum, even if most people readily identify as being male or female.

And such biological issues barely begin to tap the complexity of people choosing to engage in activities and social roles at odds with conventional expectations of which gender does what.

The polling organization that called me put out some results but didn’t include any about their male-female question, presumably longer-term research. I’d be curious to know how those answers might have correlated with the political ones. Are men who say they’re “totally male” more likely to vote for Trump? What about women who say they’re “totally female”? And while it was outside the poll’s scope, what about women who like to use power tools? I could imagine them being a divided demographic, with right-wing and left-wing elements.

A grievance at the undervaluing of mechanical skills, once perhaps a left-wing sentiment, has been a factor in Trumpism. I’ve heard complaints along the lines of “You liberals don’t know how to change an oil filter, but you want to run our lives.” A friend of mine once rebutted such sentiments by asking on Twitter when Trump or Jared Kushner had ever changed an oil filter.

Nikolai Tesla, world-historical mechanical genius, did an interview in 1926 published in Colliers magazine under the title “When Woman Is Boss.” Imagining technology empowering women, he stated: “This struggle of the human female toward sex equality will end in a new sex order, with the female as superior.” Yet he thought this would arise from information systems, not mechanical tools: “It is not in the shallow physical imitation of men that women will assert first their equality and later their superiority, but in the awakening of the intellect of women.”

The symbols of power evolve in ways hard to predict. The mini-skirt, in various times and places, has been seen as liberatory or sexist, or just a fashion option, or suitable for changing a flat tire. Women with power tools may signify many things, but they are definitely here to stay.