Why I’m Voting for Donald Trump

He’s no Putin, but isn’t beholden to oligarchs. 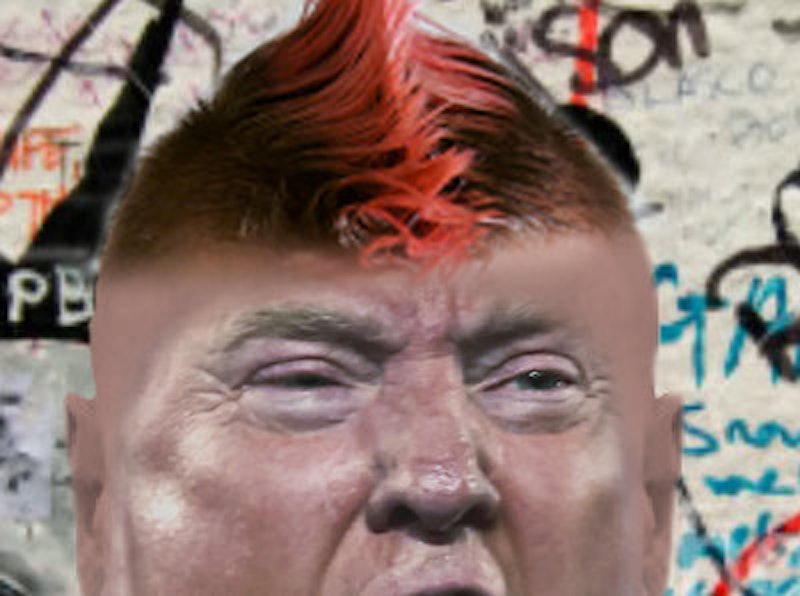 I turned 62 a couple of weeks ago. Aside from my collapsing spine and disintegrating teeth, I’m physically fine. My liver is a cleansing mountain stream and my lungs are an azure Alpine sky. I have the heart of a randy wolverine. My turds have wings. The lycanthropy problem seems to be under control since I laid off the meth and acid back in the 1990s. Priapism in mixed company is still an issue, but babies no longer scream in abject terror when I walk by, nor do the dogs whine and whimper. The black folk are kind to me, and Jews take me for one of their own. Nazis salute me on the street. Lesbians follow me up the avenues whistling lustful tunes. Mexicans have a saint named after me. The Irish buy me drinks; Russians and Sicilians protect me. Even the French love me. I got drunk on Hezbollah’s tab in an ice cream joint at the beach near the Hard Rock Cafe in Beirut in April, 2001. Beirut is still my favorite city. I have never felt more welcome anywhere.

In short, my life is good. Sure, I harbor a hurricane of hate, but I don’t hate people because of who they are: I hate them for what they do. The list is long, and it gets longer every day. My shit list is an example of diversity and multiculturalism. Narrow-minded anencephalic dogmatists call me “racist” or “sexist.” I am neither. I am a proud misanthrope, and that’s why I’m voting for Donald Trump.

What does it say about us when the sanest person running for the highest office in the land is John McAfee?

I left New York City in 2005 because I rightly perceived that it was becoming hideous. I don’t regret that for a minute. I’ve visited NYC three times since then, each time more depressing than the last. I’m not going back again. There’s a better version in Vegas. California is dead to me. There’s no water, and they still think they’re All That And A Box Of Chocolates out there, despite the fact that they’re drowning in a sea of red ink and a tsunami of illegal invaders from various third-world shitholes doing a smash and grab on our paltry social services and working off the books as scab labor.

The ugly truth I’ve discovered is that the whole fucking country has morphed into a hideous overpriced theme park replica of itself, the theme being dystopia. We are all living in the shadow of Manhattan. If he’d laid off the amphetamines and gotten off the sofa once in a while, Philip K. Dick would’ve turned 87 this week. He’d recognize this place. America in 2015 is exactly what my worst LSD trips envisioned back during the Nixon years.

I never thought I’d miss Nixon. I’ve had enough of this uniquely American “friendly fascism.” I prefer my fascism straight up, no chaser. Aleister Crowley once opined that giving women the vote would only increase their lesbian tendencies. If Hillary Clinton is any indicator, he was right. Abraham Lincoln thought that black people were savages, in no way capable of achieving equality with people of European descent. It’s no coincidence that America’s rise as a great power took place during a period when immigration here was restricted to 180,000 per year, from first-world countries only, strictly quarantined and screened for diseases. Those restrictions were lifted in 1965, and it’s been downhill ever since.

It’s time we lowered our expectations. We need to see the world as it is, not as we wish it to be. I’d rather hear the ugly truth than surrender to the false bliss of sweet lies. Trump is very good at delivering the ugly truth. He may even be capable of doing something about it. The others sure as hell aren’t, with their weak-willed mealy-mouthed subservience to oligarchs like the Koch brothers, Sheldon Adelson, and Haim Saban.

Most Americans I speak to have come to admire Vlad Putin enormously. Despite the best efforts of our corporate-controlled media propagandists, they rightly perceive him as a patriot, a servant of the interests of Russia and the Russian people. They wish that we could have a leader like that; hence, Trump’s enormous popularity. Trump is no Putin, that’s for sure, but he isn’t in any way beholden to the oligarchs. They derailed Ron Paul in 2012 by outright fraud and ugly smears because Paul was too dignified and decent to get down in the gutter and wrestle with them. Trump is a punk from Queens. He’s the Ramones, blunt and brutal, with a brass knuckles approach to bullshit. Deal with it.