It’s as good as dead. 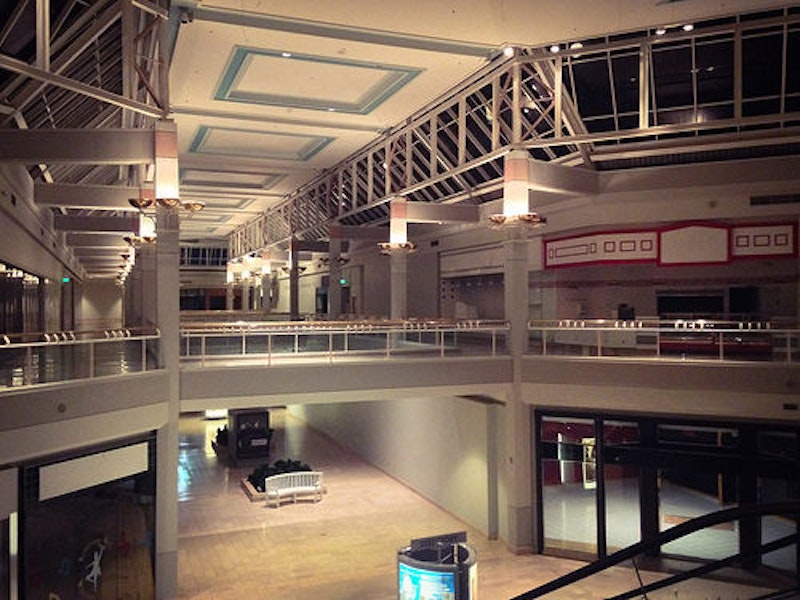 There was a time, long ago, when circumnavigating the Owings Mills Mall at this time of year was terrifying for a novice driver. Arteries of fluid chrome dripped into and out of parking lots. Ingress from Owings Mills New Town, 795, the Reisterstown Rd. corridor, and a handful of nearby edge city outcroppings didn’t help. That scene was a perpetual mess, mostly because it was the place everybody wanted to be whether they needed to be there or not, and because there weren’t any other proper malls for dozens of miles around—unless you were game to hoof it out to Columbia, Golden Ring, Mondawmin, Towson Town, Kenilworth, or Security Square, and forget that. Any given December evening had to have been an uncertain tangle of voices, lights, and anxiety for anyone laboring under the laminated weight of a learner’s permit.

A nervous teenage motorist warily circling Owings Mills Mall any December evening today would encounter a markedly different scene. All this teenager would need to do, really, is turn on his or her headlights, because Owings Mills Mall is lightless and all but dead. The big boxes are shuttered and vacant. The lots are empty. The food court is no longer accessible, and no one works there. The towering lights are off. The darkness swallowing Owings Mills Mall is imposing, deep, eerie, damning, almost tangible in nature, and the improbable resilience of J.C. Penney’s—the sole remaining sign of retail life, where security vehicles weave through rows of cars—is a dash of sea salt seasoning a gaping wound. To contemplate this abandoned monolith is, inevitably, to wrestle with some contradictions. After the mall was built in 1979, the surrounding region sprang to life all around it: suddenly there was 795, and a Metro Subway station, and all manner of office buildings, and Owings Mills New Town. Condominium developments popped up around the mall; a rash of chain standalone restaurants—Red Robin, Red Lobster, Don Pablo’s—a materialized nearby; a movie theater was erected. Now it’s as though all of these elements are planets obliviously orbiting a dead star.

It was at the Owings Mills Mall that I bought presents for my family at Christmas and subsidized The Big Cookie and browsed stores like The Sharper Image, wondering faintly what adulthood would feel like. Adulthood is leaving the movie theater across the way, taking in a mall that’s begging for wrecking balls, staunching the sadness welling up inside, and moving on to other, more pressing worries.