I could've made a perfectly nice fruit salad. 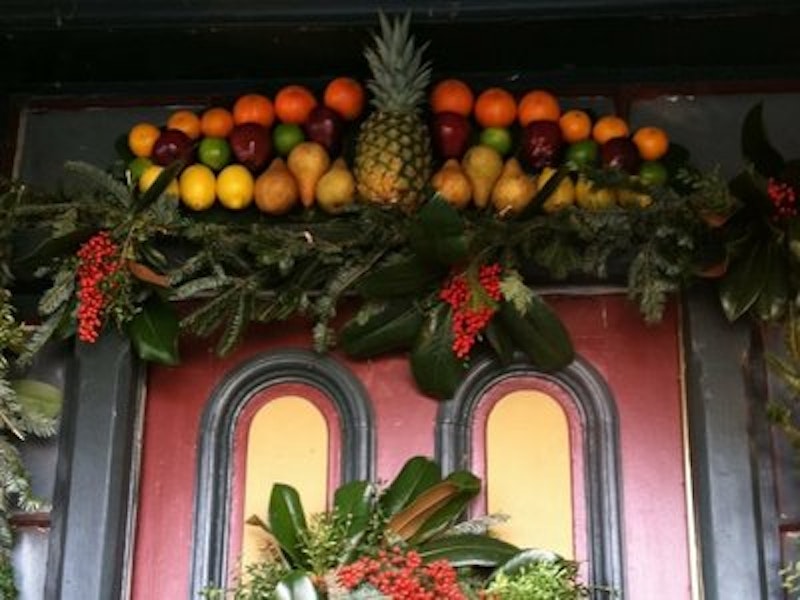 “I will not let these lemons win,” I vowed, 15 years ago, when things like impressing the neighbors with my holiday decorations mattered.

The holiday season had arrived for the first time at our fixer-upper Victorian and with a candle in every window at a reasonable cost of 26 extension cords, the house had the kind of glow that comes only from not seeing the peeling paint on the trim. Candles aside, the one old-house holiday decoration I’d always envisioned was “that fruit thing.” Historic house decorating enthusiasts undoubtedly have a more formal name for the bountiful arrangement of fruit and foliage that arches enticingly above entryways but I have come to know it fondly as the fruit thing.

I’d long admired these creations for many years above lovely doors on other people’s houses. One day, I thought, I'll have one over my front door. So when we’d finally moved into my 1881 dream house a few months before Christmas, I’d looked forward to purchasing the apples, oranges, pears and center pineapple to grace the entry. How stunning it would be! The Life Saver colors! The perfect mosaic of shape varieties! Eat your heart out, Martha.

After spending hours measuring and trimming plastic foam shapes, arranging magnolia and boxwood leaves and impaling the glistening fruit, I began to wonder how craftier people actually defied gravity and made this happen. When the apples rolled down the front steps of the porch and out onto the street, I was aghast. The thing was way too heavy for its foam base and about an inch too big for the transom over the window. And when I went to secure it on his perch, it fell directly into my face, causing an avalanche of tangerines and Bosc pears the likes of which I'm sure my small town had never seen.

I looked around to see if any of the neighbors were watching. Then I calmly gathered up my somewhat-battered fruit and began again, patiently re-spiking the lemons and explaining to them that they were not going to get the best of me. I carved another inch of foam off the bottom, rearranged some leaves and hung a few more nails to hold the masterpiece in place.

Two hours later, I gently wedged the weighty arrangement into place above the front door. I watched. I waited. A pear slid slowly off its wooden spike. Pears are much too mushy for this fruit thing, I grimaced, double spiking it back into place. And magically, it held. I went to the street to look up at it. Gorgeous. Worthy of a home and garden TV show. A neighbor walking by with her dogs asked if I’d made it. I had, I proudly proclaimed, whisking at a small boxwood leaf in my hair and clutching my handful of killer wooden spikes.

The next day, I ran out to check. Unseasonably warm temperatures had invited a swarm of fruit flies to my little party. I sprayed the whole arrangement with Raid and then sprayed over that with shellac. Nice try, lemons. I stuck another spike in a loose pear. I took a picture, and wondered if she'd make it till Christmas.

Family, friends and neighbors commented for weeks on how beautiful my creation was (with the notable exception of my mother-in-law, who pointed out that I could've made a perfectly nice fruit salad out of the ingredients). Making plans already for next year, I vowed to trace the fruit thing when I took it down, because next time I was going for heavy plywood studded with angled nails instead of plastic foam to mount the fruit. (Fast forward a decade and a half: I never made the damn thing again).

Like a small Christmas miracle, the fruit thing actually survived the holiday season that year. I had to use a few spiked lemons I’d tucked into a pot to replace rotted pears when they fell, but she held like a champ. Well, okay, the pineapple fell off twice, and I realized that if I’d have sliced it in half, it would’ve lightened the load. But at least it never hit the mailman.

—This piece is an adaptation of an original article by Mary T. McCarthy entitled “The Festive Fruits of Her Labor” that appeared in the Home section of the Washington Post on December 12, 2002. Used by permission.