Fractured identity in this debut novel. 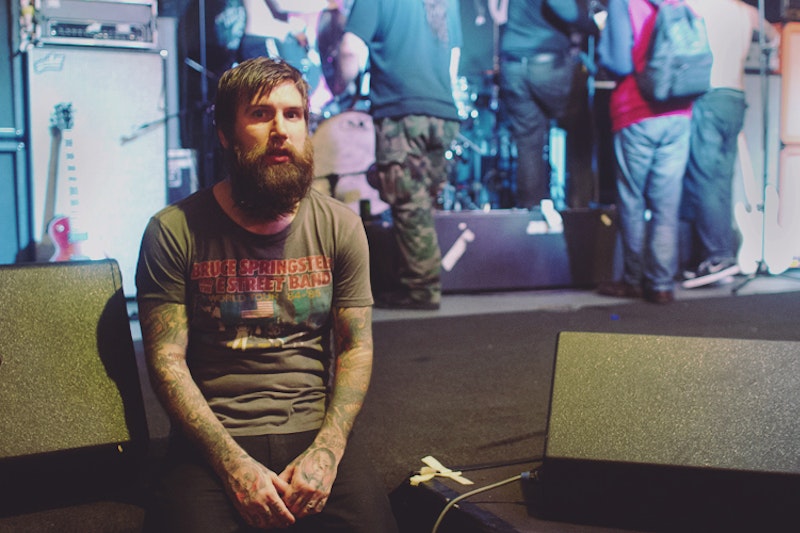 Keith Buckley’s debut novel, Scale, is a strange beast. If you’re a fan of metal or hardcore you know that, as the vocalist for Every Time I Die, Buckley has an uncanny ability to capture the simultaneous absurdity and ugliness of self-loathing in his lyrics. Scale accomplishes a similar feat while also diving into a nuanced examination of identity.

The book follows a duel narrative: the odd chapters show the narrator, Ray Goldman, trying to dismantle the most acidic parts of himself after experiencing tragedy on tour; and the even chapters trace the singer-songwriter’s initial path to indie renown. These strands constantly blur into each other, which echoes the fluid nature of Goldman’s struggle to reconcile his antagonistic musical persona with an everyday sense of self that won’t alienate everyone he loves.

We’ve all seen cultural icons get consumed by their larger-than-life personas. Phil Anselmo, Charles Bukowski, Slash, Hunter S. Thompson—at one point, each of these people lost the ability to distinguish between who they were in the spotlight and who they were to themselves and loved ones, resulting in a deep fracturing of self. One of the amazing things about Scale is that, via Ray Goldman, it allows the reader to witness this fracturing from the inside.

The novel is semi-autobiographical, and it’s easy to picture Buckley and his bandmates in many of the situations. (At one point, Goldman and his crew end up at a washed-up teenybopper’s house; the fiasco attains levels of ridiculousness that I hope are based on true events.) In Every Time I Die, Buckley is a maniacal antagonist, often conveying a deep cynicism for himself and the world that results in an ideal to not only embrace being an asshole, but to do it with panache. As with Goldman, Buckley’s musical persona has likely bled into his personal life in ways he didn’t expect and couldn’t fully control. And yet, also like Goldman, he can’t simply abandon the persona because it’s part of what has made people love him.

It’s brilliant that Buckley wrote Scale instead of a straightforward memoir. The similarities and differences between Buckley and Goldman enhance the mercurial struggle with identity that lies at the crux of this book. Throughout the novel, Goldman tries to distinguish (with varying levels of success) between his true self and the impish persona upon which he’s based his career. Because the book is semi-autobiographical, it begs the reader to ask what’s real and what’s not, pulling us into the bizarre hologram that both Keith Buckley and Ray Goldman likely see in the mirror when they wake up in the morning.