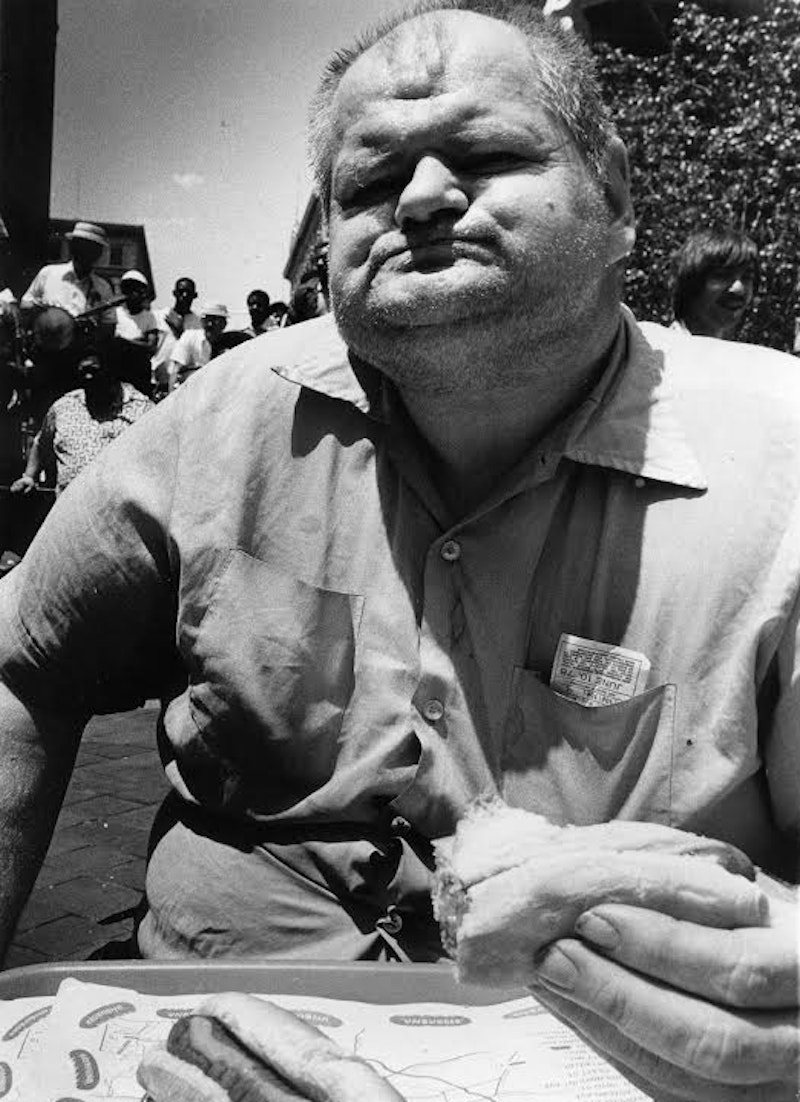 Let’s flip an old adage around and ask, “Do you eat to live, or live to eat?” Bet you didn’t think of that one, and I’m equally certain the fellow pictured above hadn’t either. I’ve no idea if this guy is still with us, since Jennifer Bishop’s photo was taken in the summer of 1978—she and I were noodling around for a City Paper story one Saturday afternoon and wound up in Baltimore’s pre-Harborplace Charles Plaza—and, additionally, I have no clue who he was. Could’ve been one of Eddie Warfield’s typesetters at The Daily Record; maybe a union man off from a back-breaking week at Sparrows Point; a runner for Soft Shoes McGuirk’s South Baltimore Stonewall Democratic Club; an off-duty cop; or a retired Baltimore Oriole who’d let things go in the exercise department.

This much was clear: he was the finalist in that year’s Polock Johnny’s knock-off of the Nathan’s hot dog eating contest at Coney Island, and though he didn’t go home with a bronzed polish sausage, citation or trophy—the winner, also captured on film by Jennifer, was a slender, younger man, who finished his 24th delicacy, accepted the prize, and promptly barfed all over the table, which was so Baltimore—he was content enough, and walked away from the set-up and went about his business.

As it happened, it was a dual assignment: I was watching a speech by the earnest but genial Anton Keating, a maverick (and losing) candidate for State’s Attorney that September, another windmill-tilter trying to knock off the incumbent Bill Swisher—who was a bit weird on the political side, but, it must be said, a really good guy and excellent company on the hustings and for St. Patrick’s Day pub crawls—who wouldn’t meet his electoral maker until four years later when future Mayor Kurt Schmoke took his post away.

(Schmoke, I should note, although rather dull in an interview setting, was forward-thinking, though he put a kibosh on his promising career beyond Baltimore, when, in the late 80s, he called for the decriminalization of drugs, a position that was gutsy, prescient and, at the time, ridiculed; he ran successfully for a third mayoral term in ’95, but it was so racially ugly that he was effectively a lame duck, just waiting to scamper away from City Hall, which occurred four years later with the surprise win by Martin O’Malley.)

Back to Polock Johnny’s. When I first moved to Baltimore in 1973, the local chain had outlets throughout the city, a particularly popular one on the not-yet-de-fanged Block, for instance, and later a storefront near my apartment on Greenmount Ave., operated by onetime TV news personality Rolf Hertsgaard, whose son Mark was a classmate of mine, and is a notable author, especially on climate change, and a terrific fellow. As the decades have passed, my tolerance for fast food of any kind is kaput, owing, I suppose, to a healthy diet, which precludes anything fried, or big portions of meat. Back in the 70s, though, I had an iron gut and rarely felt the ill effects of subs from Harry Little’s or even the trash served at the St. Paul St. Harley’s. I was a regular at the Little Tavern, not only for the mini-burgers but mugs of coffee and gelatinous slices of pie.

But a Polish sausage, with all the trimmings, from Polock Johnny’s was taking it too far. A darn shame, since they were really tasty on the way down: crunchy, the ooze of mustard and relish making the soft bun soggy. But while I never had a problem with the Italian sausage numbers sold by the thousands at festivals and ballparks, 12 hours after wolfing down one or two of Polock Johnny’s tubesteaks, my stomach was on the fritz. Can’t say I ever upchucked like the aforementioned fellow above, but intestinal distress could put a crimp in my day. Gives me the shivers just thinking about it.