Why I Abandoned My Corner Bar

The act was wearing thin. 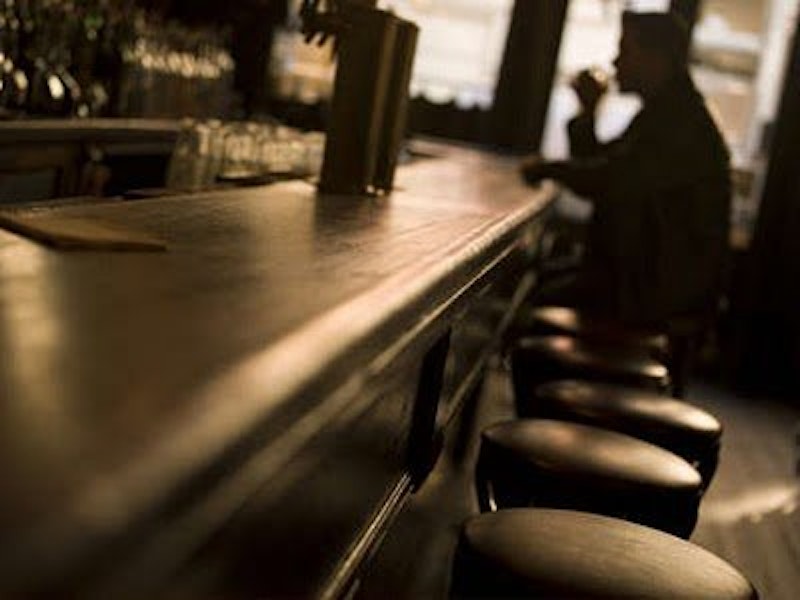 It's time to say goodbye to my corner bar here in Richmond. Let's call the place "Charlie's," to avoid any hurt feelings. The tension’s been building, and the breakup has finally happened. It makes me sad, as I’m still fairly new in this town, and Charlie's was always a good place to go when boredom struck—the kind of place where you can strike up a conversation with a stranger or catch a game on TV. Sometimes you just need to get out of the house and have a comfortable place to drink a beer. Charlie's was that place.

The sad element here is that Charlie's has the potential to be a great bar. Its fairly new owner just isn't up to the task. There's a lot of history there. Charlie's grungy walls are plastered with decades-old photographs of customers, some of whom still frequent the place. One of my favorite games at Charlie's was matching up someone in the bar with one of the old photos and seeing what they looked like 20 years ago. There aren't many places in the world where you can pass the time in such a way.

There's a photo of Jack Nicholson on the wall. While Jack is not a customer there, he was very good friends with "Jimmy," one of the old regulars who recently passed away. The story is that Jack once hitchhiked down to Richmond from his home in Neptune, New Jersey to see Jimmy, who Jack had met when Jimmy would spend his summers in Jersey. A bartender told me that many decades later, Jack would call Jimmy from his L.A. home and invite him out to stay with him for a week or so. That sounds like the Jack Nicholson I’ve always read about.

Jimmy's gone now and so are the old owners. The new owner is a manchild in his mid-30s whose wife makes a good living as a young professional. This affords him the luxury of not having an actual job. He can play around and pretend to be a real bar owner, but he lacks respect for the old owners and the current customers, so his act is wearing thin. This guy is the bar equivalent of a slumlord. He's lazy. A bartender told me that sometimes he'll spend the whole day at home, playing online fantasy games.

The new owner bought himself a place with a lot of history. He acquired a joint that, while it was probably past its prime, had a lot of character and atmosphere. He should feel a duty to maintain—or improve—something that took so many years to build, but he refuses to spend a cent on it. He chooses, instead, to let it fall into disrepair. He could start by fixing the hole in the men's room floor. Who knows what could crawl out of that? But when you're determined to just suck the cash out of place, a gaping hole doesn't bother you.

What's a shame is that I made a substantial time investment in Charlie's that’s now wasted. My status, for example, of being able to grab the TV remote control to put on a football game cannot be transferred to whatever other neighborhood bar I "relocate" to. I doubt I'll ever gain this privilege again.

Word has gotten to me that the previous owners are very unhappy with the job the current guy is doing with the business they built, with pride, as immigrants trying to establish themselves in a new country. It's a real slap in the face. An old blown-up black and white photo of the old owner's family still adorns the entrance to Charlie's, as a reminder of better times. I'm not sure how thrilled they are to have their faces associated with what the business has become. The current proprietor does not share their pride of ownership.

The final straw was the rodents. I probably could’ve hung in there if not for the mice that started appearing with greater frequency. I’d already stopped eating at Charlie's due to cleanliness concerns. I thought I'd just stick to beer, but the rodents scampering around the floor told me it was time to go. I happened to run into a pest control specialist a few months ago and suggested he make a call on Charlie's owner. I'm pretty sure he did, but my eyes told me he’d been rebuffed. His services, after all, were not free of charge.

So I've just ghosted out of Charlie's now. It's been over a month at this point, although I am tempted to stop in when I walk by, which is often. I passed by a couple of nights ago and stopped to read the outdated, yellowing menu that was taped to the window years ago. The prices were all $4-$5 less than what they are on the current menu, so someone stopping in for the first time would get an unpleasant surprise. If I had any doubts about abandoning my old haunt, they were now erased. I really don't want to give my money to an arrogant dilettante who doesn't give a shit.