Playing Church as a Young Catholic

There were several coveted roles in this game. 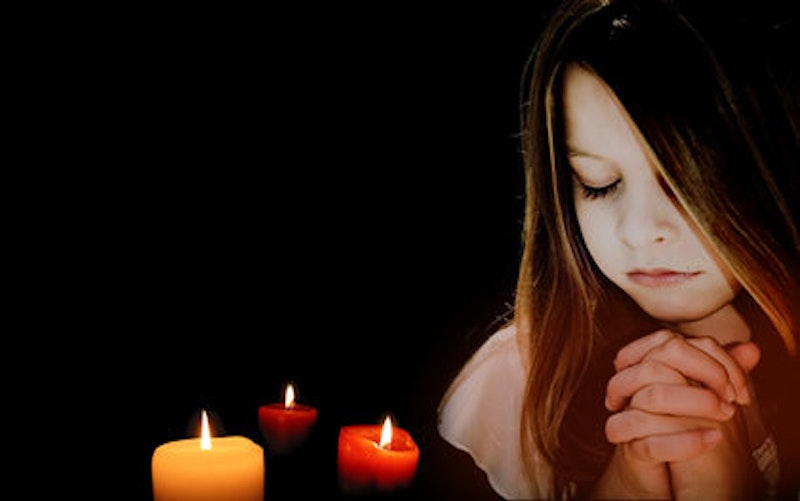 A child in the Catholic Church is a student of ritual. Each Catholic mass has a set of landmark moments—genuflection, the order of the scripture readings, the tinkle of a bell—meant to ground the congregation in a specific, sacred space.

When I attended Catholic elementary school, I was awarded a special addition to this ritualized service; Kyle Rey, an unassuming, freckled boy of indifferent faith would vomit at the exact same moment each mass. Just after the homily but before communion, Kyle would week after week be overcome with nausea. It was my favorite part of the service. It was just packed with mystery! Was he sick from boredom? Was it the incense? Was it the incense plus the polyester vest he was forced to wear every day? This sickly pre-sacrament event reinforced the cyclical nature of mass to me. Maybe it was Kyle’s unconscious transgression against the cog, but the event was incorporated into the ritual nonetheless. It became just another part of this sacred space of inevitability.

When my pre-teen peers were recruited to become altar boys and girls, I was one of the few to deny the opportunity. A line had been crossed—they were asking me to contribute more ostentatiously to the moving picture that seemed never to alter. And so it was surprising, despite this denial of the title “altar girl,” I continued to “play church” with my girlfriends.

One summer day that was too humid even to jump in Jacki’s above-ground pool, we retreated into her basement and came up with the idea to “play church.” There were several coveted roles in this game: priest, cantor, reader, and layperson, among others. The game, if nothing else, was accurate. The ebb and flow of music and scripture was naturally curated. We had mastered the ritual.

The game remained an option for several years, right alongside Mummy (a game in which someone “awoke from the dead,” which arguably may also be Christian-related) and The States Game (in which we chased each other on top of a huge, not-completely-accurate U.S. map). When playing church moved from an option to a questionable activity, probably around fifth grade, I looked back on the game with confusion. Why did I enjoy replaying this ritual over and over again, despite my distrust of the real thing? No matter how much the idea of Mother Mary or the animal-loving St. Francis interested me, it never made mass enjoyable. And it wasn’t enough to keep me a practicing Catholic in my adult life. So why did I choose to repeat this act among friends?

The first theory is one of control; by performing the act of mass we were claiming authority over it. The game shouts to the world, “Yes! These three girls are capable of being priests! And they can write a damn good homily!” But this theory falls apart when I consider the fact that we weren’t innovating. We remained in the lines of a Catholic mass, through and through. There was never constructive criticism toward the source of the game, just an adherence to the already-in-place structure. Only this time we played a new, perhaps more authoritative role within the hologram.

Our bodies are designed to form habits. We are born addicts. If we obsessively chew food on one side of the jaw it can adversely affect our posture, and still we continue to chew on the one, more natural side. Going to church once or twice a week on top of a class dedicated to religion, in addition to near constant prayer, it all creates a loop. As a little girl playing church with her friends, I was merely continuing to spin.

Pope Francis will visit Philadelphia later this month, the diocese to which my childhood church belongs. Instead of the glitzy pope mobile, Pope Francis drives a Ford Focus. Instead of living in the traditional papal apartments, he lives in a more modest suite in the Vatican guesthouse. He’s a man of redesigned ritual, which stands in a stark contrast to Philadelphia, one of the most conservative dioceses in America.

Even though most people focus on the more progressive of Pope Francis’ proclamations, his most common teaching is compassion toward the poor. During the Address to the Archbishop of Canterbury in 2013 for example, he stated, “Among our tasks as witnesses to the love of Christ is that of giving a voice to the cry of the poor.” What would happen if service to the poor replaced the ritual of service within the walls of the Church?

I imagine serving food to the poorest people of Philadelphia as a child. I imagine volunteering my time to rebuild parts of the city I called home for so many years. These are the rituals that I wish formed my childhood.

I don’t believe there’s anything wrong with playing church as a child; we were innocently living out the rituals of religion. But looking back pulls us forward, and in my case, toward a more appropriate ritual to serve the poor.